Púca 2019: A new festival that brings Halloween back to its Celtic roots

Held across three towns, Púca aims to be a darker counterpoint to the St Patrick’s Festival 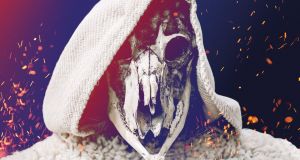 Halloween may be about Superman costumes, carving pumpkins and sugar comas for some, but the occasion officially has its roots in the Celtic tradition.

And after the Irish diaspora exported Halloween to America centuries ago, a new festival is claiming it back under its original guise: as the festival of Samhain.

In its original incarnation, Samhain marked the end of the Celtic year and was seen as a time of transition. The veils between this world and the next were drawn back so that spirits could move freely between them.

The Púca festival will be held across Ireland’s Ancient East, in the towns of Athboy, Drogheda and Trim, this Halloween. The three-day event is a collaboration between Fáilte Ireland and events production company Curated Place, in partnership with Meath and Louth County Councils. Curated Place has presided over events in the UK, Iceland and Norway, including the Spectra “festival of light” in Aberdeen. And Púca certainly boasts an intriguing, well-thought-out weekend.

Together, Fáilte Ireland and Curated Place have cooked up quite the line-up: Pillow Queens, Lisa O’Neill, DJ Kormac, David Keenan and Jerry Fish all feature on the bill, although music is just a small slice of what’s on offer.

There will be events in historical areas, such as a recreation of the symbolic lighting of the Samhain fires near the Hill of Ward (Tlachtga) in Athboy. A Samhain procession will take place on Halloween night in Trim, with the town’s castle providing a suitably dramatic backdrop to several events. The Púca Food and Craft Market, with a definite nod to the Harvest theme, will also showcase local producers in the grounds of Trim Castle.

In Drogheda, expect a retelling of the Irish epic the Táin Bó Cualigne, by Candlelit Tales. Elsewhere in the weekend, a special screening of Benjamin Christensen’s legendary silent horror Häxan will take place at Droichead Arts Centre, featuring a new score from Dublin-based musician Matthew Nolan.

Overall, expect spectacle and merriment galore as laser installations, storytellers, poets, aerial dancers, and musicians draw on the natural strengths of each area.

“By working with more than one town, we can spread the footfall and offer different experiences in different places,” explains Curated Place director Andy Brydon. “We’d expect Trim to offer family events, then host a music stage. In Athboy, you’re looking at a really family-friendly offering, while in Drogheda, we hope to create sustainable and meaningful events held across the town.”

“It’s not about just sticking on a scary mask, although there is certainly a scary element to Halloween,” he adds. “There’s a feeling that some of these spirits might take you off into the otherworld, and that’s why you dress up and try and lose yourself in the crowd. It’s about being able to lose your identity and be a character for a bit.”

The plan, such as it is, is to give a 21st-century spin to the age-old tradition of Samhain. Fáilte Ireland also hopes to align Halloween with Ireland in the mind of international visitors, and bring the day’s Irish heritage back from the dead. Think a wintry, spiritual and less sodden counterpart to St Patrick’s Day.

“We really wanted to steer away from the Americanisation of Halloween, and we expect that in each place, the whole town will get involved,” notes Brydon. “In Athboy, for instance, we are working with Gemma McGowan, who brings together the community interested in the spiritual aspects of Halloween from a folklore point of view. We’re helping to run a bigger, safer and better managed parade than it has been in the past.”

A cynic might suggest that Púca is a commercialisation of traditions and events that have already been in place for years.

To which, Brydon notes: “I would invite [people who say that] to come and make a judgment on what happens, rather than projecting. Our intention is to support the traditional aspects of things. As it was the coming of winter, people shared stories, food and entertainment. It’s about bringing people together: it’s not a historical festival, but it is about grasping that deep cultural tradition and interpreting it in a modern way. We’re not going to slap a logo and stick a flashy light on it. We’re an arts company, not a commercial events company. We’re working with artists here, not ad companies.”

“It’s true that it’s [Samhain has] been around for centuries and there has been a lot of local celebration around it,” concedes Orla Carroll, director of product development at Fáilte Ireland. “It’s about commercialising it, but it’s not Disney-fying it with pumpkins. We are doing it in a way that stays true to our history and also helps the local communities.”

Púca is the result of feasibility research that Fáilte Ireland undertook in looking for a new festival for Ireland. Talking to visitors, archaeologists and historians, they realised that they could create not just a meaningful event, but one that would operate away from the usual tourist hotspots, and after peak tourist season.

“To create a high-impact festival, you have to have something authentic, original and around someone’s passion point,” explains Carroll. “We did a lot of research in the UK, France, Germany and the US to see what type of experience would motivate people to travel to Ireland.”

The Púca organisers’ plan is to attract 100,000 visitors by 2022. In addition to being a boon for artists, creatives and theatre-makers, it’s also thought that local economies will benefit, to the tune of about €12 million.

“We’ve got ambitions to grow it year on year, and the aim is to get international visitors to come and hear the stories that have been associated with the area year-round,” explains Brydon. “We want to give people the chance to contribute and feel ownership of the festival.”

Adds Carroll: “It’s not all about kids trick or treating – in fact, though Púca is family friendly, it’s a little bit more for grown-ups. We’re all big kids at heart, and at Halloween we still want to celebrate it.”

Five other events to try this Halloween

Deep in the Boyne Valley, the Spirits of Meath festival offers family fun by day and then frights at night. Expect spooky tours of Slane Castle, pumpkin picking and Oktoberfest at the Lime Kiln pub. Runs until November 6th. See spiritsofmeath.ie

The Bram Stoker Festival – a celebration of Dublin’s most famous Gothic son – is quickly becoming the capital’s biggest Halloween event (October 25th-28th). Offering up four days of theatre, spectacle, visual arts and music, the city takes on a particularly eerie vibe on the festival organisers’ watch. For tickets and info, see www.bramstokerfestival.com.

Arguably the big daddy of Ireland’s Halloween celebrations, Derry Halloween (October 26th-November 1st) draws a massive crowd for its huge street spectacle, as well as a diverse bill of arts, culture and food events all over the city. More information can be found at derryhalloween.com

About 70,000 people are expected to line the streets of Galway for this huge (and free) Halloween parade on October 27th. The event – which is also titled “Danse Macabre” – will kick off at 5.30pm from Macnas’s home on the NUI Galway campus and will weave its way through the streets. Macnas.iecom has all the information you need.

The ‘creepy’ deepfakes anyone can create: How Deep Nostalgia animates your family photos