From hundreds of kilometres above Earth, Chris Hadfield has tweeted his way into Irish hearts 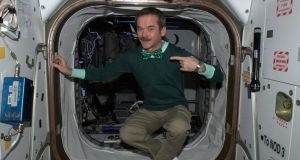 As evidenced by the lack of ticker-tape parades, Ireland has yet to put an astronaut in space. Bill Cullen used to boast that he would become the first, but that has yet to come to pass. How the history books would have had to clear their throats before each mention of that moment of national glory. Yuri Gagarin. John Glenn. Ahem, Bill Cullen.

Anyhow, having waited this long for Ireland to send some plucky sort into orbit, it turns out that someone has snuck up there while we weren’t paying attention. His name is Commander Chris Hadfield. He isn’t Irish but Canadian.

Nevertheless, his daughter lives in Dublin, and he tweets in Irish, sings a mean Danny Boy , wore at least three of the 40 shades of green on St Patrick’s Day and so regularly photographs Ireland from space that you’d want to be wary of sunbathing topless in the back garden, just in case.

Commander Hadfield – a man with a moustache so fine you feel that you could buff your best shoes on it – has become the latest social-media star of the International Space Station. There has been a succession of them in recent years, as astronauts have talked the world through their days and taken requests for photographs from citizens of various countries.

The result has been a mix of wonder and the workaday that is endlessly compelling. And it is a precursor to the next great leap in space travel: the era of the everyman astronaut.

There was a time when astronauts were held up as heroes, pioneers, adventurers. That faded quickly, their exploits were only occasionally noted, and their names were remembered only if appended to a tragedy.

We are, though, seeing a return of the astronaut in the public consciousness, because they’ve found a way to make themselves seem grounded even at 370km above Earth.

A natural TV presenter, Commander Hadfield has been making YouTube videos about how he clips his nails, makes peanut-butter sandwiches and the like, and there is the sense that even while commanding a multibillion-dollar spacecraft he’s also doing what so many do online: goofing off.

Neil Armstrong was a great hero of the 20th century, but he never seemed to be the goofing off type. (Buzz Aldrin, on the other hand . . .)

We’ve been spoiled by the early achievements in space, and the regular commute of the space shuttles, so a great deal of the awe has gone out of space travel. Even the most extraordinary achievements have become ho-hum.

Only this week, for example, there were (contested) claims that Voyager 1 , a small spacecraft that left Earth in 1977, has finally exited the solar system, as it is no longer being buffeted by a bubble of cosmic particles ejected by the sun.

Even without confirmation of that, it was a worthwhile reminder of a tiny probe that has travelled a remarkable distance. It is now a full 18 billion kilometres away – 123 times the distance from Earth to the sun.

Let’s just repeat that: human beings have sent a space ship that is about to leave the solar system. It has a twin following a couple of billion kilometres behind. Together, they will travel on through the universe for all eternity.

At some point, about five billion years from now, Earth will either be destroyed by a dying sun or cut loose in a moribund solar system. All traces of humanity will have been wiped from the planet. But the two voyagers will still be out there in the universe, relics of a lost civilisation, testament to the advancements of 20th-century
humanity.

Humanity shrugs. So what? That’s not what space travel is about right now. It’s about the coming generation of civilian astronauts. It’s about private space companies that want to send people on one-way tickets to Mars. It’s about Lynx running a competition to send people to space. And when the makers of an acrid BO camouflage for teenage boys are sending people into space, then you know the stars must be our destination.

Chris Hadfield and his crew are among the privileged few now. There is great satisfaction in the way their appreciation of their circumstance has motivated them to share the adventure with us.

They went through what will someday be seen as the old-fashioned route to space, but they are among those who have become pioneers of a different sort: they are bringing the ordinary to the extraordinary.