Olwen Fouéré on the price that revolutionaries pay

The actor’s role in ‘Danse, Morob’, a play that touches on the dirty protests of the Maze and other traumas, explores how revolution can break those whom others see as heroes 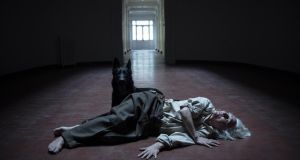 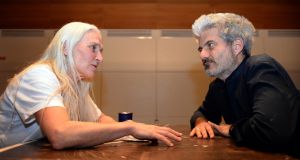 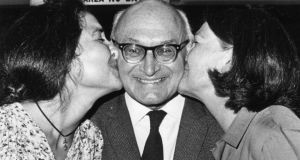 A woman advances through mist and forest, led by a pack of yelping, growling dogs. It was the first image that came to the award-winning French novelist and playwright Laurent Gaudé. Then he imagined the same woman running with an old man, her father, on her shoulders. And he knew it was somehow linked to the Troubles in Northern Ireland.

The Franco-Irish actor Olwen Fouéré, for whom the play was written, has translated Gaudé’s powerful text. She will codirect it and play the lead role in Danse, Morob at Project Arts Centre in Dublin next week.

“I want to avoid a possible misunderstanding,” Gaudé says. “For me this is not an Irish play. I would not be so presumptuous – I don’t know enough about Ireland. But it’s a play that tries to catch something, not of Ireland but of conversations, perhaps of the atmosphere I sense through Olwen.”

During a stay in Paris in 2009 Fouéré came across an earlier Gaudé play, Sodome, My Love. “It was about a woman who had been buried in salt for thousands of years, and it starts to rain and she comes to life and tells the story of how Sodom was destroyed,” Fouéré says. “I found it and read it at one sitting in a cafe in the Place de la Sorbonne. The next morning I bought the rights.”

Gaudé watched the world premiere of Sodome, My Love, performed by Fouéré, also at Project Arts Centre, in 2010. He attended Riverrun, Fouéré’s adaptation of James Joyce’s Finnegans Wake, at the Irish College in Paris. “She has amazing presence, such a capacity to do what she wants to with her voice and body,” Gaudé says.

The living and the dead

Each time Fouéré visited Paris she and Gaudé discussed the project that would become Danse, Morob. “There’s a magic-realist vein in both his novels and his plays,” Fouéré says. “A completely porous membrane between the living and the dead, and history that crosses over time . . . I felt very connected to his work . . . We are both interested in transgenerational memory. They are proving now that trauma can leave an imprint on the DNA, that it gets passed on to subsequent generations.”

Fouéré told Gaudé about her own father, the Breton nationalist Yann Fouéré, who sought political asylum in Ireland. She also talked about the no-wash protests at the Maze prison in the late 1970s, which he researched further.

Gaudé was haunted by images of the “dirty protests”. “I imagined a child to whom one says, ‘The man on the television is your daddy.’ He’s a hero in the Irish context, and to the child, because he’s the father. And at that same time the child knows the body has been degraded . . . There have been hunger strikes in many places in the world, but I know of no equivalent to the dirty protest.”

The daughter in Danse, Morob, identified only as She, is told by a former prison guard that when he and his mates dug up Morob’s coffin it was empty. The “old screw” also tells her that she carries on her skin “the same smell of shit as your father, because it will stick to your skin for centuries . . .”

She goes to see Old Seamus, who occupied the cell adjacent to her father’s. He still smells. “Never left me, after all these years,” he says. “The shit that was piling up, did you know? Day after day. Stinking up your nose so you can hardly breath. Until it dries. But you have to shit. And it keeps building up. Then, together, the decision, to spread it on the walls. Our own excrement. Big painted spirals of shit. Layers of it up to the ceiling. To say that we would never give in, that we were a lot further gone than they thought. They were afraid to come in to the cells. We were naked, and filthy, like druids fallen in a sewer.”

Danse, Morob, like Gaudé’s new novel, Listen to Our Defeats, is about the price of revolutionary struggle, the way it often breaks those whom others regard as heroes.

Gaudé’s oeuvre is characterised by the poetic, legendary aura he imbibed from Gabriel García Márquez and Greek mythology. Yet he never shrinks from harsh realities.

“I feel a massive responsibility to somehow impart the brutality of what happened,” Fouéré says of Danse, Morob. “But I said, ‘Maybe we shouldn’t use the words Long Kesh. Maybe we shouldn’t refer directly to the Maze.’ We discussed it a lot. Laurent said, ‘If the word is that powerful, why not say it?’ He was dead right.”

In one of the most moving scenes of the play, the dead mother recounts Morob’s release from prison. She brought the children in their Sunday best, to greet the hero. “I made as if to cross the road and come closer to him. I told myself that I had to go across . . . He raised his hand. As if to say stop. I froze.”

Morob turns and walks away. “I saw in his eyes that he was far away, and that he would never be ours again,” the Mother says. “He died in the struggle, Morob, somewhere on one of those nights in the cell where he sang under the punches and blows.”

When She finally finds Morob, living wild in the forest, he talks disjointedly, like a Beckett character. “I didn’t think of Beckett, but, yes, his speech had to be strange, missing words,” Gaudé says. “Beckett’s theatre is so great that for me it closes the door behind it. Beckett is the last point before the ocean. One cannot continue. To do Beckett after Beckett would be ridiculous.”

Gaudé was only 32 when he won France’s highest literary award, the Prix Goncourt, for The Sun of the Scortas, in 2004. The saga of five generations of an Italian family, it has been translated into 34 languages.

Gaudé is a prolific writer, having produced 26 plays and books in 17 years. The Goncourt made him known to a wide audience, in France and abroad.

In just three months this autumn Gaudé’s Listen to Our Defeats, about a jaded French spy working in Africa and the Middle East, his Iraqi archeologist lover, but also about Hannibal, Ulysses S Grant and Haile Selassie, sold 100,000 copies.

“You can’t say my books and plays have happy endings,” Gaudé says. “Because the characters have a hard time. But it’s never overwhelming or depressing. I’m interested in man’s capacity to remain standing, to have within him a kind of epic grandeur.”

In Danse, Morob father and daughter are reconciled in a final dance. “She is certainly more complete at the end than she was at the beginning of the play, when there is something missing in her,” Gaudé says.

Although he now devotes most of his time to novels, Gaudé says that he needs theatre too. “For example, the adventure with Olwen, only theatre makes that possible, the contact with actors, the collective project. It brings me out of the solitude of writing . . . It’s exhilarating to see your words become flesh, someone else’s voice and body on your words. It’s extraordinary. All of a sudden it comes to life, not exactly as one intended, which can be destabilising, but it’s marvellous.”