The best new Irish music of the week, featuring Wyvern Lingo, Fiction Peaks, Gavin James and I Have A Tribe 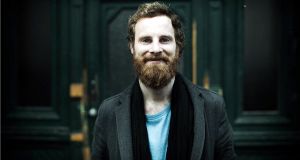 I Have a Tribe

Fiction Peaks - Spring's In Bloom
Imagine a chill orchestral-leaning indie band playing songs from the early catalogue of The Stone Roses? Now, you don't have to. The Dublin band's new track has that recognition to it - old-fashioned indie constructed with accomplished means.

Ciaran Lavery - Return To Form
Next month, Ciaran Lavery is among the Irish musicians heading to South By Southwest in Texas to participate in the music industry's massive maelstrom of new music. With over 25 million plays on Spotify already one album deep, and with gigs lined up in Austin at the streaming service's party and at the ranch of Willie Nelson, it seems Lavery is best placed to capitalise from the trip. The first song from second album Let Bad In (May 27th on Believe Recordings) confirms that hunch.

Wyvern Lingo - Beast At The Door
With the Rubyworks label and a close association with promoters MCD on their side, there was initially a danger that the Bray girls would find themselves thrust too quickly into a limelight they weren't ready for. Thankfully, each song they've released (the three most recent make up the Subside EP), has shown us a new side. Beast At The Door is a track built on lullaby melodies and a foreboding atmosphere that pervades the music and lyrics.

I Have A Tribe - La Neige
Patrick O’Laoghaire's music as I Have A Tribe has been galvanising into a strong identity around piano-based missives and crescendos. The first song from his forthcoming debut album Beneath A Yellow Moon (May 27th on Gronland Records) is not unlike the music of Conor O'Brien's Villagers in tone. O’Laoghaire's lyrics come across as if they are drawn from the pages of a book and musically, La Neige is comfortably and suitably of a different troubadour age.

ALBUM OF THE WEEK
The Gloaming - The Gloaming 2
The pedigree of The Gloaming's musicians are well-established at this point. The President of the country turns up to their gigs regularly, and why not? Martin Hayes, Iarla Ó Lionáird, Caoimhin Ó Raghallaigh, Thomas Bartlett and Dennis Cahill's music takes the traditional music and plays it with great authority, talent and alchemy between them. Album two, recorded in five days, sounds like it was captured at the source. Unadorned by effects and any major production, the twelve songs here playback as live as possible, spacious and aired from a studio in Wiltshire two months ago. When songs are this rich in musicianship, this sumptuous at its origins, this exploratory in recording, there's very little that needs to be done to them at all. Just press play.

DESERVED RECOGNITION OF THE WEEK
Brian Deady
When you're writing about new music daily, it's easy to forget that the world doesn't move as fast around you. Which is why we pause now in approval for recent developments for an artist this column has featured recently: Brian Deady. The Cork soul singer's first album in six years was perhaps not wisely released in early December when the end of year polls were becoming more prominent. The album's most immediate song, Clap Both My Hands, a CeeLo Green bluesy soul-pop song, has recently gained some traction on daytime radio via Today FM, and last Friday, via a performance on The Late Late Show which brought that catchy song into many more homes. This is only a good thing, as Clap Both My Hands has the capacity to be a hit (it's currently trending on Shazam in his home county), if given enough mainstream support.

VIDEO OF THE WEEK
Gavin James - Nervous
Director: Christian Tierney
Employing the street-captured style that French video site La Blogothèque popularised works well for a song from Gavin James. The songwriter's music is often polished to maximise its pop potential, but the video places James' central appeal at its core. It builds from an a capella performance on the side street of Dublin's Olympia Theatre, into an empty venue before a simple but clever cut lays the appeal bare in front of a responsive audience.