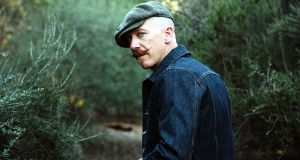 Foy Vance - She Burns
Bangor singer-songwriter Foy Vance has been doing his darnest in the past few years to make sure you don't confuse him with Aussie singer-songwriter Vance Joy. His second album was released worldwide on Glassnote Records in 2013 and it won the Northern Irish Music Prize too. The Scottish-based musician has recently picked up touring support from Ed Sheeran. Don't let that put you off. Nor let the news that his new album The Wild Swan will be out on Sheeran's Gingerbread Man Records. Sheeran gave Vance full control of his album (and presumably money) which was recorded in Nashville. She Burns, the album's first single suggests Vance had his own way with an idiosyncratic yet wide-ranging charm.

Bell X1 - The Upswing
The Bellies are back with a new album later this year called Arms, their first in three years, and the trio seem to be enjoying setting their own pace on their seventh release. The Upswing takes a downbeat approach with tender-drawn lyrics. It's reflective and hushed sure, but Noonan still finds time to drop a Star Wars reference too.

Cinema - Lunar
The Kildare electronic producer Peter Fleming (formerly of Effy) has been creating some low-tempo electronic synth tracks that have impressed with their luminescent production. Fleming will release a debut full-length next week and Lunar has all the hallmarks of his signature style.

Slow Skies - Winter Night
A pared-back song from Karen Sheridan and Conal Herron’s Slow Skies is the latest thing we've heard from the duo after a very quiet 2015 on the recording front. Winter Night is a seasonal piano ballad, about longing to experience a piece of the past. I Have A Tribe's Patrick O’Laoghaire plays piano on the track and production is by Ber Quinn.

ALBUM OF THE WEEK
February & Mars - February & Mars
Last year, Galway duo Augustus & John released a fine under-the-radar album containing "Sunshine jams & melodic mood swings”. The same month, another Galway duo, also with the conjunction-featuring, season-themed name February & Mars, released an open-minded debut album that was promoted even less than their peers. Which is a pity, as Carl Ramberg and Jack Considine's album is just as essential, trading in analogue drum-machine synthesizer songs that use guitars, a deep knowledge and a love of music's genre fringes to produce a record that could be described as danceable, dreamy, detailed and discerning. Co-production comes from Galway DJ John Daly who gives the album a cohesive sheen. If you count Brian Eno, Guns 'n' Roses, cosmic disco, house and techno as interests, as Considine and Ramberg do, February & Mars is for you


NEW ARTIST OF THE WEEK
Ailbhe Reddy
It's still early days for the Dublin singer-songwriter. Two years ago, Reddy debuted with the finger-picked demo-style folk of Flesh & Blood. Her song Cover Me was featured in Today FM's Shave Or Dye campaign and small slots at summer festivals such as Knockanstockan and Spirit Of Folk. Her latest track Distrust marks a turning point towards a more developed sound. With the production help of Darragh Nolan, is more complex and memorable than what has gone before.

VIDEO OF THE WEEK
Ciara O'Neill - Ghosts
Video by Ashling Lindsay
A good music video is often about accentuating the qualities of the song. Which is exactly what Belfast animator Ashling Lindsay does to Northern Irish singer-songwriter Ciara O’Neill's atmospheric folk track. Its simple, old-fashioned yet effective animation brings extra life to the recording.