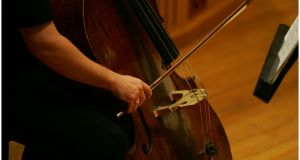 ‘The work of Irish composers has suffered from the same kind of do-goodery that has hampered the Irish language.’ File photograph: Bryan O’Brien/The Irish Times

It wasn’t anything to do with George Jackson’s conducting of the works on the programme: Brian Boydell’s In Memoriam Mahatma Gandhi (1948), Ina Boyle’s Psalm (1927) and Elegy (1913), with Martin Johnson the cello soloist, and Charles Villiers Stanford’s Irish Symphony (1887).

It was the fact that the NSO’s programme planners saw fit to create a special, predictably sparsely attended ghetto for these Irish works.

The ghetto actually has a name. It’s called Towards 2022, which NSO general manager Anthony Long described in 2018 as a “mini sub season” where “the focus is on Irish classical music and music with links to our rich and underexplored classical music heritage”. To be fair to Long, it’s not just an Irish ghetto. Place has also been found in other Towards 2022 concerts for music by English composers Arnold Bax, Ralph Vaughan Williams and EJ Moeran.

Don’t get me wrong. I think it’s great to see the NSO engaging more fully with our native musical heritage. It’s the creation of the ghetto that’s the problem.

RTÉ and the National Concert Hall are already jointly involved in a new music ghetto, the New Music Dublin festival, which is due to run from Thursday, February 27th, to Sunday, March 1st, though information on this year’s programme has yet to be announced.

And the NCH has its own special ghettos. There’s one for music by women, Resound – NCH & Sounding the Feminists Series, previously branded the Female Composer Series. And then there’s the bluntly titled Female Conductor Programme.

The function of the ghettos is pretty clear. They tick certain boxes and fulfil awkward obligations so no one can say that particular challenges are not being addressed. The best way of seeing this is to look at how the ghettos actually impact on the wider work of the institutions.

Take the National Concert Hall’s (NCH) International Concert Series, its flagship activity, and the one which accounts for the largest slice of its programming budget. The current season offers no platform whatsoever for female conductors or music by women. Obviously, those boxes are safely ticked elsewhere.

And even when it comes to work by non-dead composers, the reach of the international series is very narrow. There are pieces by György Kurtág, who turns 94 next month, Krzysztof Penderecki, who will be 87 in November, and Rodion Shchedrin, who will be 88 in December, choices which seem to reflect the fact that pre-octogenarians will be dealt with in the New Music Dublin festival.

A similar attitude might well explain the NSO’s attitude to living composers in its current subscription series. The average age of the featured living composers is 64, and just two of them, Albert Schnelzer and Caroline Shaw, are under 50.

Look at it this way. When Beethoven, Brahms, Tchaikovsky and Rachmaninov were all alive and contributing to what is the standard repertoire of today, their age alone would probably have disqualified them from consideration by the programmers of either RTÉ’s or the NCH’s biggest series.

This season, and most other seasons, too, women and Irish need not apply for the NCH’s flagship offerings. The NSO, where Nathalie Stutzmann is principal guest conductor, is rather more embracing. It does also feature Irish composers outside of its Towards 2022 ghetto and it finds place for female composers, too.

Priorities and prejudices have the strangest ways of revealing themselves. There are some classic cases in point in the NCH’s season brochure. The 10 strands of the current Chamber Music Series are plugged without the mention of a single living composer or a single female composer. The captions for participants in the conducting course just read “Female Conductor Programme”. And the captioning in general is done in inverse proportion to need. If you’re well-known you’re identified. If not, the caption is likely to be generic or simply absent.

Beyond the Irishness, the programme is interesting from a 21st-century perspective for its gender balance, its setting of Irish texts, and the fact that the average age of the composers was 39.

In thinking about all of this it’s impossible to ignore the facts of musical history. The work of Irish composers has suffered from the same kind of do-goodery that has hampered the Irish language. The direction taken by leading composers during the 20th century challenged existing audiences beyond their level of tolerance. New music/contemporary music/20th-century music got itself a bad reputation which living composers have struggled to shake off.

But, as was pointed out by Christopher Gibbs, keynote speaker at an international symposium on Public Musicology in Dublin three years ago, the origin of the problem actually goes back nearly 200 years.

Gibbs identified the turning point as the concerts given in memory of Beethoven after the composer’s death in 1827. At that point, the notion of historical canon which is still with us was born.

So, in 2020 when we’re commemorating Beethoven’s 250th anniversary, it’s not entirely wrong to suggest it’s Beethoven’s fault that contemporary concert life has become so choked up with the music of the past.