What's the best gig ever to take place in Ireland?

A new book asks music critics and fans that very question, and as you'd expect, the answers vary widely 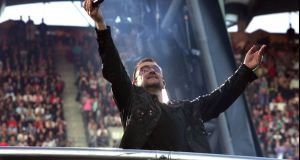 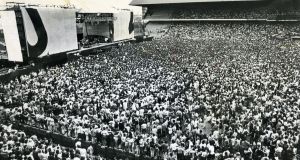 Sometimes, as Sean Spicer is finding out in the White House, it’s the simple questions which are the hardest to answer. For music fans, and especially those who write about or talk music for a living, it’s the questions of bests and favourites which cause you the most head-scratching. What’s your favourite album? Who’s your favourite act? And, hardest of all, what’s the best gig you’ve ever seen?

I can tell you what’s my favourite album – Marvin Gaye’s What’s Going On – and I can explain the reasons why this is the case until the cows come home and go out again the following morning. There is no such thing as a favourite act once you go beyond your teenage years. That sort of carry-on ended when you stopped scribbling band names in marker on your schoolbag.

But the issue of a best gig, a favourite gig, often can’t be answered in quite so righteous and absolute terms. If you’re brutally honest with yourself, the gig which stands out in your memory changes as the years go by.

It stands to reason because your horizons change. When you’re a teenage or twentysomething music fanatic, your favourite gig is down to a certain confluence of circumstances, all of which will have completely changed within a decade or two. Fondness or nostalgia may have you looking back with affection, but you’ll also have added a whole slew of other shows to the equation at that stage.

It was Dublin punk rock and DIY scene veterans Niall McGuirk and Michael Murphy who got me and many others in the Irish music community thinking about favourite gigs. They put out a call for people to pen some words about their favourite live shows and the returns were collated into a just published book entitled In Concert: Favourite Gigs of Ireland’s Music Community. All proceeds from the publication will go to the Irish Red Cross’ Syria Appeal.

The shows which are contained in the book are as long, varied and colourful as the cast of characters who’ve contributed. The book opens with Chiswick Records and Thin Lizzy mover and shaker Ted Carroll listing Bill Haley & The Comets at the Theatre Royal in Dublin in 1957. There are mentions for Leonard Cohen, Kid Creole & The Coconuts, Christy Moore, Laurie Anderson, Tom Waits, Fleetwood Mac, Planxty, Iggy Pop and loads more. Six different U2 shows are listed, four Therapy gigs get written up and the same 1977 Dublin show by The Clash is listed by three contributors.

What’s clear when you read the words in the book by the likes of Smiley Bolger, Colm O’Callaghan, Heathers, Emm Gryner, Pete Holidai, Cáit O’Riordan, John McKenna, Ciaran McLaughlin, Mick Heaney, Tony Clayton-Lea, Des O’Byrne, Elvera Butler, Aidan Walsh and dozens more is the passion. There are numerous reasons why each of them ended up citing the gig that they did, sometimes as much about what was happening in the stalls as on the stage. The music, though, ignited the passion and that’s what burns through on the page.

What’s also striking is how many of these shows you remember because you were there or can recall people raving about them afterwards. Even before the internet’s age of awesome, there was considerable word-of-mouth consensus about what constituted a great gig. It would be interesting to see the gigs which other music fans and gig-goers would pick for a volume like this.

Me? I picked The Gloaming’s show at Dublin’s National Concert Hall in January 2014. You’ll just have to buy the book and support the cause to find out why.

More information on In Concert at culturie.wordpress.com