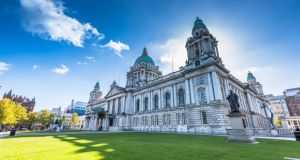 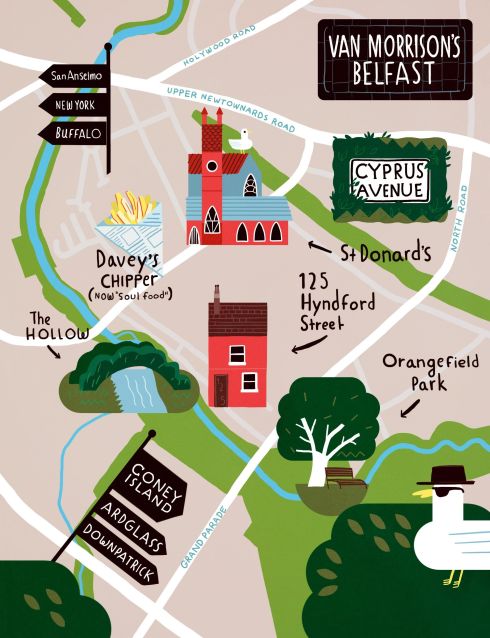 Number 125 Hyndford Street, in east Belfast, doesn’t look like the cradle of a lifetime’s dreams, memories and associations. It’s a tiny, blank-faced two-up-two-down terrace house, no different from any of the other red-brick homes alongside it. That’s apart from the discreet plaque beside the front door, which announces that Van Morrison was born here on August 31st, 1945.

His father, George, was an electrician at the nearby Harland and Wolff shipyard; more significantly, George was also a keen collector of jazz and blues records, which he bought from a man called Solly Lipsitz, who owned Atlantic Records on High Street.

Over his songwriting career Morrison has returned again and again, in spirit, to his childhood home and its nearby streets, rivers and parks, and these places have never lost their hold on his imagination.

“Take me back, take me way, way, way back,” he murmurs in On Hyndford Street. “Where you could feel the silence at half past eleven / On long summer nights / As the wireless played Radio Luxembourg / And the voices whispered across Beechie River . . .”

Picking apples, playing around Mrs Kelly’s lamp, stopping at Fusco’s ice-cream shop: in a few brief words Morrison invokes an entire world, the magical summer world of childhood, where you come home at night “feeling wondrous and lit up inside, with a sense of everlasting life”.

Eamonn Hughes, who recently edited a collection of Morrison’s lyrics, Lit Up Inside, published by Faber and Faber, says that what Morrison does for this part of east Belfast was what Seamus Heaney did for Bellaghy, in Co Derry: turned it into his imaginative terrain.

“The actual co-ordinates can be mapped, but this is unique to him,” Hughes says. “One of the reasons I love On Hyndford Street is that it’s saturated with all kinds of music and culture, drifting in on the air – not just the sounds floating across the Beechie river but Debussy coming in on Radio 3, hymns, gospel singing, Radio Luxembourg. If you know Hyndford Street itself, as an inner-city working-class terrace – well, this is not the first thing that springs to mind.”

Shock to the system

Another song that Hughes chose to include in the Morrison anthology was The Story of Them, which traces the trajectory of Morrison’s R&B band, formed in 1964. The arrival of Them was a shock to the city’s system: “some cats with long, long hair . . . barred from pubs, clubs and dancing halls . . . wild, sweaty, crude, ugly and mad”.

Listen to the interview in full

But as the music journalist and broadcaster Stuart Bailie points out, Them wasn’t Morrison’s first group. That would be The Sputniks, a skiffle band formed when he was just 13, involving an instrument improvised from a piece of lead piping rescued from the nearby Beechie river, which the band members christened a “zobo”. The Sputniks, who rehearsed in an alley behind Hyndford Street, ended up performing at several local cinemas.

“The Story of Them reads like a map of Belfast, the city defined by music,” Hughes says. “He writes about playing in the Spanish Rooms, on the Falls, and playing in the Maritime Hotel. He talks about the blues coming rolling down Royal Avenue. There’s a deliberate sense of recasting the city in terms of its music, and the music he’s talking about isn’t the music that people normally associated with Belfast.”

Morrison creates a similar effect in St Dominic’s Preview, where he swings from Edith Piaf’s Paris through San Francisco and Buffalo, on Hank Williams’s railroad train, before returning again to the “chains, flags, badges and emblems” of Belfast. “It’s a way of showing that Belfast is on a footing, musically, with all these other places,” Hughes says.

Around the corner from Morrison’s old home on Hyndford Street is the Hollow, made famous in the 1967 single Brown Eyed Girl, as a place of early teenage seduction. The Connswater river – the proper name for the Beechie – forms in the Hollow, where the Knock and Loop rivers join. It’s difficult to get a sense of its former wild charms today, because it’s currently a building site; it is being expanded as part of the Connswater Community Greenway, a pathway through east Belfast.

And you have to seriously exert your imagination if you’re in search of “pasty suppers down at Davey’s chipper”, on Beersbridge Road, invoked in Morrison’s song A Sense of Wonder. The original has long since been tuned into a Chinese restaurant. (The song contains a spoken incantation remembering “gravy rings, Wagon Wheels, barmbracks, snowballs”, all of which continue to be regularly consumed Belfast delicacies.)

The Castle Picture House, on Castlereagh Road, also from A Sense of Wonder, is now a furniture showroom. But Elmgrove Primary, where Morrison first went to school, and St Donard’s Church, where his parents were married – its bells ring in On Hyndford Street, and Morrison refers to the “six-bells chime” in Beside You – are still intact.

And Orangefield Park, another of Morrison’s dream-like haunts – “On a gold autumn day / You came my way in Orangefield / Saw you standing by the river in Orangefield” – is still a wide, green space in this otherwise built-up part of town.

Anthony Toner, director of Eastside Arts Festival and a respected songwriter himself, says that the remarkable thing about Van Morrison is his ability to transcend the local.

“He’s very specific about east Belfast. Any artist can be specific about their own geography, but you run the risk of being parochial. Van manages to turn it into something universal. A street corner becomes a universe. It’s dazzling, and not many people achieve it. Dylan, Paul Simon, Joni Mitchell, Van Morrison: these are among the few that can.”

It’s true that Morrison seems more at ease than at any time since his childhood, playing numerous gigs in and around the city, at places like the Harp Bar, Dunluce Castle and the Europa Hotel. There were even three concerts at his old secondary school, Orangefield High, last summer. “When I was a young boy back in Orangefield,” he sang, as old teachers and classmates stood watching, “I used to look out my classroom window and dream . . .”

“A place where I could think”

But if there’s one place in Belfast that is indelibly associated with Van Morrison, it is Cyprus Avenue. Barely a 10-minute walk from Morrison’s first home, the rich, sun-dappled street is worlds away from the tight, terse rows of inner-city terraces. In one of his more communicative moments – in public, Morrison can be notoriously gruff and monosyllabic – he described it as “a place where there’s a lot of wealth. It wasn’t far from where I was brought up, and it was a very different scene. To me it was a very mystical place. It was a whole avenue lined with trees, and I found it a place where I could think.”

Although other locations in the Morrison mythology may fail to evoke the mysticism with which he invests them, it’s different on Cyprus Avenue. Here, at last, in the silence, under the heavy summer canopy of leaves, it’s easy to imagine the “clicking clacking of the high-heeled shoe” as Madame George comes tripping along.

Van Morrison will celebrate his 70th birthday with two live performances on Cyprus Avenue, on August 31st, as part of Eastside Arts Festival