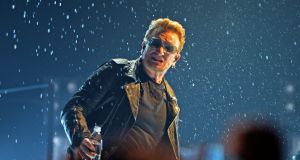 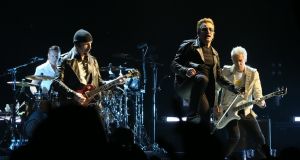 Larry Mullen Jr, The Edge, Bono and Adam Clayton of U2 performing at the band’s sold-out gig at the SSE Arena in Belfast last November. Photograph: Niall Carson/PA Wire

U2 have confirmed a new world tour for next year and that their next album, Songs of Experience could be released as soon as September or October of this year.

The band were talking to a Spanish fansite last week while in Valencia for the wedding of their childhood friend - Dublin optician, Reggie Manuel.

The new album will be a companion piece to 2014’s Song of Innocence in that while the former album dealt with their teenage years on the Northside of Dublin, Songs of Experience will deal with the sudden rush of fame they had in the 1980’s beginning with their Live Aid concert experience and becoming the biggest rock band in the world on the release of 1987’s The Joshua Tree.

The Songs of Experience tour will begin in March 2017 and will take in the US, South America, Australia, Asia and Europe, with an outdoor Irish show in the summer of 2018 a distinct possibility.

The band have already confirmed two major U S gigs - a show at the iHeartRadio Music Festival in Las Vegas on September 23rd, followed by another show in San Francisco on October 5th as part of the Dreamforce web conference.

Speaking last week, Bono said “you might see a few things in September or October” meaning an album launch or a special one-off show to mark the band’s 40th anniversary on September 25th. It was on that date in 1976 that the four members of U2 first convened in Larry Mullen’s kitchen in Artane for a rehearsal.

The pattern of a September album release for a tour beginning the following March was set with the release of the last album, Songs of Innocence, which was available for free on iTunes in September followed by the tour six months later.

It is likely that the forthcoming Songs of Experience will have a low-key release and given the significance of their 40th anniversary, could feature a launch in their hometown.