Live music is struggling to find a path out of coronavirus lockdown. Fans were appreciative 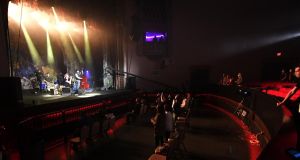 Travis McCready sang Riders, a song about perseverance, earlier this week in a former Masonic temple in Arkansas as Americans returned to hear live music in a concert hall for the first time since the Covid-19 pandemic pulled the plug on the United States’ entertainment industry.

A few hours earlier, across the Atlantic in the German city of Wiesbaden, Günther Groissböck had peered beyond the bright stage lights into a darkened theatre and seen only every fourth seat occupied. It’s not usually a good sign. “Is it because we’re no good?” the Austrian baritone recalls thinking as he stepped before the sparse audience at the State Theatre of Hesse. “Is it because we’re unpopular?”

Both concerts were experiments in staging live music in the age of social distancing, offering a preview of what music fans may expect from an industry struggling to find a path forward.

US concertgoers had to buy clusters of seats, aka fan pods – presumably for a group of friends comfortable being in proximity – with scores of empty seats roped off on all sides to ensure space between strangers

At TempleLive, in the Arkansas city of Fort Smith, concertgoers were required to buy seats in clusters, or what promoters call “fan pods” – presumably for a group of friends comfortable being in proximity – with scores of empty seats roped off on all sides to ensure space between strangers. Of the 1,100 seats available, just 20 per cent were available for sale.

In Germany, at least three empty seats separated every occupied one in the neo-Baroque auditorium, which normally holds 1,000 but accommodated fewer than 200 on Monday. And even with such caution, this is still a potentially risky – and hotly debated – attempt to revive live performance as the first wave of the coronavirus pandemic ebbs in Europe.

Both experiments could serve as a model for other venues – or as a warning, if anyone who attended gets sick.

Outside TempleLive, LaLisa Smiddy and Marcy Randolph, best friends from Duncan, Oklahoma, embraced the return of live music. The 53-year-olds drove almost four hours to hear McCready, a country singer, and then had their temperatures taken before they could enter the concert. “We’re happy to be here,” Smiddy said. “I’m one of the more paranoid ones out there, and when I saw everything this venue has done, I was ready to come. I think they’ve done an outstanding job.”

Many fans said they were ready for some semblance of regular life, even though the coronavirus pandemic had made this concert unlike any they had ever attended. For Daniel Neathery, a 33-year-old from Benton, Arkansas, the new normal meant having to buy six tickets, at $20 a pop – an entire fan pod – even though he came alone. “For me it was worth it to have some normalcy,” he said.

At the door, fans received not only a temperature check but also a mask if they did not have one, and they were required to wear them throughout the show

Dave Poe, the New York-based promoter behind the concert, predicted smaller venues like TempleLive would be the first to reopen because of lower operating costs, fewer staff members and the hesitation of some top-billed artists who work the larger arenas to expose themselves and their fans to the coronavirus – planned tours of superstar acts like Taylor Swift, the Black Keys and Bob Dylan remain mothballed.

The economics of a show that prioritises social distancing played out here, as a full staff of nearly 30 employees worked a house that was 80 per cent empty. Ushers, wearing masks, guided patrons through the hallways to enforce one-way traffic flow. Others monitored the bathrooms to enforce social distancing. Bartenders worked in tandem, one exclusively handling money, the other dedicated to food and drink.

Even with the show selling nearly all its available tickets, Lance Beaty, the president of the company that owns the venue, said he lost money on the night. “It’s clearly not a financial decision that we did this,” he said. At the door, fans received not only a temperature check but also a mask if they did not have one, and they were required to wear them throughout the show. Yellow caution tape partitioned the red velvet seats. Bathroom sinks and urinals were taped off so that patrons never got too close. Arrows on the floor guided one-way traffic. Dots indicated six-foot distances.

The driving force behind the Wiesbaden event was Uwe Eric Laufenberg, a veteran actor who is the theatre’s director – and a vociferous opponent of lockdown who stirred a political firestorm when he called government-mandated restrictions a violation of the German constitution and suggested reaction to the pandemic was overblown.

He said this week that putting on a concert while respecting health guidelines involved negotiating with officials and reprogramming the theatre’s ticketing software in less than three days. Barriers were erected to funnel the audience into the theatre without crowding. Signs were put up to direct the flow of foot traffic and explain anti-contagion measures. Hand sanitisers were placed at strategic locations. “It’s easier to close a theatre than to reopen one,” Laufenberg said.

If you want to tell the story of Romeo and Juliet, they aren’t going to be able to follow social distancing rules. I can’t imagine that. I don’t want to imagine it

During the interval, wine, pretzels and other refreshments were served outdoors from a food cart near the colonnaded theatre entrance, instead of in a foyer, like normal. Luckily the weather was clear and warm. “It’s not the atmosphere we’re used to,” Wolfgang Allin, an Austrian architect who has a home in Wiesbaden, said shortly after he and his wife, Angelika, took their seats in the balcony. “But you have to take it as it comes.”

The idea for Monday’s performance grew out of discussions between Laufenberg and Groissböck, who worked together last year on a staging of Richard Wagner’s Parsifal at the Bayreuth Festival, in Germany (which has cancelled this year’s productions).

Groissböck was at his home in Switzerland, he said, trying to stave off depression. “We get along well,” he said of Laufenberg, “and we share the same rebellious attitude” toward the restrictions. The baritone chose the title of the concert, My Spirit Thirsts for Action, My Lungs for Freedom, a line from Schiller. He said it expressed his frustration with the lockdown. Groissböck and Alexandra Goloubitskaia, the pianist who accompanied him, accepted drastically lower fees than usual. “Money is the last priority at the moment,” he said, adding: “I’m overjoyed this is even happening.”

For an encore, Groissböck sang an excerpt from a role he was scheduled to perform at Bayreuth if the pandemic had not interfered: Wotan’s Farewell, from the end of Wagner’s Die Walküre.” The audience was ecstatic, making up in volume what it lacked in numbers.

But Laufenberg said that performances like this were not a permanent solution, either financially or artistically. “If you want to tell the story of Romeo and Juliet, they aren’t going to be able to follow social distancing rules,” he said. “I can’t imagine that. I don’t want to imagine it.” – New York Times