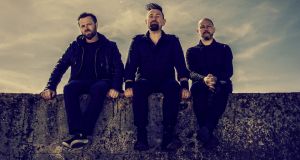 Therapy? The band picked their biggest hits from the 1990s and booked studio time in Abbey Road.

There comes a time in every rock band’s career when they must “arise and go now and do the Abbey Road thing”. It’s one of the Seven Stages of Rock’n’Roll, along with the “tax exile” phase, the “experimental jazz-electro” phase and the “descent into drug-addled hell” phase. Inevitably, the band will find themselves traversing the iconic zebra crossing and entering the legendary London studios to make a record. It’s just gotta be done.

Not even punk-pop-metal bands from Northern Ireland can resist the magnetic pull of Abbey Road; although, to be fair to Therapy? they’re already familiar with the place, having mastered some of their hit records there, and dropped by over the years to add some overdubs.

But when the Larne trio were planning their 30th anniversary celebration, they wanted to give the fans something special to thank them for their years of devotion to the Church of Noise. And what better way than to re-record their best-loved songs in the hallowed space where The Beatles created Sgt Pepper, Pink Floyd made The Dark Side of the Moon and Cliff Richard recorded Summer Holiday?

“We didn’t want to do a greatest hits album because about six years ago Universal put out a singles collection,” explains the band’s singer and guitarist Andy Cairns. “So we thought, what about a live album? But we didn’t want to put on any old gig – it would have to be a special gig, somewhere in Ireland, and we didn’t have time to do that. So then our producer, Chris Sheldon, said ‘why don’t we go into Abbey Road and record?’”

So the band picked their biggest hits from the 1990s (no shortage there – Therapy? has had about a dozen UK top 20 hits), booked studio time in Abbey Road, and “laid down the tracks” in just a single day. That knocks Led Zeppelin into a cocked hat – they took a glacial 36 hours to make their debut album.

I didn’t get into this to be a pop star or an actor, or to end up playing golf with Elton John.

The band – Cairns, bassist Michael McKeegan and drummer Neil Cooper (who joined the band in 2002, following stints by Fife Ewing and Graham Hopkins) – went in at 11am, and finished at 10.15 that night, which meant Cairns was able to get back home to Cambridge in time for bed (Therapy? are clearly long past the “my drug hell” stage, if they ever even went there).

It was a productive day’s work: 12 of their best-known tunes given a turbo-charged freshening-up, including the drilling guitar riffs of Teethgrinder, the choppy power-chords of Screamager, and the flailing hammer-ons of Nowhere. The songs showcase the band’s uncanny ability to bury an earworm beneath churning metal riffs and earthshaking bass and drums; by the time your ears stop bleeding, the tune’s already embedded itself into your head.

Over the past 30 years, Therapy? have matured from snotty punk-metallers to middle-aged snotty punk-metallers, but they were keen not to lose some of the youthful immediacy of their 1990s hits. They were also conscious before going in to re-record them that, just like motorists, they may have fallen into bad habits on the road.

“We’ve been playing these tracks live for years, and some of them we play every single night and some we don’t play very often, so we decided to revisit the tracks and see where we’ve gotten lazy or where we’re playing it the wrong way.

“We think some of them sound better now than on the original recorded version. The album’s got a lot of life and brio.

“We’re obviously a lot better players – we’ve toured constantly as a band, we’ve learned a lot of things from playing with other musicians and working with different producers. We’ve picked up a lot of things. But there were certain things in the original tracks that were a sign of our naivety, but which worked, so we didn’t try to change that.”

Fans are sure to notice a big change to one track, though: their version of Husker Du’s Diane, a top 30 hit for Therapy? in 1995. No cello. Hello?

“The reason we did it with electric guitar was as a tribute to Husker Du’s Grant Hart, who died a couple of years ago. We had been chatting to him about doing an acoustic tour together, but that never happened.”

And sharp-eared fans will also discern the voice and guitar of one James Dean Bradfield from Manic Street Preachers on Die Laughing. According to Cairns, Bradfield latched on to that song when he first heard Therapy’s breakthrough album Troublegum in Cairns’s hotel room back in 1994.

“We did a festival in Portugal last year, and the Manics were on the same bill, and it was great to see them. I just rang him later and said, d’you want to come in and do Die Laughing, cos I know that’s your favourite Therapy? song. And he said yes.

“We feel a lot of kinship with the Manics, we’ve both been around a long time.”

With just one day to record 12 songs, there was no time to go down the rabbit-hole of Abbey Road’s wondrous history.

“We were in Studio Three, where parts of the White Album were recorded. It’s one of my favourite albums, and I knew Julia had been recorded in Studio Three. But I made sure to get all the fan-boy stuff out of the way before we started recording.”

Greatest Hits (2020 Versions) represents a potted, power chord-packed history of a band that rode the 1990s wave of pop chart glory, along with fellow northern Ireland acts Ash and Neil Hannon aka The Divine Comedy. While Cairns is thankful for the brief time Therapy? bothered the mainstream, he’s not looking to recreate past glories. The band is still working, still touring, and still releasing gloriously noisy albums including 2015’s Disquiet and 2018’s Cleave.

“I’ll be 55 this year. I didn’t think the band would still be going at this stage. But I’m glad to be still making music. I didn’t get into this to be a pop star or an actor, or to end up playing golf with Elton John. The reason why I got into this was because I’m a musician, and I’d like to be a musician for as long as I possibly can. So to be still making records three decades later is fantastic.

“We’re very vigorous listeners. A lot of people we know who have stayed in the business have a love of music. I hate to say this, but we know a few musicians who don’t actually enjoy what they’re doing. They get together every three years to tour, and they won’t like any music made after 1996. And I think, well, what’s the point – just go and do something else. We buy new records and we go to see bands, we tell each other about acts we like, and that keeps us really into it.

“It makes for awkward dinner conversations sometimes. I have a friend who’s in finance, and he can’t understand why a grown man is listening to a band called Rainbow Grave and writing edgy, angst-ridden guitar music. The way I look at it, it’s a way of avoiding midlife crisis, and it means I don’t get hung up on a lot of the things other people get hung up on.”

Greatest Hits (2020) Versions is out now on Marshall Records. Therapy? play the Olympia, Dublin on September 25th and the Limelight, Belfast on September 26th