After a decade, renowned producer, DJ and musician Theo Parrish has got the band back together – and what a band 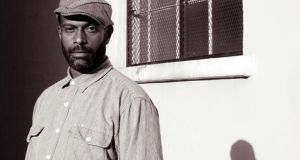 How did the live band come together? Piece by piece, with unexplainable timing and luck. I started by approaching the talent around me – Duminie Deporres for guitar, who, I believe, is the second coming of Eddie Hazel, and in recording for Wildheart, I met Mr Mensah, who basically wrote the second half of It’s Just Begun – he is probably the most musically advanced individual I’ve ever met. I had worked with Amp in Nigeria for Tony Allen – everybody knows he’s bad, and I knew that these three were exemplary musicians to build around.

The rhythm section comes from Myele Manzanza who surprised me earlier this year with a cover he did of one of my tunes I licensed from him for Wildheart. It was amazing – his ability to mimic any pattern is otherworldly. And as for vocals, I found Ideeyah through Duminie,whilst looking for a vocalist for my LP. I asked her to join as soon as I heard her. Since it seems that there’s starting to be a lack of dance in dance music, I thought I’d try to remedy that by example – Gehrik Mohr and his crew of phenomenal dancers, Jade, Maile, and Dominique will be displaying how to get down to the get down. It was work deciding what songs to cover, since it’s been quite a journey through the years, improving the sound and the release cycle – I reduced the list by thinking of a range of the titles that could be pulled off in a live context, with a variety of textures.

Composer Philip Glass has been quite vocal in his concern about the US government’s cuts to music education in school – he talked of how a music education or access to music can be vital, because it is a great foundation. What are your thoughts? I’d agree. Sometimes parents are challenged because they know if only their child could be exposed to something creative, it could give them a sense of innate accomplishment, or earned accomplishment,which in turn becomes confidence. That confidence becomes critical in the US when you have to operate on the other side of the socio- economic/cultural barrier. That can sometimes mean the difference between seeing life as something that happens to you, or something you live.

Was your time at the Chicago Academy of the Arts, and the Kansas City Art Institute influential to your subsequent work? Those arts schools gave me confidence, if nothing else. They taught me that no one can teach you to be an artist, per se, but they can teach you the nature of dedication required to gain skill. In the acquisition of those skills you find out if you have the desire to express yourself.

Though you are originally from Chicago, Detroit is home for you.There is a wave of people from a younger generation moving there. Do you sense a period of renewal? Not quite citywide.There’s a lot of activity downtown and a lot of money being pumped in, but north of Grand Boulevard, West of Trumbull, where the residential areas sort of begin, there’s little or no evidence, except property sales, but not much economic development. I think that will change, though the bigger question is whether Detroit will retain its cultural value through that process.

You are a real collector of sounds and records – some of the younger generation regard culture as transient, not to be held and reflected upon, not to be kept close as precious material. In this context, libraries are increasingly important, as is the role of archive, as it suggests that culture,and people’s life’s work, matters. I agree. It seems the largest by-product of accelerated consumerism is the simplification of information. To justify this reduction of raw information in its cumbersome, delicate, and specialised forms such as books, vinyl, and most art forms – there tends to be a devaluing of the creative processes. To do this people are encouraged to view culture as “romantic” or worse, culture gets mocked for its ability to engage emotions. It’s uncool to feel these days. It’s as if feeling something,or being passionate, or believing in something, is diametrically opposed to branding, which actually cheapens the output. The only way to balance these phenomena is to encourage dedication in creative people, and add value to the output that clearly touches people, and get used to paying a premium for that. This will divide stuff used as a lifestyle vehicle, from refined creative output – aka art – made to remind us of our humanity.

This reaches back again to the importance of community, which infuses your work: the idea of it, and the practice. Yes. This music has come from the community of the Midwestern cities of the great lakes, it spawned the musical movements we know of called “House” and “Techno”. These movements went worldwide, got reinterpreted and spawned new movements as more people were touched by it and it reverberated back and forth until it has become recognisable everywhere in the world. What has not been lost is where it started and who started it, even if those originators aren’t the ones to benefit from it the most financially. What is being lost, without a doubt, is why it was being made. The way to correct that is to make it personal – celebrate community, champion the culture.

Theo Parrish: Teddy’s Get Down (Live Show) is at the Sugar Club, Dublin, on Thursday July 17th

How to be Nowhere: sharp, lyrical take on Central American violence
10