The RTÉ National Symphony Orchestra is failing to engage with modern music, and this needs to change 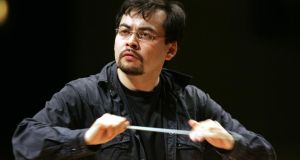 Oftentimes the things that matter most are not the ones that are talked about the most. Think of practices in the medical profession that can cause patient care to get sidelined in a maze of professional and moral concerns. Or of the political classes currently preaching austerity around Europe in the face of the dreadful human outcomes currently being produced. Or of any number of situations where you get lip-service instead of service, or where custom and practice effectively take precedence over everything else.

RTÉ has had the National Symphony Orchestra (NSO) for more than six decades, during which time it has been the only locally-based provider of concerts covering the broad symphonic repertoire. The Ulster Orchestra in Belfast is limited by numbers (the larger, late romantic works are mostly beyond its means); the RTÉ Concert Orchestra and Irish Chamber Orchestra are smaller again. RTÉ’s radio broadcasts of the NSO’s concerts give it the largest regular audience of any arts institution in the state, although the Ulster Orchestra’s broadcasts have an even larger audience through the BBC.

Music is an international and multi-ethnic affair. The orchestra’s current principal conductors are from Kazakhstan and Finland. The last native English speaker to hold such a post was Scotsman George Hurst, who resigned as a protest over management handling of the orchestra in 1991. Fifteen nationalities are represented in its ranks and its repertoire is representative of the broad sweep of the Western musical tradition.

Yet, whatever way you look at it, the NSO is a most unusual institution. Uniquely for a country of its population in Europe, Ireland has only a single orchestra of the size of the NSO. There are smaller countries that have more – a national or city orchestra in the capital, an opera and ballet orchestra, and a separate broadcasting orchestra. Successive Irish governments and arts councils have shown scant interest in the fact that musical infrastructure in Ireland is so underdeveloped by comparison with the European norm.

This has created problems over the years for the NSO. Broadcasters that have the benefit of licence-fee support typically devote a lot of time to areas of the repertoire that are not commercially attractive. In any European country you care to name, you’ll find the lion’s share of the programming of new orchestral music is borne by radio orchestras.

The NSO’s management has long farmed the programming of its annual Horizons series out of house. RTÉ gives the programming of these concerts over to Irish composers. All that the orchestra has to do is choose those composers and negotiate with them. RTÉ’s inexperience in the area of new music was frighteningly shown up in the New Music Dublin Festival in March, where the headline opening concert by the RTÉ NSO regrettably, if predictably, attracted a derisory audience.

The station has also abandoned the idea of making direct artistic choices about who it will award commissions to. Its commissioning fund is now accessed by application, and the applications are assessed by RTÉ management in conjunction with outside experts (for the 2012 round, these experts were the composers Nicola LeFanu and Philip Hammond).

The logic of this is absolutely astonishing. Irish composers at the peak of their careers can no longer expect a commission from RTÉ unless they choose to apply and enter a competitive process. Commissioning is an artistic decision, just like hiring conductors and soloists, or putting together a programme. Why not make all of those competitive, too? Turning commissions into a matter of formal competition is nothing less than an abdication of responsibility.

Given its situation, the NSO is obviously the only hope for Irish composers of large-scale symphonic music, with the main opportunities coming through the Horizons concerts (the focus next year will be on Rhona Clarke, Marian Ingoldsby, Brian Irvine and Seán Clancy), and commissions for the subscription concerts (next year Ed Bennett). Apart from the Bennett, just a single work by a living composer (John Adams’s The Chairman Dances ) has made it into the subscription season. It’s not that new music is totally absent (non-subscription offerings include Raymond Deane’s The Alma Fetish and Harrison Birtwistle’s Earth Dances ), but the pattern is one of the ongoing ghettoising of new music.

It’s an old, old pattern. When you cast away things either through fear or neglect, you may come to fear them or neglect them even more. The adaptation of RTÉ’s programming to the opening of the National Concert Hall more than 30 years ago set up negative patterns for new music that have never been remedied. Things were much better for new music in the 1960s and 1970s. And back in 1947 – the information is in the Radio Éireann annual report – the orchestra performed around 20 works by Irish composers, and was perspicacious enough to include Richard Strauss’s Oboe Concerto (1945), Honegger’s Symphony No 2 (1941), as well as works by Messiaen and other living composers. In what other area of cultural life, apart from opera, have things gone so far backwards from the late 1940s?

Of course, the orchestra plays to a much higher standard now than then. And it plays in a much better hall. But the failure to engage meaningfully with the music of our own time is a major black mark on the its work. And even more serious is the failure to sift the new Irish work it does actually play, and decide which pieces are worth a second hearing.

Virtually all of the NSO’s advocacy of Irish music is a once-only affair. Indeed, there’s just one composer who stands as a shining exception to this, Shaun Davey, who gets programmes all to himself, year after year.


A taste of things to come
The RTÉ NSO’s season, down to 24 concerts from the average of 30 over the past 10 years, will be launched at a free lunchtime concert today, with principal conductor Alan Buribayev conducting a “taster” programme, guaranteed free of music by the living. (The concert is at 1.05pm in the NCH.)