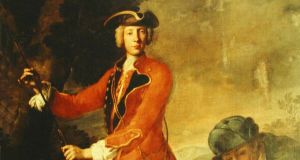 The 18th century gentleman’s education wasn’t complete without the obligatory Grand Tour of the European mainland. Normally undertaken at the age of 21, it was considered an essential rite of passage in their intellectual and cultural development. Generally those from Great Britain or Ireland journeyed through France and Italy in order to familiarise themselves with the roots of classical western civilisation. They would leverage their aristocratic connections and spend months or even years studying Roman architecture and Renaissance artworks in their original settings.

The young Dublin-born Charles Hamilton, son of the Earl of Abercorn, would embark on his own tour in 1725 after earning a BA from Oxford University. He spend time with some of his distant relatives in Lorraine before making his way to the Italian peninsula where he would reside for nearly two years. His time in Italy seems to have left a profound impact on him and his love for sculpture and art, that he developed there, would remain with him throughout his life. At the time there was a thriving trade in antiquities in Rome and many resident artists, sculptors and dealers made small fortunes off of the need of the young tourists to demonstrate their sophistication and worldliness by acquiring an aesthetically pleasing piece of history to take back with them. Many however, were merely elaborate forgeries or reproductions and prospective buyers needed to be cautious. Hamilton was no different. His trophy piece was a statue of Bacchus, the Roman god of agriculture, wine and fertility reputedly acquired from a noble Roman family then short of funds. In an attempt to halt the removal of valuable cultural artefacts from their country of origin the Papacy had issued a number of edicts prohibiting the trade but they were often openly flouted.

Eventually Hamilton was compelled to leave the mainland and made his way back to Great Britain. He soon became MP for Strabane in the Irish parliament, a position he would hold until 1760, though he would never attend a single sitting, preferring to remain in England. Within a short period of returning he was married and father two daughters. For an aspiring young man of an aristocratic background it was essential to make yourself known at court and to those who could exercise political patronage. Hamilton would attend on Fredrick, the Prince of Wales, but he found court life dull. Following the death of his wife he returned to Rome for a second time in 1732. His art collection continued to grow and he was so at home in Italy that he proclaimed he “would be happy to spend the rest of his life there”. It was not to be, and he returned once more to Great Britain and aligned himself politically with the Patriot Party, a faction within the governing Whig Party opposed to the policies of the prime minister Robert Walpole.

Opposing a dominant ideology is difficult and resistance can manifest itself in many ways. Though perhaps difficult to imagine today landscape gardening was considered a subversive act in the 18th century. Follies erected in defence of the ideal of liberty within the pleasure gardens of the aristocracy might be considered ironic by modern standards but during their heyday to construct one trumpeted your belief in a freedom far from universally enjoyed. The more naturalistic style of the English garden, which favoured the winding pathway and the secluded clearing, was at odds with the more rigid and ordered formal gardens of France or the Habsburg domains and it was believed that it would help to cultivate dampen any autocratic tendencies among its visitors.

Hamilton would ascribe to this manifesto and aligned himself with those of a similar mind-set. From 1737 onwards he began to acquire lands in Surrey that would become the Painshill estate and develop what would be his most important legacy. He was inspired by and would in turn inspire some of the most notable landscape gardeners of his day, and would come to be recognised as a man of taste and a master designer within the tradition. His gardens boasted a vineyard, an evergreen amphitheatre, a gothic temple, a Turkish pavilion and a temple to house his beloved Bacchus statue. A circuitous route encircled the serpentine lake. and the estate boasted an orangery and trees sourced from around the world offered a range of perspectives. Hamilton became known as a master of illusion. His gardens attracted visitors from across the country and were widely praised. However, his magnum opus came at a great financial cost and eventually his debts caught up with him and he was forced to sell Painshill in 1773.

Today the gardens that were shaped under the watchful of this genteel émigré Irishman are open to the public and somewhat ironically given Hamilton’s fractious relationship with the present incumbent’s distant predecessor are under the patronage of the Prince of Wales.