The devil in the detail of RTÉ’s orchestral cutbacks 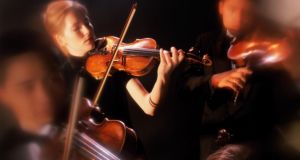 A couple of years ago I had my ear bent by music lovers who were so upset about the severity of orchestral cutbacks in RTÉ that they seemed to be scenting a doomsday scenario. In July 2013, then minister for communications Pat Rabbitte announced that the Government would ask its New Economy and Recovery Authority (New Era) to identify further cost cuts in RTÉ.

Rabbitte specified that the New Era report would include “an examination of achievable efficiencies” in RTÉ’s music groups, which comprise the RTÉ National Symphony Orchestra, the RTÉ Concert Orchestra, the RTÉ Quartet, the RTÉ Philharmonic Choir and the children’s choir, RTÉ Cór na nÓg. This, it was suggested to me, would surely exacerbate an already damaging process.

The orchestras are still here, of course, trimmer than they used to be and less well remunerated. The consultants’ report was published in April , and is available The version availableon the Department of Communications website, albeit in heavily redacted form. There is blacked-out text and data on 69 of its 192 pages. Given the current coalition’s declarations about transparency, it’s amazing that these redactions even extend to withholding the number of players in the two RTÉ orchestras.

The headline conclusions on the RTÉ music groups are worth highlighting. There are three. Firstly, “the net cost of public service per performance declined 27 per cent between 2008 and 2012 from €81,000 to €59,000”. Secondly, “the majority of costs are staff costs and it is not an area where efficiency gains can be easily achieved”. And finally, “costs are in line with benchmarking analysis undertaken”.

The choices for the bulk of the benchmarking analysis are fascinating. Comparisons were made in Australia and New Zealand, through the Pit Services Scoping Study prepared by the Anzarts Institute for the Australian, New South Wales and Victorian governments; and the New Zealand Professional Orchestra Sector Review commissioned by the country’s minister for arts. (None of these reports contain redactions.)

The pit services study is an investigation into the provision of pit orchestras for opera and ballet performances in Sydney and Melbourne. Neither of the RTÉ orchestras has ever been primarily a pit orchestra, although the RTÉ NSO did at one time play in the pit for the Dublin Grand Opera Society and Wexford Festival Opera, and the RTÉ Concert Orchestra serviced the opera seasons of Opera Ireland until its demise in 2010. The work patterns of orchestras that exist to serve opera and ballet companies and orchestras whose work is built around concerts are radically different.

In Ireland, there are just the two orchestras in RTÉ; the 22-member Irish Chamber Orchestra in Limerick; and, in terms of a pit band, the Wexford Festival Orchestra.

Issues of national provision don’t seem to have impacted on the NewERA report, not even the fact that a slashing of the RTÉ NSO’s touring activity was an important factor in the achieved cost savings.

No one I know with a serious interest in music is happy about musical cutbacks in RTÉ, the loss of employment, the narrowing of repertoire, the falling off in the commissioning of new works by Irish composers, and the failure to make key appointments in reasonable time. But history tells us that the reality of musical culls and cutback has often actually been far worse than this.

Once upon a time, all film and television scores were taped by orchestras and groups of instrumentalists in recording studios. But for decades now, digital technology has opened up the world of orchestral-sounding scores to anyone with equipment you can have on a desk at home.

It’s not the first time that such a monumental shift has taken place. A century ago, if you wanted background music in a restaurant or hotel lobby, you had to have live musicians to provide it. And before the advent of the talkies in the late 1920s, every cinema had to have its own pianist, organist or small orchestra. The composers Virgil Thomson (in the US) and Dmitri Shostakovich (in Soviet Russia) both played in cinemas in their youth.

Music and musicians survived all these setbacks, and, as with the Yellowstone National Park fires in the US in the 1980s, recovery was sometimes quicker than expected.

The cuts in RTÉ are the new reality. The question is how long that unpleasant new reality will have to be endured before new approaches and solutions are found to undo the damage that’s been done.

The charms of Boccherini’s Sonata in C for two cellos (Sarah McMahon and Aoife Nic Athlaoich) were rather dissipated by the woolly acoustic, something that certainly didn’t happen to mezzo soprano Rachel Kelly in Dvorak’s Biblical Songs. Here the vocal presence was always firm, although the consistency of this impressive young singer’s fervour did seem too much for the sometimes slender material.