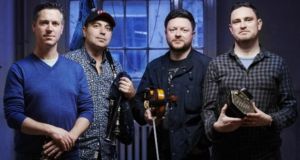 The Galician and Irish traditions will coalesce on this opening night of an extensive Music Network tour. Lorenzo is a highly acclaimed gaita (Galician pipes) and whistles player, and he will join a trio of garlanded Irish musicians. Jim Murray is an inventive guitarist who has accompanied everyone from Sharon Shannon to Seamus Begley.

Dónal O’Connor is a fiddle player, producer and TV presenter whose collaborations include working with Olllam, Lúnasa and many others, while Jack Talty is a Clare concertina player, producer and founder of Raelach Records. Together, punters can expect this quartet to bristle with energy and bubble with a high octane appetite for adventure.

Given the rise in right wing and anti migrant sentiment this January Clé Club will start the new year with a night of music and songs of protest against racism and xenophobia. The Clé Clubbers are adamant that as a people who for long relied on the kindness of strangers the Irish will have no truck with those who preach hate against migrants or asylum seekers.

In the spirit of Pete Seeger, Christy Moore, Woody Guthrie, Ewan MacColl and Peggy Seeger the Clé club welcomes 2020 with a positive message of inclusion and hope.

Joanie Madden’s iconic ensemble celebrate their 35th anniversary, with Madden at the helm, along with Nollaig Casey on fiddle, Mary Coogan on guitar, Kate Purcell on vocals and guitar, step dancer, David Geaney and Seámus O’Flatharta on vocals, harp and step dance. Cherish The Ladies will doubtless flourish in an intimate setting such as this.