The best traditional music gigs in Ireland this week 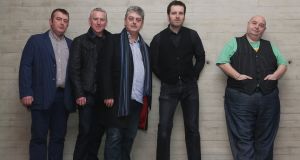 Four Men and A Dog with the Imbolc Orchestra and Michael Rooney
The Guildhall, Derry
Ever since they burst on to the scene way back in 1990, this band of reprobates have breathed so much life and mischief into a sound that’s all theirs, and theirs alone, that it’s fitting that they should celebrate their 30th birthday in the company of an orchestra of sixty of Irish and Scottish classical and traditional musicians, with orchestral arrangements by Michael Rooney. Irish traditional, bluegrass, Americana and so much more besides: these boys know how to mix it up.

A Woman’s Heart Orchestrated
National Concert Hall, Dublin
It’s one of the most successful Irish albums of all time, selling more than 750,000 copies in Ireland alone. Now, for the first time ever, the RTÉ Concert Orchestra presents A Woman’s Heart Orchestrated. Tonight’s performance will feature the woman who penned that memorable title song, Eleanor McEvoy along with Maura O’Connell and Wallis Bird, and the trio will perform this entire iconic album live.

Séamus Begley, Méabh Ní Bheaglaoich and Matt Griffin
Ionad Cultúrtha, Ballyvourney, Co Cork
West Kerry wends its way to the Cork Gaeltacht for this performance by accordion player, singer and teller of the tallest of tall tales, Seamus Begley, who will be accompanied by his daughter, box player and singer, Méabh and multi-instrumentalist, Matt Griffin. Seamus’s recent performance at Temple Bar Tradfest was a timely reminder of the breadth of his tunebook and the fragility of many of his songs.

Andy Irvine
The Hot Spot Music Club, Greystones, Co Wicklow
The indefatigable Irvine brings his vast songbook and tune repertoire to this club scene, where it’s likely that everything from his cap doffing to Woody Guthrie, All you Fascists bound to lose to his genteel ode to the west coast of Clare and his intricate Balkan melodies will find full purchase. Irvine’s real home is on the road, where his music is the horse power that propels him on to the next night, the next rapt audience.

Mica Paris: ‘Bankruptcy just means you made too much money’
6