The best rock and pop gigs: From The Hu to The Pale

Mongolians bring mix of the bombastic and the bizarre, while Dublin band turns 20 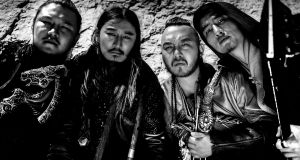 The Hu
Limelight 2, Belfast; also Sunday 16, Academy, Dublin
There’s always a first, isn’t there? We reckon Mongolia’s The Hu have a better claim to most, however, as they are surely the only metal/rock band that blend bombastic bass and deafening drums with traditional instruments (morin khuur, tovshuur, tumur khuur – respectively, horseshoe fiddle, guitar, and jaw harp) and Mongolian throat singing. They are visiting Ireland in support of their debut album, The Gereg. Expect something very different and very interesting. The Dublin show is sold out. TCL

Spies
Whelan’s, Dublin
After 10 years of making music together, Dublin band Spies will play their last ever show as a group in Whelan’s. Michael, Conor, Neil, Jeff and Hugh made the announcement in January, letting fans know that they’re all still great friends and they’re incredibly proud of their music. Living in different countries and with life doing that thing it does best – getting in the way of things – this will be their last gig. So join them in Whelan’s and turn this goodbye into a celebration. LB

Selky
Hang Dai, Dublin
As one of the founding members of Club Comfort, Selky (with his fellow comrades and resident DJs Baliboc and Roo Honeychild) is responsible with providing gig goers across Ireland with some of the best dances in recent years. Selky goes against the grain of techno, working R&B and hip-hop influences into the set but also slips in the element of surprise. Hang Dai kicks off at 11pm and goes from dinner to dancing, so grub up and then get down. LB

Baliboc & Kate Butler
Electric, Galway
While Club Comfort’s Selky is flying the flag in Hang Dai, Baliboc is joining Gash Collective Kate Butler for a knees-up in Galway. Together the Dublin blow-ins have played in Jigsaw, and separately they’ve achieved stupendous things, like Baliboc’s historic five-hour set from last summer and Butler production role with Dublin Digital Radio’s Atomic Radio, a show for young people in music. Expect a mix of jungle, footwork, UK hardcore and hard drum from Butler and mixes that go hard and dark from Baliboc. LB

Yenkee
Grand Social, Dublin
It’s happening again – the water in Cork has been spiked with equal measures of genius and oddness. Or at least that’s what Yenkee (aka Graham Cooney and friends) appear to be about. Think perfectly skewed lo-fi bedroom pop that may have roots in a previous life as a busker, but which has blossomed into something much more immersive. He is currently plugging his Cannibal Tree EP – on which Would You Rather proves that whistling can be a good thing – Yenkee return to Ireland’s second capital city for their biggest headline gig to date. Go see. TCL

Vinyl & Wine Presents: Sound of Silver
Lost Lane, Dublin
Sound of Silver (2007) is home to monumental LCD Soundsystem songs All My Friends, Someone Great and New York, I Love You But You’re Bringing Me Down. Join Vinyl & Wine, and their esteemed panellists, at an intimate gathering to listen to the album full blast in Lost Lane and then get down to the nitty-gritty of why this album is so damn good. LB

HMLTD
The Soundhouse, Dublin
Is it difficult being touted in 2017 as “the UK’s most thrilling new band” (NME) only to find yourselves playing at a tiny Dublin venue three years later? We can’t answer that, but the least we can do is to point you in the direction of HMLTD, a London-based rock band (or, as NME has described them, “the in-your-face sado-glam, hyper-individualist artpop collective”) that have been creating something of a fuss with their broad sonic collage of Fat White Family, The Damned, Peaches, and Bowie’s Ziggy Stardust era. The band will be playing tracks from their recently released debut album, West of Eden. TCL

Twin Peaks
Whelan’s, Dublin
Ten years and four albums in, this Chicago garage rock band have cornered the market with their brash yet eminently melodic music that tips a hat to the likes of the Replacements, the Stooges, the Beatles and the Beach Boys. Their latest album, Lookout Low (2019), has picked up the best reviews of the band’s career to date, with Exclaim calling it “exemplary in its ability to create tracks that sound as if they’ve been part of the rock’n’roll canon for years”. Your cards have been well and truly marked. TCL

Cavetown
Academy, Dublin; also Friday 21, same venue (this show sold out)
You might say that Cavetown, otherwise known as Robin Skinner – with a father who is director of music at the University of Cambridge and a mother who is a professional baroque flautist – didn’t just lick his talent off the stones. Now in his early 20s, the songwriter (as well as designer and all-round cottage entrepreneur) delivers gentle and graceful lo-fi pop ballads more often than not accompanied by sparse instrumentation. The narrative themes are singer-songwriter signatures (love, loss, life and its many vagaries), but Skinner has a way with tunes that charm and cajole. TCL

Maija Sofia
Róisín Dubh, Galway
With the release of her debut album Bath Time in November, Galway singer-songwriter Maija Sofia has made a lasting impression. Picking up five-star reviews – from The Irish Times and farther afield – and landing a nomination for the RTÉ Choice Prize Album of the year, her folk and post-punk music is written from the heart and hits you right in the jugular. Even though it’s early days in her music career, it’s clear to see that Sofia will fast become a name to remember. LB

Richard Dawson
Whelan’s, Dublin
Not many people have heard of Richard Dawson, a singular folk singer from Newcastle upon Tyne. Yet mention the name to certain people and you will receive exclamations of admiration. In the past five years, Dawson’s profile has increased due to albums such as Nothing Important (2014), Peasant (2017) and this year’s 2020. Musically, it is (arguably) outsider folk underscored by influences as diverse as Qawwali (Sufi devotional rhythms) and Captain Beefheart and is as recognisable and disconcerting as you can imagine. In keeping with Dawson’s increasing profile, the show is sold out. TCL

AVA Dublin x Boiler Room
Jam Park, Dublin
As one of the latest music venues on the scene, the Bodytonic team has been booking in big and inventive events to make its stamp on Jam Park, formerly known as the entirely different Wright Venue. This time they’re summoning the powers of the Boiler Room stage from the AVA electronic music festival in Belfast and bringing it to Dublin with some top-notch acts. On the night, you catch Prosumer, Saoirse, Skatebård, Long Island Sound, Efa O’Neill and Fio Fa. LB

The Pale
Tea Lane Church, Celbridge, Co Kildare; also Saturday 22, same venue;  Sunday 23, Royal Oak Pub (ticket at doors)
A band celebrating their 30th anniversary? Oh, right, go ahead and make us feel old, why don’t ya? Such lasting power, of course, for any music act should be celebrated, and so we’re getting the birthday candles out for The Pale, who are playing these intimate shows in preparation for a couple of UK gigs before the end of this month. Further celebrations will follow, including a more extensive Irish tour before summer kick in, but for now it’s The Pale in front of the whites of your very eyes. (NB: it’s a 1pm show for the Royal Oak Pub gig.) TCL

Seoda Seventh Birthday
Dolan’s, Limerick
When it comes to birthday parties, the good people at Seoda certainly know how to put on a good show of whoops, hollers and yee-haws. This year the indie collective celebrate their seventh year as a going concern, and wouldn’t you know it but the joint will be hopping like a one-legged yoke negotiating a cobbled street full of hot coals. With a line-up that includes PowPig, Post Punk Podge & the Technohippies, and the Mary Wallopers, the party is an eye-opener to the kind of diverse and singular stuff that’s making the Irish music scene so vibrant these past few years. Here’s to the eighth, ninth and tenth. TCL