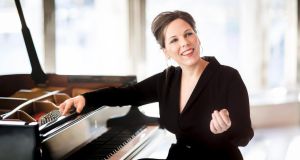 Daria van den Bercken: celebrates the influence of dance music on the piano

The piano has been dancing
Emily Anderson Concert Hall, NUI Galway. 8pm, €18/€20/€6 musicforgalway.ie The Dutch-Russian pianist Daria van den Bercken is an expert self-publicist. She gives concerts in her home, much like David Syme in Castletownbere, and has performed on a platform hanging from a crane as well as on a trailer towed through the street. She’s even done a Ted Talk about what she does. Her Music for Galway concert celebrates the influence of dance music on the piano over the centuries, beginning with Handel, whose keyboard music is a special passion of hers. Also on offer are pieces by Scarlatti, Stravinsky, Debussy, Mozart and Chopin.

It’s as if a breeze from the West Cork Chamber Music Festival has blown across the country to flavour a concert in the Drogheda International Classical Music Series. Russian violinist Alina Ibragimova and French pianist Cédric Tiberghien are both well known to Irish audiences. But their all-French programme mixes the familiar (Franck’s Sonata in A) and the unfamiliar (Ysaÿe’s Poème élégiaque and Vierne’s Violin Sonata, Op. 23) in the kind of way that has become synonymous with Francis Humphrys’s programming in West Cork.

Danish violinist Nikolaj Znaider joins the RTÉ National Symphony Orchestra for the first time for a programme that will feature him as conductor as well as soloist. Znaider has been principal guest conductor of the Mariinsky Orchestra in St Petersburg since 2010, and previously held the same position with the Swedish Orchestra. Stravinsky and Shostakovich are the most famous composers to come out of St Petersburg, and Shostakovich’s Fifth is the symphony to feature in Znaider’s NSO debut. In the first half of the concert he will perform and direct Beethoven’s Violin Concerto.