What better excuse for a symphonic festival than the 150th anniversaries of two Scandinavian composers? 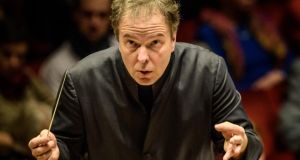 Conductor Sakari Oramo: ‘We [Finns] hate people who can’t understand Sibelius’s music, like most of the German people. We think Sibelius is better than Richard Strauss and Wagner put together’

Where would you expect to find the world’s biggest Sibelius and Nielsen festival, marking the 150th anniversaries of the composers’ births, which both fall this year? In their native Finland and Denmark perhaps? Wrong. The festival took place in Stockholm, although the 12 concerts did feature orchestras from Finland and Denmark as well as Sweden, which provided no less than seven of the 10 involved.

The venue was the Stockholm Concert Hall, a distinctive, blue-coloured neoclassical building in the heart of the city, designed by its architect, Ivar Tengbom, to reference an Athenian temple. It opened in 1926 as the home of what is now the Royal Stockholm Philharmonic Orchestra, and it also hosts the Nobel Prize ceremony once a year.

The facade fronts on to the Hötorget market square, which is busy seven days a week, selling fruit, vegetables and flowers on weekdays and turning into a flea market on Sundays. I found myself on a sunny Sunday afternoon having to wend my way into the hall through sun-worshippers and snack-takers who had commandeered the entrance steps. It’s not a scene you could easily imagine at Earlsfort Terrace.

When I spoke to the man in charge of the hall, Stefan Forsberg, I was really talking to two men. Forsberg has a dual role, which gives him control of the orchestra as well, and he obviously enjoys the liberating experience of talking to himself to get what he wants.

“We like festivals,” he told me. “We do a lot of festivals. We have two major contemporary music festivals, one presenting international composers and one for Swedish living composers. We also present festivals around anniversaries, or things that we find interesting.”

Sibelius and Nielsen may not be Swedish, but they both had a relationship with Stockholm. Sibelius conducted the premiere of his Seventh Symphony with the Royal Stockholm Philharmonic Orchestra. And besides, says Forsberg, “We like to splash things, we like to do big things”.

The programme director, Mats Engström, first dreamed up the idea of 12 days of concerts five years ago. Drawing in 10 different orchestras and 10 different conductors certainly counts as big.

The festival, which also included talks, exhibitions and an inch-thick bilingual programme book, was built on an elegantly simple idea:  the two composers’ complete symphonies, beginning at the beginning, each coupled with another symphony to trace influences and connections. No overtures, no concertos, no distractions.

Attendances at the event this month were satisfyingly high. The hall has a capacity of just under 1,800 and the top ticket price was 330 Swedish krona (about €35). Forsberg told me he was particularly pleased at the response to the concerts that coupled Charles Ives’s Second Symphony with Nielsen’s Second (The Four Temperaments), and Vaughan Williams’s Fifth with Sibelius’s Sixth. These are certainly not conjunctions you’re likely to hear anywhere else any time soon.

A ferocious defence of Sibelius

I got to the last two programmes. In the first of these, the Gothenburg Symphony Orchestra performed a pairing of William Walton’s First Symphony and Sibelius’s Seventh under English conductor Alexander Shelley. In the Walton, Shelley concentrated on warmth over nervous energy, and revelled in the sweetness to be wrung from the finale. And there were moments in the Sibelius when it sounded as though he might almost have been re-envisioning sections of this long-spanned symphony through the lens of minimalism.

The closing concert fell to the home orchestra, refined and responsive under principal conductor Sakari Oramo. Speaking as a Finn, he told me: “Sibelius means the world for us all. And we hate people who can’t understand Sibelius’s music, like most of the German people. We don’t approve of their musical taste. We think Sibelius is better than Richard Strauss and Wagner put together. We defend him ferociously and see his greatness also growing out of the central European symphonic tradition. It’s not like he’s someone from outer space.”

It’s not, he adds, what it’s often presented as: music about the Finnish landscape. “What is most important for me in Sibelius’s music is the sense of organic continuity, which is very much to do with the time cycle of nature: the seasons, the growth of a tree, for instance. It’s all nature put into music. There are no people in Sibelius’s music. Mostly. In the early pieces, yes, they tell about people. But, starting from the First Symphony, the person, I think, has been discarded. And of course, there’s also his great concern with musical material as an absolute. “

He came to Nielsen later in life. “I loved the music from day one,” he says. “It’s so fresh, it’s so different, inventive, immediately appealing.”

He got to know some of the shorter pieces first, and the first symphonies he conducted were the Fourth, The Inextinguishable, with its theatrical battle between two timpanists, and the Fifth, in which a single side-drummer is given freedom to improvise and take on the rest of the orchestra. The effect was actually booed in Stockholm in 1924, when Nielsen himself was conducting.

In Stockholm, Oramo conducted Nielsen’s Sixth and final symphony, subtitled Sinfonia semplice, which is about as misleading a title as a symphony has ever had. He preceded it with another symphonic enigma, Shostakovich’s Fifteenth. Both works were written by composers who knew they were close to death, both start with the sound of a glockenspiel and both embrace effects (musical quotations in the case of Shostakovich) that sound as if they’re spliced in from another world.

Oramo and his Swedish players handled both with exquisite poise, unflappable in the face of surreal moments. Lugubrious Wagner and cheeky Rossini came in out of nowhere in the Shostakovich, and individual instruments or small groups seemed to lose the run of themselves in the Nielsen.

It might seem that Oramo was seeking out a new level of integration, drawing outliers towards the centre in an effort to make a smoother whole. But, actually, that’s not quite how it worked out. It was more on the lines of changing the clothes without changing the person. It’s the peculiarities that make these two pieces the strange experiences they are. I couldn’t help thinking that the Elephant Man in a suit, however virtuosic the tailoring, is still going to remain the Elephant Man. Oramo’s musical sleight of hand meant that in spite of the smoothness of the integration, he didn’t actually betray the character of the music, and the idiosyncrasies of both works were still as obvious as ever.

Given the ongoing strength of the symphonic tradition in the Nordic countries, the strangest aspect of the festival was that there was no recent Nordic work connecting back to Sibelius and Nielsen. Perhaps that could be the focus of another festival.