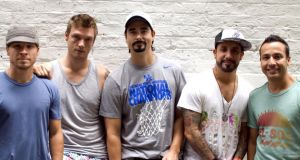 Should we call them Backstreet Men now? It’s been 22 years since a Floridean quintet comprising AJ McLean, Howie Dorough, Nick Carter, Kevin Richardson and Brian Littrell made their bow at SeaWorld Orlando. Since then, the Backstreet Boys have become the biggest boyband in pop history, selling 130 million albums internationally. Their first nine albums cracked the top 10 on the US Billboard 200, making them the only act since Sade to do so. Stan Lee once immortalised them as comic book heroes, the Cyber Crusaders. They have a star on the Hollywood Walk of Fame. And oh my, do they have some great tunes.

Unsurprisingly, Backstreet are back, alright? The older, wiser, sometimes jowlier incarnation of the millennial hit-makers released their first independent album In A World Like This in 2013 and have been touring steadily since, including an Xmas engagement in Washington where they performed for Barack Obama and family.

Last year, they won an MTV Movie Award for their much-admired cameo in the apocalyptic comedy This Is The End. This year, they have a movie to call their very own. Backstreet Boys: Show ‘Em What You’re Made Of, a new documentary, began as a micro-movie, a behind the scenes glimpse into the three week recording of In A World Like This.

“It happened organically,” says AJ McLean. “It was just supposed to document the making of the album until we hooked up with a London based production company called Pulse Films. They really fell in love with the whole Backstreet story. It was their idea to make a true documentary and try to delve into the deep dark secrets and what makes us tick. So we ended up on this amazing journey and a shoot that took almost two years.”

Sure enough, the ‘whole Backstreet story’ makes for a fascinating chronicle. There were teething troubles: despite extensive tours around high-school campuses, the band were huge in Europe before they scored a single hit back home. There have been personnel changes: in 2006, Kevin Richardson left the band to “pursue other interests”. The Boys would venture on as a quartet joining the NKOTBSB Tour with co-headliners New Kids on the Block until Richardson returned to the fold in 2012.

“There are shifting dynamics,” says AJ. “There’s almost a 10-year age gap between Kevin and Brian. That used to matter. But now we’re all older and all married, there’s definitely a new chemistry to the group. We still all fight like brothers. We still laugh like brothers.”

Late-night bowling
The film, says AJ, forced the group to “reconnect” but that process wasn’t always easy. Under the patient gaze of director Stephen Kijak (Scott Walker: 30th Century Man), Show ‘Em What You’re Made Of slowly edges toward the same territory explored in Metallica’s therapeutic squabble-fest Some Kind of Monster. With shades of Spinal Tap, AJ and an old friend try to work out if the vomit he once drank in a late-night bowling alley was his own or someone else’s. There were lots of girls. There were lots of drugs. McLean did three stints in rehab. Nick Carter was forced to quit drugs and alcohol having been diagnosed with cardiomyopathy in his early 20s.

And then there’s natural wear and tear to contend with. As the film opens, we watch AJ struggle through a hillside hike, having blown his knees out years before. Brian Littrell’s ongoing battle against vocal tension dysphonia forms one of the film’s major narrative strands and fans an argument that sees Nick Carter explode into expletives: “Don’t be a fucking d**k like everyone knows you are”. Littrel, a devout born again Christian since the age of eight, responds with calm.

“I feel like, lately, personally, I’ve gravitated more towards Brian,” explains AJ. “I think it has happened because of what he has gone through with his voice. I can relate that to what I go through staying sober. We both have to work at it. It all starts with me. Like me, Brian could easily throw in the towel. But he’s a dedicated and goal-oriented guy. I know he’ll see it through to the end.”

At first glance, they’re an odd couple. The tattooed McLean was always the most rebellious Backstreet Boy.

“I guess it’s just my personality,” he laughs. “Be who you are. Whether that’s clean. Or not clean. I’m kind of a free spirit. We all are in our own way. Some of the guys are a bit more conservative than others. And then you have someone like Kevin who is conservative in some ways and not at all conservative in other ways. I think that’s why we’re a great team. We couldn’t have made it through 22 years otherwise.”

Impresario issues
Back in the day, however, there were six major Backstreet players. The band were initially formed when impresario Lou Pearlman – who also put N’Sync together – placed an ad seeking young vocalists in an Orlando newspaper. In 2006, Pearlman went on the run, having perpetrated one of the largest Ponzi schemes in US history and accumulated $300 million in debts.

“It’s complicated,” says McLean. “Some of us will never come to terms with it. He gave us the opportunities that led us to getting signed to Jive Records. It’s sad. Had he not gone that route he’d still probably be a huge part of our lives. But business and greed got in the way. I don’t think any of us hates him truly. It’s bittersweet. It’s hard to hate someone that brought you into your own. But it’s also really hard to respect someone who lied to you face for who knows how long.”

When did they realise something was amiss?

“We were on super gruelling tour schedules. We were not spending any time with family. And that wasn’t showing up in our bank accounts. Something wasn’t right. Then you’d look at your bank balance. Brian was the one that realised. He fought the lawsuit. He was the one who did his homework and who came to us and said: guys this doesn’t add up.”

These days, the Backstreet Boys have broken away from their old management and record company to affect a fresh start: “It can be hard for us to trust people,” admits McLean, who was Pearlman’s first recruit.

If he could go back in time, what would he advise his younger self?

“Get a really good lawyer! All of us were so young and naive. Kevin was the oldest and he was just 21. When you sign a major record deal you’re not thinking what’s going to go wrong ten years down the road. You’re only thinking that everything’s going right. In so far as you are thinking at all.”

As a neat complement to the new, improved Backstreet Boys, McLean is clean, sober and happily married. In November 2012, he became a father when he and his wife Rochelle welcomed Ava Jaymes, a daughter, into the world.

“She’s my biggest fan,” says dad. “As rewarding as performing is, being a husband and father is the best job I the world.”

How will he feel when those first boyband photos go up on the wall?

Backstreet Boys: Show’ Em What You’re Made Of is in cinemas nationwide Thursday, February 26th, followed by a special performance by the band broadcast live by satellite. backstreetboys.com/international