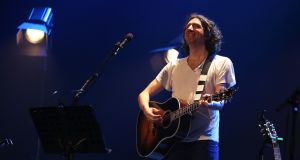 You know a band has hit middle age when they start rummaging around in their back catalogue, hoping to dig out a few nuggets, shine them up and offer them up in a different form for their fanbase. With any luck, they’ll be eagerly greeted not as secondhand news but as brilliant buried treasures.

It’s a scary music industry reality out there, where a hundred million streams is now seen as small beer, so for a band trying to grapple with an altered musical landscape, it’s tempting to go back to the comfort blanket of their biggest hits to keep out the cold winds of change.

Snow Patrol’s new album, Reworked, does what it says on the jpeg: the band have revisited key tunes from their back catalogue and refurbished them, bringing their bedsit anthems closer to lush, loungey soundtracks for the livingroom.

Wednesday night’s Olympia gig was rescheduled from last month, when illness forced the band to cancel, so this is a belated Christmas pressie for patient fans.

But just in case you think this sounds like three rock stars having a buskers’ holiday, as soon as Lightbody opens his big, rich voice on the opening verse of Chocolate, he reminds us why he’s on a different street level altogether. This can’t help but be an intimate experience, and the audience – tentative at first – are soon singing along with the key chants and chorus lines.

“I love this place!” declares Lightbody as he looks into the crowd’s eyes. “This is the only theatre where I’ve fallen off the stage twice.” A few women in the front row hold their arms out in front of them, no doubt hoping it’ll be third time lucky.

I’ve often felt some of Snow Patrol’s songs to be flimsy and fragile, needing some solid bass and pounding drums to keep them from dissipating into the ether, but this acoustic set opens up some nice nuances in such songs as Crack the Shutters and Don’t Give In, and leaves lots of room for Lightbody’s lyrics to breathe.

And, probably most importantly, it allows his hugely engaging personality to come out and embrace the venue in a warm musical bear-hug.

He admits to the crowd that, in the band’s 25-year career, he still can’t remember all his own lyrics. But, with the help of some crib sheets on a music stand, he gets Run and You’re All I Have down almost word-perfect – with some help from the audience, who clearly know all the words. Set the Fire to the Third Bar – originally a duet with Martha Wainwright – and Called Out in the Dark are also highlights.

In the middle of the show, Lightbody’s bandmates leave him alone on stage with his own thoughts of recent bereavement. What follows is an almost unbearably personal song to his recently deceased father, but just when you think it’s about to descend into morbid self-pity, the song suddenly soars into a life-affirming chorus, lifting the audience to its feet in applause.

I Think of Home – conceived as a tribute to Seamus Heaney – sees Lightbody reminisce about childhood trips around Ireland’s caravan parks (“wherever it rained, there you’d find us”). And Heal Me . . . well, let’s say we did get healed. All that was needed now is a rousing version of Chasing Cars followed by Open Your Eyes, and that’s 2020 off to a good start.