RTÉ’s cuts to National Symphony Orchestra are no accident

Dee Forbes wants to give the impression RTÉ is committed to maintaining two orchestras, but it has forced the NSO into a situation of atrophy 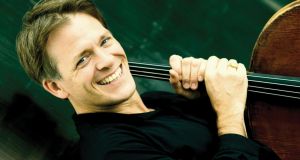 A beautifully reserved account of the Cello Concerto from Alban Gerhardt

It’s time to start figuring out how the circle is going to be squared. RTÉ has issued a five-year strategy document covering the years 2018 to 2022. It’s titled Renewing RTÉ for the next generation and the station’s director-general Dee Forbes has been giving media interviews about RTÉ’s current situation and future prospects.

“2018 is a pivotal year,” she told Laura Slattery in an interview withe The Irish Times. “If there isn’t movement on funding, then there will be severe consequences for us.” The core of her case for turning RTÉ around is based on Governmental reform of licence fee funding. You’ve always got to be worried when your fate is not in your own hands but dependent on external goodwill, particularly if the goodwill has to be strong enough to deliver legislative reform.

Forbes was quizzed about the review of RTÉ’s orchestras commissioned last November and due this month but apparently not delivered yet. The preference, she said, “would be to maintain two orchestras. There is no doubt about that”. But she also said “This is bigger than RTÉ. This is a decision that will have to be taken by the department along with Government.”

That will be a relief to the musicians in RTÉ who late last year were told by managers that RTÉ would have contracted to only one orchestra by as early as next June.

But her assertion still means that if you’re an orchestral employee in RTÉ, or someone engaged with the orchestras through their concerts and broadcasts, you’re doubly dependent on goodwill, the goodwill of the Government and the subsequent goodwill of RTÉ itself.

One of the sections in the RTÉ strategy document is titled “Audiences First”. The three key elements here are given as “Putting the audience first”, “Making high-quality content” and “Allowing audiences to connect with RTÉ content how, where and when they want”.

This obviously ties in with the internal RTÉ announcement in November 2016 that John O’Kane, then the executive director of RTÉ’s performing groups, was moving to the new role of music and arts strategy executive in which he would “explore how, as part of a music and arts strategy, RTÉ can maximise broadcast and digital output from RTÉ Orchestras, Quartet and Choirs and further develop key external partnerships to facilitate greater music content delivery.”

This is all very laudable stuff, especially as the 2018-2022 strategy is to “re-imagine RTÉ as a digital-first public service media organisation fit for the 21st century”.

On the other hand it’s important to judge organisations and the executives that run them not so much by what they say as by what they do. If RTÉ has appointed an executive to “maximise broadcast and digital output” from the RTÉ orchestras, what is it doing presenting the RTÉ Concert Orchestra at the National Concert Hall without the presence of any microphones?

If the RTÉCO’s programme at the National Concert Hall last Thursday – an exciting Irish debut for the young French conductor Quentin Hindley – exists in digital form it can only be because someone made a bootleg recording of it. RTÉ did not broadcast it let alone record it. And this is not the first occurrence of its kind in recent years.

Forbes wants to give the impression that RTÉ is committed to maintaining two orchestras. But yet it has forced the RTÉ National Symphony Orchestra into a situation of atrophy in recent years.

The history of the playing strength of the RTÉ NSO is as follows. At its foundation as the Radio Éireann Symphony Orchestra in 1948 it was 62. In 1958 it became 71. In 1989 RTÉ announced an expansion to what it called the “full international strength” of 93, though the growth stalled permanently at 89. Now, in February 2018, the number of full-time players is just 68. The drop in the Retouch is considerably smaller, from 45 to 40.

The downsizing is no accident and bears an uncanny resemblance to the behaviour of people who damage the roofs of buildings to engender a dereliction that will lead to demolition.

What we have is a situation where the size of the largest orchestra in the State, and also the employment it offers, has been driven down to below the level of the late 1950s.

RTÉ also says that it wishes “to continue its support for chamber music” – its residency is currently fulfilled by the RTÉ Contempo Quartet – and that “negotiations are currently taking place”. The quartet’s arrangement lapses in May, so you can draw your own conclusions about how eager RTÉ is to keep that residency running smoothly.

What was running smoothly last week was the delivery of the two orchestras. The RTÉCO giving sharp and insightful performances of Milhaud, Ibert and Weill under Quentin Hindley. The NSO under Nathalie Stutzmann was in thrilling form in Lalo, Beethoven and Elgar, a beautifully reserved account of the Cello Concerto from Alban Gerhardt.

Totally unrelated, the players of the Irish Baroque Orchestra had fire in their belly at St Ann’s Church, Dawson Street, in their first programme under new artistic director Peter Whelan in an exploration of Dublin’s 18th-century violin virtuosos.

Was the work of a Cork genius deliberately obscured by a famous expert?
Real news has value SUBSCRIBE