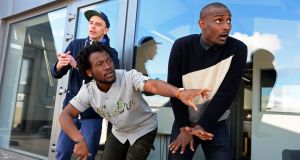 Choice nominees Rusangano Family: could this be the year when they show the prize that hip hop is boss? Photograph: Eric Luke

The RTÉ Choice Music Prize has announced its shortlist for 2016. The prize picks the best Irish album of the previous calendar year.

This year’s shortlist is:

Bantum for Move (Self Released);

Overhead, The Albatross for Learning to Growl (Self-released);

Rusangano Family for Let The Dead Bury The Dead (Self-released);

and We Cut Corners for The Cadences Of Others (Delphi).

The shortlist was made by a panel of 12 judges. An overall winner will be chosen during a live event, which will be held at Vicar Street in Dublin on March 9th. The event will be broadcast live on RTÉ 2FM, and an hour-long special on the programme will be broadcast on RTÉ2 a week late.

This is the 12th year of the prize. The winning act receives €10,000, and the prize is sponsored by the Irish Music Rights Organisation and the Irish Recorded Music Association, with RTÉ on board this year as a media partner. A shortlist for Irish Song of The Year will also be announced on February 1st.

This year’s list is heavy on indie rock and more mainstream than in previous years, with few more alternative outliers. As ever with awards shortlists, there are plenty of good contenders that didn’t make the final 10. There is no nomination for The Gloaming’s well-received second album; they won the Choice in 2014 with their debut. Previous winners Two Door Cinema Club also find themselves excluded, for an admittedly ho-hum record.

Tony McMahon’s Farewell to Music has gone down a storm, particularly in the traditional music world, but didn’t make the cut here. And quite a few quality electronic releases are outside the running, including Luneworks by Mmoths, Take Her Up to Monto by Róisín Murphy, and Cinema’s A Night Train to Budapest. Among the more mainstream acts also excluded are Bell X1 for Arms and Cathy Davey for New Forest.

Despite all of that, there is plenty of quality in the Choice list. And come March 9th, it’s likely to be an indie dust off between All Tvvins and James Vincent Mc Morrow, though the excellent Rusangano Family might finally make it a year when hip hop takes the Choice to school.

Tickets for the live event are now on sale at ticketmaster.ie.