Robert Plant at Bord Gáis Energy Theatre: Everything you need to know

His Dublin show is sold out; here’s what you need to know if you’re going 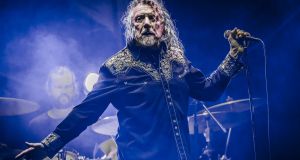 Robert Plant performing at NOS Alive on in 2016 in Lisbon, Portugal. Photograph: by Rob Ball/WireImage

With 11 solo albums under his distressed leather belt, Robert Plant has carved out an ambitious solo career, an unexpectedly fruitful second act that has taken him on an inventive odyssey far removed from the wild Led Zeppelin glory days of his youth.

It would seem that unlike some of his his play-it-safe contemporaries, who are content to rest on their former glories, the older he’s gotten the more curious he has become.

There is a sense of renewed energy and creativity, something that can be traced back to 2007’s pairing with Alison Krauss on the dust-bowl beauty of Raising Sand with its tender, countrified blues which tamed Plant’s iconic, electrifying, cracked howl to a broken-up whisper, sounding like a man still searching for some tangible sense of peace and the comfort of home.

Led Zeppelin may have peppered their sound with a flavour of the East most famously on the booming Kashmir and injected a folky influence on their third full length offering but this willingness to experiment with various styles and sounds has only increased in the singer’s latter years, continuing right through to his latest album Carry Fire, which was released in October of this year.

The album encompasses a diverse range of genres from folk to 50s rockabilly to that familiar Middle Eastern flavour that permeates the title track. Carry Fire is a seamless flow from 2014’s Lullaby and… the Ceaseless Roar where he is again aided by his accomplished backing band the Sensational Space Shifters.

It’s not just lush instrumentation though: there is meat and meaning to the lyrical content with Plant offering up opinions on nationalism on Carving Up the World Again and New World’s decimation of colonialism.

With a heaving, healthy bank balance, Robert Plant obviously does not need to tour again but with the enthusiastic response to his solo work and the urgency and passion that he brings to it, the 69-year-old is back on the road recharged.

Although his live show is mostly made up of his more recent solo offerings there is always the opportunity for him to dip into the vast Led Zeppelin back catalogue.

His lion’s mane of pre-Raphaelite curls are still corkscrewing around his shoulders, that acidic sense of humour is still intact and with his latest album having more than a few lyrical similarities to Led Zeppelin III, don’t be surprised if he throws in a few tracks, which will be warmly greeted like old friends reunited.

Are tickets still available?
In a word, no. Tickets for his Dublin and Belfast shows were snapped up months ago. Who could really expect there to be tickets still available for a Robert Plant gig in a Dublin venue slightly larger than the Sultan of Brunei’s livingroom? But you could keep an eye on socila media to see if any become available.

What time does everything kick off at?
In Belfast and Dublin (Saturday and Sunday), doors open at 7pm. Seth Lakeman will be doing his folky fiddly thing at 7.45pm before Mr Plant and his Sensational Space Shifters take to the stage at 8.45pm.

How do I get there?
The Bord Gáis Energy Theatre does not have a carpark. Grand Canal Square Q
park is situated underneath the theatre. Its entrance is on Chimney View, off Pearse Street. The carpark has 160 spaces, 50 of which can be reserved in advance for an evening show or for a whole day (24hrs). Spaces can be pre-booked up to midnight on the day before a performance. An evening rate of €14 is applicable, from 6pm to midnight when booked in advance, or €12 drive in. A 24 hr rate of €20 is applicable when booked in advance, or €28 drive in. The car park is €3.70 per hour. Call: 01 6111976

There are also car parking spaces in the Convention Centre carpark and the Marker Hotel (which do not offer pre-booking facilities) There is limited on-street parking on Cardiff Lane and Macken Street. Considering this is a fully sold-out show and it is the beginning of the festive season, car parking facilities may be at a minimum so using public transport is advised.

The easiest way to get to the theatre by public transport is the Luas. The closest Luas station is Mayor Square (NCI) on the Red Line, heading east towards The Point. The theatre is a 10 minute walk from the station over the Samuel Beckett Bridge.

By bus, Dublin Bus routes 1, 47, 56a, and 77a all operate close to the theatre. Route 151 operates to the Docklands on the northside which is approximately a 15-minute walk away.

What about security?
As usual, concert goers are encouraged to bring the bare minimum along with them. No ungainly rucksacks or backpacks, A4 purses and bags are ideal but all audience members will go through a routine search before the show so arrive in good time to eliminate any stress and ensure there’s time for some pre-gig chats at the bar.

What are they likely to play?
No Stairway - and definitely no interval. For those who like to time their toilet breaks or hate surprises and need to know exactly what Led Zeppelin songs might be aired, or want to act like they’re psychic in front of their gullible mates, here’s a setlist from his November 28th show at Perth Concert Hall, Scotland: