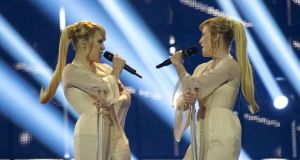 Anastasia and Maria Tolmachevy of the Tolmachevy Sisters from Russia perform on stage during the first semi final of the Eurovision Song Contest in Copenhagen, Denmark. Photograph: Ragnar Singsaas/Getty Images 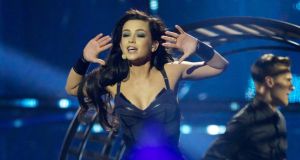 Global tensions found their way into Eurovision Song Contest last night: the announcement that Russia had qualified for Saturday night’s final was met with loud booing.

The 10,000-strong audience in Copenhagen’s Eurovision arena had met the 17-year-old Tolmachevy Twins’ performance of “Shine” with enthusiasm, but expressed apparent disapproval of Russia’s current political moves in their response to voting results.

Top-tipped Armenia, Sweden, Ukraine, Hungary, and Azerbaijan also qualified. The Netherlands’ classy country number Calm After the Storm was considered a borderline qualifier, but made its way through.

San Marino’s first-ever qualification came as a big surprise, but it is not for the singer’s lack of trying: it’s Valentina Monetta’s third time in a row singing for the country.

The announcement of her qualification was met with loud cheers in the arena and the press centre. Other surprise qualifiers were Montenegro, singing the ballad Moj Svijet, and Iceland, with a boppy number about tolerance, No Prejudice.

Iceland’s was the only up-tempo song to make its way to the final, as Portugal’s ‘80s-disco number Quero Ser Tua and Latvia’s singsongy Cake to Bake were both relegated.

The Eurovision final is at 8pm on Saturday.