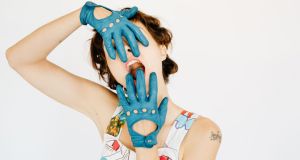 The first thought that flashed through Channy Leaneagh’s mind after she fell off the roof was that she was going to die. The second was that she probably couldn’t afford the ambulance to take her to hospital.

“I was so scared. It takes a lot for me to cry,” recalls Leaneagh, whose art-pop band Poliça this month return with a new album. “I was crying when I called for people to come and pick me up. I knew I wasn’t supposed to move my spine. I was just so terrified of the amount of money I would have to pay for an ambulance.”

It was February 2019 and her home state of Minnesota was in the grip of a biblical winter. Leaneagh had clambered on to the roof of her house in suburban Minneapolis to clear ice dams, frozen rivulets hanging from the eaves that can cause structural damage if allowed to run amok.

She lost her footing and down she went on to the drive-way two storeys below. Leaneagh didn’t know it at the time but she had broken her back. It would take four months before she could comfortably walk again.

“I couldn’t move my legs; the left side of my mouth went numb,” she recalls. “I did say a prayer. I haven’t prayed since I was a little kid. I prayed that if I wasn’t paralysed I would never again go on a ladder.”

Poliça – pronounced “Police-a” – were halfway through writing their fifth album. Leaneagh (39), had been wading through a mid-life malaise, pouring her dissatisfaction into the new songs. It was shaping up to be rather a grim record.

She’s had issues with depression on and off since adolescence. Her sense of isolation from the world was made more acute by the pressure of raising a family, with her husband and band-mate Ryan Olson. And now this: a broken back and further financial strains on the couple, their four year-old son and Leaneagh’s 11 year-old daughter from her first marriage.

“I had not really been in my body for quite some time,” she says. “[After the accident] I really woke up and and came and was like, ‘oh my God, what have I been doing?’”

That journey from darkness into light is the thread running through the new album. When We Stay Alive folds hope into heartache, distils optimism from despair. It’s arty and sometimes inscrutable. It is also searingly honest and empathic. If you’ve ever felt lost, forgotten or ignored, Leaneagh is here to take you by the hand.

“I think anyone can relate to living unconsciously,” she says. “Trying to work hard and do the best you can in life but not really being in your body. I was working a bunch of jobs. Being a mom. Trying to get through life. The fall really woke me up. Before that I had been writing the truth with a heavy dose of tragedy. I wanted to write truth with a heavy dose of positivity.”

Poliça are, by the standards of electronically-tinged alternative pop, a heavy-weight prospect. Their baroque R’n’B has the seal of approval of Kanye West and Bon Iver’s Justin Vernon, with whom Leaneagh has dueted. They’ve toured with New Order and in 2013 played Electric Picnic. They’re a pretty big deal.

Not quite big enough, however, for Leaneagh and Olson to not have to worry about getting by. Prior to the accident, Leaneagh was working as a nursing assistant. In a horrible irony, she had been taking care of people who were paralysed: people who in many cases suffered mishaps similar to hers but were less fortunate.

The additional income the job brought helped; nonetheless at the time of the fall she didn’t have health insurance. Afterwards, friends and music industry colleagues rallied around and raised $20,000 through the crowd-sourcing site GoFundMe to pay for her recuperation. Had they not, she shudders to imagine how she would have come through.

“It so insane,” she says. “For my family it would cost around $1,500 a month for healthcare. That’s more than it costs for us to pay for our home. And of course childcare is about $1,500 a month. It’s just this insane dance.”

Leaneagh goes back to that moment she slipped off the roof and lay on the ground. She called her manager, asking that he pick her up and bring her to hospital. He pointed out that what she needed, and urgently, was an ambulance.

“We had only been without insurance for two months. And even when we were paying and my daughter had to go to the ER for an appendicitis, we still had to pay $9,000. So even though we were paying $1,500 it still doesn’t cover anything.”

It frustrates her to live in a country where artists are not supported and must make their own way. Leaneagh was a backer of Democrat hopeful Bernie Sanders in the last US presidential cycle and Poliça’s music is often political. Their second album, Shulamith, for instance, was named for the late Canadian radical feminist Shulamith Firestone and its original cover image of a naked man and woman embracing was censored by iTunes .

An underdog spirit similarly infused 2016’s United Crushers. The record was preceded by a video for the single Wedding, in which Jim Henson-style puppets reenacted police brutality incidents. Rendering it even more disorientating was the fact that the accompanying song was incredibly catchy.

“I’ve been off and and on anti-depressants since I was young, puberty-time,” she says. “I struggle like so many people trying to figure out how to raise children and to work. Even though it seems like I’m working constantly to support my family it feels very stuck. The world feels very hopeless right now, because we can’t get through to our governments. They are on a different agenda of fattening their pockets. I wish sometimes for a benevolent dictator or some sort of utopian communism.”

As a feminist, Leaneagh of course has thoughts on #MeToo and how women are treated and perceived, both in the music industry and in society. She has never suffered in the explicit way that many others have but she does wonder if we aren’t all guilty of buying into a fortified misogyny, even despite our best intentions.

Leaneagh sounds like heavy company. And yet Poliça’s music has a transgressive thrill. A quicksilver spark ripples through auto-tune splashed early songs such as Lay Your Cards Out, which suggests Kate Bush trapped at the bottom of a slowly flooding mine-shaft (this is absolutely a compliment).

It’s there in the new LP and tracks such as Driving, which recounts her fall and the hallucinatory journey to hospital. “Snow falls on the tip of my tongue,” she sings. “Tasting blood of the violence to come.” It is nightmarishly more-ish.

Besides, if things are difficult for her now they were even more tumultuous at the beginning of Poliça. Leaneagh’s passion for music was kindled when she was eight years-old and Prince, a fellow Minnesotan, gave a free concert for Special Olympics volunteers in the city.

Her own career started when she met her first husband, Alexei Casselle, at the city’s South High School. They formed the folk band Roma di Luna. In 2008 Leaneagh gave birth to their daughter, Pelagia. Twelve months later, their album Then The Morning Came exulted in the wonder of new parenthood.

But the relationship fell apart in 2011. Leaneagh, quietly reeling, sealed herself off and wrote what would become Poliça’s debut album. Give You The Ghost was ritual of exorcism over the course of which she left the marriage behind and put herself back together again.

Soon she and Poliça co-founder Olson were a couple and, now married, they have a son, Schwa (4). It sounds like a story with a happy ending. That’s what Leaneagh tries to tell herself too. Sometimes she almost believes it.

“I’m not a scientist, not a banker,” says Leaneagh. “I was raised, at good public schools, to be a musician and an artist. Those are my skillsets. I have some other things I can do. I can work hard.

“I can be a nursing assistant. I can do other things but nothing that is a good money maker. Our artists, our writers, our teachers, our nursing assistants. We need those people in society. We can’t survive and that leads me and many people to a state of despair.”

When We Stay Alive from Poliça is released on January 31st

The Call of the Wild: Harrison Ford in one of his most engaging performances
3

Zoë Kravitz on High Fidelity: ‘A lot of white men who identified with the book think it’s theirs’
5

Colum McCann on Israel-Palestine: ‘I was completely ignorant of what was going on’
7