Plus new music from The Swedish Railway Orchestra, Son of The Hound, Eoin Glackin, Wallis Bird and Bobby Basil 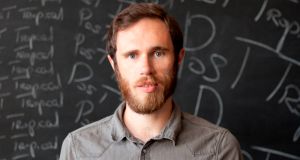 The Swedish Railway Orchestra – Northern Lights
When not DJing the Workman's Club, writing for Hot Press, or making indie music, Rob Smith has another project of an electronic flavour that he's been working on called The Swedish Railway Orchestra. An album is released this week and the lead single is a jaunty electronic number which Smith says is a perfect soundtrack to “Dublin night life in flickering slow motion,” as proven by the video.

August Wells – She Was A Question
The former Rollerskate Skinny musician Ken Griffin formed August Wells with John Rauchenberger in New York a few years ago. A second album Madness is the Mercy is coming next week and the band are leading with this baroque baritone flugel-horn-featured single.

Wallis Bird - Control
Having taken nearly two years to make her fifth album, the Berlin-based Irish singer-songwriter Wallis Bird has revealed a stomping pop song as a follow-up to the slow-burning Change.

Son of The Hound – I.O.U.
Coming on like bar room bluesy-rock, the Omagh singer-songwriter Michael McCullagh's new single has a rough old-school charm to its melodies.

RELEASE OF THE WEEK
James Vincent McMorrow – We Move
The Dublin singer-songwriter moved from folkie to textural pop artist between his first two albums and his third album makes a leap to another new place, informed by McMorrow's love of R&B, soul and vintage pop. Working with a producer for the first time in Nineteen85 (producer of Drake hits Hotline Bling and song of the summer contender OneDance, no less), the songs on We Move have more confidence and drive than on second album Post Tropical. That renewal opens up space for songs like Last Story to sound like a yacht rock track, the R&B soul of One Thousand Times and electronic low-end to flourish on Get Low and Evil. McMorrow's falsetto sounds stronger than ever and lyrically, McMorrow is more direct than ever addressing an eating disorder on I Lie Awake Every Night, his own character on Evil and the relationships to those in his life on Get Low. The album's last song Lost Angeles feels like resolve with the line “don't let fear control you,” repeated as mantra. Onwards.

NEW ARTIST OF THE WEEK
Eoin Glackin
Dublin singer-songwriter Glackin has a cheery folk-pop style as heard on recent EP Club Classic, the four-tracks on the release have a radio-friendly breeziness to them. Glackin previously released two albums in 2011 and 2013 so he's not brand new but what has changed on his new material is a more immediate songwriting style that prompted Ed Sheeran to tweet he was “smashing it”.