New artist of the week: Tank and the Bangas

A playful and exuberant kaleidoscope of spoken word, soul and R&B 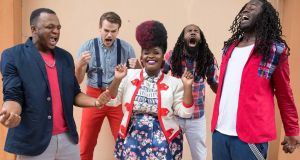 Tank and the Bangas

With live music the only remaining source of reliable income for musicians in these troubling times, the influence of the American public radio company NPR’s Tiny Desk Concerts series, where artists perform stripped-back and cramped sets behind the desks in the radio station staff’s offices has become outsized.

A great live performance on the video series from an emerging artist can make or break a band. So being chosen as the winner of the Tiny Desk Concert Contest of 2017 was no mean feat for New Orleans band Tank and the Bangas, especially when considering 6,000 others also applied.

The band’s subsequent seven-piece performance on the show firmly dragged the band from obscurity to worldwide festival bill rotation. Arriving at a time when a young audience is consuming jazz like never before, the playful and exuberant kaleidoscope of spoken word, soul and R&B is an infectiously uplifting experience, drawing on gospel, funk and rap and schoolyard chants, informed by forebears Jill Scott and Erykah Badu.

With much of the internet consumed by ugly rhetoric, anything that counteracts that, uplifts and prompts crying at desks in work (read the comments) is to be celebrated. The best part? You can see their energy in the flesh next year at The Sugar Club in Dublin on March 2nd. Be quick.Listen here