Plus songs you have to hear from Tirzah and Aretha Franklin 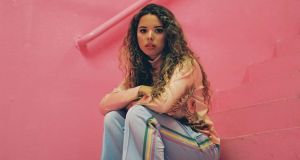 Nilüfer Yanya: From London via Turkey, the Bahamas and Ireland

Who: Electric Picnic-bound soul musician
Where: London
Why: Whatever stock you put in the BBC Sound of 2018 poll these days, it’s worth noting whoever wins the broadcaster’s annual industry-tipping artist award, there are always acts on the longlist who are worth investigating further, regardless of whether they break out in the proceeding year.

Nilüfer Yanya is one such artist. The Londoner is in her early 20s and is in no major rush to the top. Her music may not be one for the top of the charts, and that’s fine by us, as it’s a rich sound she’s cultivating.

With Turkish, Bajan and Irish blood (wahey!), Yanya’s music sits between soul and indie, the former drawn from her undulating voice, the latter from the guitar that often accompanies it. The mix means that the three EPs in Tanya’s discography aren’t too polished but have an intimate quality that draws you in.

On songs like Golden Cage, there’s a laidback R&B feel with the cadence of jazz, while Keep on Calling from 2016 possesses the hushed intimacy of The xx, but with more swing. Yanya’s latest, Baby Luv, is a conflicted song about an ex-lover (yes, that old trope), and the anguish is palpable. The chorus asks “again, again, again, again/ Do you like pain?” repeatedly, before Yanya offers a way back: “You’re still beautiful/ I could watch you comb your hair/ call me sometime.”

The good news for Irish fans is that there are two opportunities to see her in the flesh for yourself this year: at Electric Picnic next week and supporting Interpol in Dublin in November.

Aretha Franklin – I Get High
The Queen of Soul could do polished 80s pop or big gospel numbers but, most of all, she was a singer who had an innate ability to embody a song completely. As a lesser-known example, take this track from the soundtrack to the 1976 movie Sparkle, her 25th studio album, produced by Curtis Mayfield. I Get High is akin to eavesdropping on a cosmic conversation between two forces. Evocative orchestral strings, horns, flute and drums are completely dominated by Aretha, who pulls and pushes the track like a conductor.

Tirzah – Holding On
Tirzah is a London artist who has been knocking around the fringes since 2013. August saw her finally release her debut album Devotion, written and produced in collaboration with long-time friend and collaborator Mica Levi. It’s a brittle and lucid R&B record about love and desire that operates with its own cadence. Holding On sounds like a interpretation of Moby’s Porcelain made with discombobulation in mind.

The Crown: The queen’s nasty side looms into view
2

A dozen things you might not know about Irish names
7