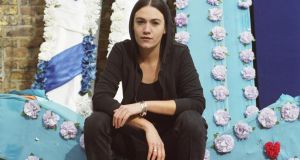 Nadine Shah: ‘You go down to Sunderland, there was an awful lot of that racism, that rhetoric, present’

Nadine Shah once had a boyfriend who was her junior by an entire 12 months. People couldn’t get their heads around it. “They would be like, ‘Oooh cougar … toy boy,’ ” says Shah, a one-person indie pop powerhouse and take-no-prisoners chronicler of the woes besetting modern Britain,

She laughs at the absurdity. But her voice contains a hint of exasperation.

“If a man is dating a woman… my partner is 10 years older than I am. Nobody calls him a ‘cradle snatcher’. Nobody says ‘dirty old man’. It’s ridiculous. He won’t get called it. If I was with someone a year younger, I would have sly remarks. A friend of mine, her husband is three years younger. She gets cheeky comments.”

Shah is presently in lockdown with her aforementioned (older) boyfriend. Home for the next several weeks/months/centuries is a one-bedroom flat in the seaside town of Ramsgate in Kent.

It’s “not particularly plush” but there are views out over the seafront. Once a day they venture out for their government-mandated walk. Their usual route is along the strand. They are hemmed in on one side by the sea and on the other by shuttered fish-and-chip shops and fairground attractions that have lately taken on a haunted aura.

In person Shah is matey and brimming with salty wit. She cuts quite a different figure on record

“One year younger … call me a cougar,” she says, recalling a lyric from Club Cougar. The song is the opening track off her effervescent fourth album, Kitchen Sink (to be released on June 26th, having been shunted from the original date of June 5th).

“I’m being tongue-in-cheek a lot of the time,” she says. “But that’s where the hilarity lies – in these double standards.”

In person Shah is matey and brimming with salty wit. She cuts quite a different figure on record, where she leans into difficult subjects. Her 2013 debut, Love Your Dum and Mad, addressed the suicide of two male acquaintances: her bipolar ex and her older brother’s friend at college.

She was just as searing on Holiday Destination, her Mercury-nominated third album from 2017. “Where would you have me go? I’m second generation don’t you know,” she sings at one point, referencing her mixed Pakistan-Norwegian heritage. Racism, Brexit, the backlash against migrants and the presence of a “a fascist in the White House” were also grappled with. All against the backdrop of the flight of refugees from Syria’s civil war.

Kitchen Sink is more personal, she says. But the political angle is still there, not far from the surface.

“I’m talking about gender politics, sexism, misogyny, the policing of women’s bodies. Because a lot of it is written from my own point of view, there isn’t the weight of responsibility that there was on the last album. Refugees, the Syrian war, the rise of nationalism – you have to be responsible in how you talk about those things.”

Somebody might say something like, ‘I’ve just split with my partner of nine years. And now I’m 41. And I’m terrified’

One of the subjects Kitchen Sink tackles is societal pressure on women in their 30s – Shah is 34 – to settle down and have children. “It is definitely a thing that is present in conversation between me and my friends around the dinner table or at the bar,” she says. “Somebody might say something like, ‘I’ve just split with my partner of nine years. And now I’m 41. And I’m terrified.’

“Then there’s this panic: ‘Do I need to rush to find a partner to settle down with?’ Whether that is to marry or, especially, have a child with … You get referred to as a ticking time bomb. People don’t realise the pressures that come with this.”

She brings up her own age, about which she is matter of fact. “I talk about it. When I’m asked I give the correct answer. A lot of woman are reluctant. ‘You shouldn’t ask ... It’s a bit rude.’ It’s not rude. It’s a question.

“But it is rude if the next bit is, ‘Oh, you’d better hurry on then.’ It is such a strain. It can be such a caustic thought that can get in the way of you making proper, informed decisions. Because of fear and having to be hasty.”

If anything it’s even more difficult for women with the lockdown, she goes on. “They go on Instagram, they see people who have settled down with their husband and their children, in the homes they have bought. That makes them feel even lonelier at the moment.

“It’s another constant reminder that I should have done this sooner. I should be in a house that I bought with my husband, with our kids. Here I am, 36, by myself in a flat I’m renting. It was always present but especially now as we’re forced to look even more so into people’s lives.

Shah moved to London as a teenager with dreams of becoming a jazz singer. She grew up in South Shields, four miles from Newcastle. This is not to be confused with nearby North Shields, where a young Sting came of age and that voted overwhelmingly for Brexit in 2016.

South Shields is a microcosm of the other Britain: the tolerant and multicultural one it is important to remember still exists. Since the late 19th century it has been home to a significant Yemeni community. In 1977 Muhammad Ali and his wife, Veronica Porché, arrived at the local Al-Ahzar mosque in an open-top bus to have their marriage publicly blessed.

This is the sort of place where the daughter of a Pakistani father and an English mother with a Norwegian background could spend her childhood feeling she belonged.

I recognised that [racism] growing up, in certain pockets of the northeast. I wouldn’t see it as much in London but it does still exist there

“Where I grew up is very tolerant historically. It’s a port town,” says Shah. “You go down to Sunderland, there was an awful lot of that racism, that rhetoric, present. Then again these are very very poor people who have been manipulated.

“I recognised that [racism] growing up, in certain pockets of the northeast. I wouldn’t see it as much in London but it does still exist there. And in other parts of the country as well. I saw it growing up, in school. I would lie about where I was from [that is, her Pakistani heritage].”

Music is only part of what she does. Shah has worked with the Samaritans and spoken at schools in east London as part of the Not in My Name Campaign, in which members of the Muslim community publicly oppose Isis. (She also has a frankly baffling fascination with music journalists and has just started an Instagram series in which she interviews sundry unwashed hacks.) And as someone with her head screwed on, she is appalled by Brexit and the rise to power of gung-ho gadabout Boris Johnson.

The blundering British response to the pandemic has presented Johnson’s critics with an open goal. Shah is, however, wary of coming across as triumphalist. Now is not the time for finger-wagging.

“I really don’t like to be of that school of thought that says, ‘Told you so, who’s laughing now, eh?’ That’s not going to help the conversation. If we do start saying, ‘Well, we told you so’ –  us Guardian readers, all this lot – that will only make people bite and bark back. We don’t want to go back to people and say, ‘Well, your fault’. That’s only going to separate us further.”

Ahead of last December’s UK general election, she was one of a number of music industry figures to put their names to a letter backing Labour leader Jeremy Corbyn against Johnson. She was in esteemed company, with Stormzy, Kano, Professor Green, Ghetts and Shura among the other signatories.

I am really hopeful now for a Labour government under the leadership of Keir Starmer. I think he’s going to be great

Corbyn, of course, wasn’t universally beloved –  not even among liberal indie rock types. It was felt by many that his old-school socialism made him fundamentally unelectable.

“Jeremy Corbyn wasn’t who I initially wanted to be Labour leader,” says Shah. “But I am a supporter of the Labour Party. So once he was elected Labour leader, I endorsed him. Before, I actually liked Yvette Cooper and Andy Burnham. I’m very, very pleased right now that we have Keir Starmer. I think he’ll be a great leader.”

Was Shah surprised by Corbyn’s defeat to Johnson in December?

“I wasn’t shocked at all,” she says. “I loved so many things that Jeremy Corbyn stood for. I didn’t think that he would win. If that’s your Labour leader, that’s who you have to support. You just have to. Because I really want there to be a Labour government. I wasn’t surprised [he lost]. I was surprised at how significant and drastic the numbers were.

“That was quite shocking. But I am really hopeful now for a Labour government under the leadership of Keir Starmer. I think he’s going to be great. He will be a really popular Labour leader, I think. He’s a good man.”