Moses Sumney: ‘My role in the system is to try to dismantle it’

From the Blue Ridge mountains, the nonconformist speaks of superficial fun and art 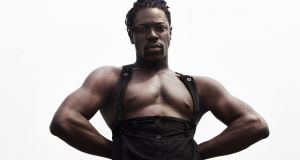 “I’ve never sacrificed any level of artistry, or of speaking my mind, or dressing the way I want to become more palatable to the public.”

Like all profound art, there’s a myriad of meanings in Moses Sumney’s album Græ. In exploring the chasm between black and white, the music itself varies between outlandish experimentalism and pop accessibility, and on a societal scale, it passes comment on today’s divided society – like America’s binary political system, for starters.

But its primary meaning relates to the nonconformist, multiplicitous nature of the rising singer himself. And so we find a muscly, towering black man in sparkles and halterneck; an introvert who stepped away from the inner circles of LA’s party scene to seek solitude. The album even begins with Insula, a timely ode to isolation, recorded well before it became a buzzword of the coronavirus times.

“Moses was a prophet, that’s all I have to say about it,” he laughs boisterously. “I’ve been invested in exploring what isolation means for a while. I couldn’t have predicted the current global climate, but it is a funny coincidence.”

Sumney should have been speaking from Europe, promoting the recently released Græ: Part 1, and preparing us for Part 2, due imminently. Instead, he’s in his home in Asheville, at the foothills of the Blue Ridge mountains in North Carolina, where he’s hunkered down for the duration of the lockdown.

“I’m finding lockdown okay. I think introverts are taking it in our stride,” he says. “I already live in a state of semi-isolation when I’m at home, because I don’t really know many people here and I don’t really go out.

“A lot of my work has been cancelled, but that’s life. I’ll continue with the plan, and time will tell whether releasing the album now has hurt or helped me. I have a lot of shows, events, museum installation that got cancelled, and they’re the nice things that spread the word of the record.

“However” – and his purposeful diction is entirely suited to using the word in casual conversation – “one of the primary challenges in releasing a record is that people don’t have time to consume it in the modern age. So who knows, maybe people will have more time to listen to the record if they have nothing better to do.”

It’s certainly one that needs the listener’s full attention. Atop Sumney’s textured vocals, Græ is dense with ideas and curveballs, stopping for breath only in its spoken word interludes. It’s a sure step away from his debut, Aromanticism (2017), which quietly introduced Sumney to the world, occupying the same field as late-night vibers like SBTRKT and Bon Iver.

“I’ve always felt maximalist at heart, and one of the challenges I gave myself was to not put everything on a record because of that, so the first album was quite minimalistic,” he says, ever the nonconformist. “I wanted to teach myself about minimalism, and learn how to produce properly. So going into Græ, I was interested in doing everything possible within my means, and I felt more capable of doing that because I had the experience of being in the driver’s seat.”

It was during the creation of the debut that he became something of a notable personality in LA. After graduating from UCLA with a degree in creative writing and poetry, he created content for Alicia Silverstone’s website and corporate social media accounts. In between, the buzz around his musical talent impressed the likes of Solange (who introduced him to Grizzly Bear’s Chris Taylor, who in turn released Sumney’s first single, Seeds, in 2015), James Blake (who he toured with) and Beck (who picked him as a Song Reader collaborator).

“I lived in LA for seven years and it was probably the last two years where I thought, ‘I’ve made it to the point where I’m poppin!’”

How did he find that era of being on LA’s proverbial guest list?

“It was fun, but it was superficial fun, and it was sad,” he says. “So many people you see at the thing are sad. Everyone’s desperate to be cool and liked, and it’s kind of gross. I think those environments affected me.”

Eventually, “I realised all that s**t – going to the parties and being in the cool magazines, which comes from socialising – didn’t matter. I thought if I were to die, what’s the thing I want to be remembered by? That I wore a cool outfit to a party, or I made something that affected someone emotionally? Some people can do both. But I can’t, not over an extended period of time.

“Aromanticism took me about four years to make and I knew I wanted to make the second album in two years,” he continues. “I was conscious of that there’s a pressure in making your second album, that ‘sophomore slump’. The challenge for talented artists is always to make sure that your last work wasn’t your best work. For me that comes about by putting myself in a place of discomfort, and trying new things and experimenting and challenging myself.”

That heralded the end of his time in LA.

“Also, I feel like LA pushed me out,” he adds. “My friendships started to get really weird. That was part of what helped, from my personal relationships becoming strained for many different reasons. That was the universe giving me a little push.”

Sumney is no stranger to relocating. His parents, pastors who themselves moved between Ghana, Europe, Canada and America, uprooted the family to the Ghanaian capital of Accra when Sumney was 10, and after a fish-out-of-water spell for him, they returned to smalltown California when he was 16.

After LA, he moved to London hoping it would be his next home “but it was the same kind of partying, and without the sadness. I liked it there a little too much.” It lasted three months.

That’s why we find him in splendid isolation in North Carolina today, awaiting the second part of Græ from home. “Sonically Part 2 is a little bit more intimate, it’s a little more introspective. It feels more connected to Aromanticism for sure.”

While an installation in New York’s Moma Ps2, the Museum of Modern Art’s experimental gallery, is the major casualty of Græ’s launch, at least his video for Cut Me has made it to the outside world. Directed by Sumney himself, it shows he’s come into his own visually as well as sonically.

“Being multidisciplinary makes for a much more interesting patchwork of a career,” he says. “I started mostly as a writer before I was able to identify myself as any kind of musician. Coming from that background, I have diverse interests. And the older I get, the more interested I am in communicating with the world as an artist or as a storyteller, instead of just as a musician or a singer.

“I think life is just so rich and complicated and, if I’m allowed to, I want to explore as many mediums as possible. I’m having fun branching out and directing more, and doing more installation work, and mixing it up as much as possible. I constantly want to feel like a rookie. That’s the best way.”

If the coronavirus storm passes in time, he hopes to be back on the road in autumn, with a date in Ireland already pencilled in. It will be his second visit, after playing Electric Picnic in 2017.

I ask him what happens now, to this otherworldly, uncategorisable artist who – if the album reaches its potential – may have to work more within “the system”, with its commercial pressures and all that entails. I already half-know the answer, given the sparkles and halterneck look was aired on his debut TV performance, on Late Night with Stephen Colbert.

“I love that question, because it implies that I’m popular: ego in the time of coronavirus,” he says, laughing. “We’ll see where it goes, but I haven’t reached a level of success where I feel like my ability to do whatever I want is compromised. I’ve never sacrificed any level of artistry, or of speaking my mind, or dressing the way I want, in order to become more palatable to the public. It’s got me this far and I would imagine that it will continue to take me where I want to go.

“Everyone has a role as it relates to the system. And I think my role in the system is to challenge it, and try to dismantle it, even if that’s from within.”