Minister for Arts wants gender policies in place next year 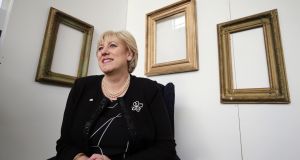 Minister for Arts Heather Humphreys: could have drawn up a gender-equality policy that would apply to any organisation or individual receiving funding from her department. Photograph Nick Bradshaw

Kilkenny Arts Festival found itself in a scrap about gender balance when it announced its classical programme last month. Laurence Mackin’s report on the announcement concluded that “women are notable by their absence”, and counted the male-female balance among soloists and main performers as 22 to eight. And it was hardly surprising that, since Kilkenny focuses on the core of the classical canon, no women made it into the list of composers.

The festival was clearly stung, and has put a statement on its website, delving into the membership of chamber ensembles to raise the female count from eight to 12. It did not, of course, point out that the male count would also rise on this basis, but by three, not four. And, it triumphantly concludes that across all the events so far announced “76 male and 72 female artists” are so far due to perform. On the other hand, there’s also the fact that seven events are all-male line-ups and not a single one is all-female.

You might be surprised to know that the Minister for Arts, Heather Humphreys, is already on the case. No, she has not intervened in any direct way in the discussion about Kilkenny. But, just a day after the Kilkenny statement, she hosted a gender-policy workshop, which brought together representatives from the National Cultural Institutions, the Irish Film Board, the Arts Council, Culture Ireland, senior officials from her department and Waking the Feminists. And she has asked the cultural institutions to “put gender policies in place in time for the centenary of women’s suffrage in 2018”.

It is a welcome and long-overdue move, although it is not by any means the most decisive move she could have made. That would have been to draw up an appropriate gender policy for her own department, a policy that would apply to any organisation or individual receiving funding from the department. That would have had very immediate real-world bite.

Just imagine if political parties had been allowed to handle the gender quota issue according to their own lights. Given the squeals of objection that came from some of them, it’s not hard to see how that would have worked out.

The Kilkenny statement did try to balance the festival’s position by revealing that it has been working on “a number of projects involving new work by contemporary Irish female composers”. But the absence of information at this stage, and, more significantly, the absence of these projects from the initial announcement, is damagingly revealing about where the festival sees these events in the larger pecking order.

From a musical point of view, the major absence from the Minister’s workshop was RTÉ, and the reason is clear. RTÉ is not part of her remit, but is in the brief of Denis Naughten as Minister for Communications.

For two years now, RTÉ has run a Composer Lab scheme in partnership with the Contemporary Music Centre. It’s a scheme to bring younger composers into the world of writing for orchestra. Strange as it may seem, access to the RTÉ orchestras by emerging composers went into decline from the 1980s onwards after the National Concert Hall opened and RTÉ abandoned the style of programming it had pursued through free concerts when it was based in the SFX.

Last year, the three composers chosen for the scheme were Amanda Feery, Scott McLaughlin, and Eric Skytterholm Egan. This year there are four: David Bremner, Seán Doherty, Francis Heery and Matthew Whiteside. Just one of the seven beneficiaries of the scheme has been a woman, although the proportion of composers who are female is closer to one in four.

Only three of the composers – Amanda Feery, Francis Heery and Scott McLaughlin – were born and educated in the Republic

There may have been no gender policy involved in the choice of the Composer Lab composers. Curiously, however, the power of another policy is everywhere to be seen. Article 2 of the Constitution, as amended after the referendum of 1998, states that “It is the entitlement and birthright of every person born on the island of Ireland, which includes its islands and seas, to be part of the Irish nation. That is also the entitlement of all persons otherwise qualified in accordance with law to be citizens of Ireland. Furthermore, the Irish nation cherishes its special affinity with people of Irish ancestry living abroad who share its cultural identity and heritage.”

Only three of the composers – Amanda Feery, Francis Heery and Scott McLaughlin – were born and educated in the Republic. Eric Skytterholm Egan is Norwegian-Irish. David Bremner, who has lived in Ireland since 1999, was born in West Cumbria. Seán Doherty and Matthew Whiteside are Northern Irish. This kind of inclusiveness is not something that comes about by accident. And gender balance will not be set right by accident, either.