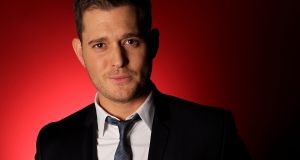 Michael Bublé has announced plans to “retire” from the music industry after admitting he no longer has the desire for fame following his son’s battle with cancer.

The Canadian singer, who has won four Grammys and sold 75 million records, put his career on hold after finding out the five-year-old was diagnosed with liver cancer two years ago.

Noah, one of three children with wife of seven years, Argentinian model and actor Luisana Lopilato, is now in remission.

During an emotional “last interview” Bublé opened up about the devastating impact his son’s illness had on the couple.

“My whole being’s changed. My perception of life. I don’t know if I can even get through this conversation without crying. And I’ve never lost control of my emotions in public,” he told the Daily Mail’s Weekend Magazine.

“I’m retiring from the business,” he said. “I’ve made the perfect record and now I can leave at the very top.”

The 43-year-old explained how the diagnosis made him realise he had become fixated on his own success and can no longer stomach “the celebrity narcissism”.

Bublé will release what appears to be his last album, Love, next month. He has also been working with James Corden on a Carpool Karaoke special edition for the Stand Up To Cancer fundraising campaign. – PA