Over a 30-year career, Lanegan has built a keen following if not the level of success of some of his friends. Which suits him fine 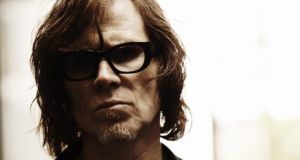 Mark Lanegan: ‘It’s satisfying and gratifying to make your own music, but I personally don’t get the same enjoyment out of the music that I make as I do from somebody else’s music that I like’

It should come as no surprise to find Mark Lanegan is a man of few words, but I have a list of questions in front of me that is dwindling in a worryingly rapid fashion. Lanegan has an illustrious musical history: he is the one-time frontman of grunge pioneers Screaming Trees; a friend of Kurt Cobain and Layne Staley; a successful solo artist and regular collaborator with modern rock icons such as Queens of the Stone Age; a sometime Gutter Twin alongside Greg Dulli of Afghan Whigs . . . the list goes on. Technically, there should be lots to talk about. But Lanegan, barely disguising his ennui, is not the garrulous type.

“Well, the only time I talk about myself is when I’m in a situation like this,” he sighs. “I guess I’ve come to terms with that part of making music. You’ve gotta talk about it.”

He’s not one for big celebrations, either. Despite recently turning 50, he marked it in a low-key way.

“A party?,” he says with an exasperated growl. “No, I’m not much of a partyer. I went out to dinner with a few friends. That was it.”

Lanegan released his ninth solo album, Phantom Radio, earlier this year, a fine collection of grimy, bluesy alt-rock with tinges of krautrock and electronic elements and his trademark throaty rasp in fine fettle. There are audible similarities between it and 2012’s Blues Funeral – a summation he agrees with – despite last year’s covers album, Imitations, coming between the two releases.

“I wanted it to be an extension of those couple of records that had come before it,” he says. “I wanted to use a lot of the same elements, just because I was digging the results of Blues Funeral and parts of Bubblegum [from 2004]. I used the same sort of instrumentation.

“I recorded a couple of songs before I did Imitations, but the bulk of the record was done afterwards, so when I sat down to finish the record, I started with a pretty blank slate.”

As traditional as he may be about most elements of the songwriting process, he is also open to experimentation. Some of the drum parts on Phantom Radio were written on an iPhone app called FunkBox after he sold all of his drum machines. He is obviously not a musician who refuses to part with his collection of vintage gear for sentimental reasons.

“Well, I was one of those musicians who had a collection of that stuff, but I didn’t refuse to part with it,” he says, chuckling. “Yeah, I ended up using the app to make a couple of demos at home. I used it on one song on the record in conjunction with other real drums and machines, and I use a voice recording app on my phone when I’m writing. I’m open to new processes.”

It’s impossible not to mention his fluid collaborative skills, be it with Isobel Campbell on their fine folk-tinged trio of albums, with electronic act Unkle, with Moby or with grunge supergroup Mad Season.

“It’s part of what keeps me interested in music,” he says. “It’s always fun to see other peoples’ point of view, and to see how my thing can sit with somebody else’s thing, and vice-versa.

“I mean honestly, when I’m making records that just have my name on them, I’m also collaborating with the people who are making the record with me. So it’s all relative, really.”

He believes that he has become a better writer over the last few years. “I feel like I’ve gotten better at the entire process of making records,” he shrugs. “I have less songs left over now. I used to throw a lot of stuff against the wall, just to see what ended up sticking; now I’m pretty much using everything that I create for a record.”

Sentimentality and nostalgia don’t feature in his creative process: it’s about looking forward rather than dipping into the well of the past for new ideas. He says that he doesn’t listen back to his early material – ever.

“I would never listen to that stuff unless for some reason I wanted to play something from that era live, which is pretty unlikely,” he says, sighing. “I just prefer to stay in the here and now, really. I don’t listen to my solo records, either, unless I need to learn something for a live situation.

“When I’m listening to music for pleasure, I’m gonna listen to someone else’s music. It’s satisfying and gratifying to make your own music, but I personally don’t get the same enjoyment out of the music that I make as I do from somebody else’s music that I like.”

He volunteers the information that Swans’ To Be Kind has been his go-to record in recent months, but it’s more difficult to find out what books or films he may have enjoyed throughout the year. “Yup, I do all that stuff,” he says curtly. “I read books, I watch films. I also go out to eat, walk my dogs, other stuff that everyone else does.”

Silence. I ask whether he’s ever considered writing his own memoirs, given the number of different acts that he’s been involved with over the years, and the fact that he recently celebrated 30 years as a musician since forming Screaming Trees in 1984.

“I have been approached, but I’m not interested in doing that stuff,” he says. “I guess I feel like there’s more interesting stuff to spend my time doing. I’m perfectly happy to make up songs and do that, but I’m not really one to do introspective stuff outside of that.”

That lack of an introspective nature also means that he doesn’t dwell on what might have been if one of his projects had gone stratospheric; he is not envious of his friends and collaborators who tour arenas, and harbours no desire to be a household name. No desire to sell himself, really. It’s just as well that the music is marketable.

“I’ve had my opportunities to do big shows, and I still do the odd festival every year, so it’s not like I’m missing out on something,” he says with one last heaving sigh.

“If you’re talking about massive success, I’ve always been pleasantly surprised that anybody has wanted to listen to my music – so for me, I’ve been successful beyond my wildest expectations. I’m perfectly happy with the way things have worked out. It’s all been unexpected. It’s all icing on the cake.”