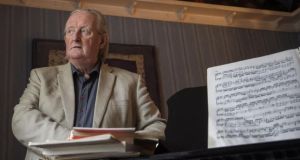 As news of the death of the pioneering composer and musician Mícheál Ó Súilleabháin spread today, tributes to his music and his influence flowed.

Sandra Joyce, the director of the University of Limerick’s Irish World Academy of Music and Dance, said staff and students were profoundly saddened by his death. “Mícheál was the driving force behind the establishment and growth of the Irish World Academy since his appointment as chair of music, in 1994.” Those who worked with him were “swept along by his incredible energy, joie de vivre and vision”, she said.

His achievements include establishing unique programmes in music and dance, the equal honouring of performance and reflection, and the academy building, “which has been aptly christened the House of Light. Mícheál has been a major international figure in the arts, and has been particularly important as an educator, composer and performer.

“However, for many of us who knew him personally, it is his generosity of spirit, his unique turn of phrase, his thoughtfulness and his irrepressible energy which come to mind today. He is irreplaceable, but his legacy is assured.”

His legacy lies in a lifetime of recorded and published work, and among those he inspired, nurtured and encouraged to explore and enjoy the richness of traditional music

The Irish Traditional Music Archive said of its friend and former chairman: “He profoundly influenced and will continue to influence generations of traditional musicians and researchers. He pushed boundaries from a place of deep knowledge and respect for the tradition, exploring ways to express the intricacies of the art form in both language and performance. His legacy lies in a lifetime of recorded and published work, and among those whom he inspired, nurtured and encouraged to explore and enjoy the richness of traditional music.”

The archive’s director, Grace Toland, said Ó Súilleabháin had an ability to connect and share his passion for music with everyone he met. He left a great legacy among young musicians and students, she said, and in placing traditional music on a par with classical music, treating it with respect, and developing a language around traditional music, to explain it. He and his friend Nicholas Carolan, the archive’s founding director, were part of a generation of influencers that had had traditional music recognised and valued as an art form, she said.

Mel Mercier, professor and chair of performing arts at the University of Limerick, said: “I count Mícheál as one of my great friends. I first began to play with him and Nóirín Ní Riain when I was about 14, in the mid-70s, and ever since that time he has been a central figure in my life. He was my teacher and mentor. He was the first to open the door for traditional musicians into the university. I walked through the door [at UCC] with a bodhrán and bones in my hand, and it seemed a terribly unlikely thing to have the opportunity to do.

“At that time we imagined that to study music at university you needed to have a classical instrument or repertoire. Mícheál began his work of elevating the status of traditional music at UCC, where he did the groundwork. He shepherded and nurtured the first generation of traditional Irish musicians in third-level education.”

In 1994 Ó Súilleabháin left UCC for the University of Limerick. Twenty years later, when Ó Súilleabháin retired as chair of music there, Mercier succeeded him. Over the years, Mercier said, they deepened their friendship, musical relationship and shared passion for education. “He was extraordinarily generous, and also an integrational, visionary leader. He had a vision for the elevation of traditional music in education, and he had an extraordinary ability to convince others to buy into his vision. Literally, too: he was gifted at finding funding for his vision, which was always big. He had charisma and intelligence and was an eloquent speaker – his speech was full of poetry.”

Ó Súilleabháin was involved in the Irish Chamber Orchestra moving to Limerick more than 20 years ago, when President Higgins was minister for the arts, culture and the Gaeltacht. “I saw the enthusiasm with which he delivered that project and the commitment that led to the establishment of the Irish World Academy of Music and Dance.” He represented much of what is Irishness at its best, and “left us with an indelible legacy, both through his music and through the academy”.

The musician Donal Lunny said: “Mícheál was always a presence in my life, as a prolific force on the Irish music scene. It was undoubtedly Mícheál’s vision and enthusiasm which propelled the Academy of World Music and Dance to its brilliant realisation. I was thrilled to be asked to contribute to the Blas Summer School over a decade ago, and since then I have visited UL several times a year to teach there. I think the main reason I so enjoyed visiting UL was for what Cardinal Newman called the genius loci, meaning the abiding spirit of the campus, for which I believe Mícheál was mainly responsible.”

Lunny recalled River of Sound, an 11-minute centrepiece they wrote together, and “thanks to Mícheál’s warmth and generosity it was a real collaboration. The last time I met Mícheál was to talk about revisiting River of Sound, but, sadly, it didn’t come to pass. I could tell he was very ill, but, characteristically, he made light of it at the time. A giant of our time. His influence will be felt for generations to come.”

The Irish Chamber Orchestra, which paid tribute to its former board member, said Ó Súilleabháin was instrumental in securing a state-of-the art home for the orchestra on the university’s campus in 2008. “Micheál’s lasting legacy is his music and his World Academy here at UL, which facilitates such a vast array of courses, including the ICO’s MA strings programme. We will miss his expertise, his energy and his camaraderie, always.”

Also paying tribute, Minister for Culture Josepha Madigan said Ó Súilleabháin “played a significant role in the global promotion of Irish arts and culture, both in his memorable performances abroad and, as its first chairman, he shaped the direction of Culture Ireland”, which promotes Irish arts internationally.

The chairwoman of the Arts Council, Sheila Pratschke, and the chairwoman of the National Concert Hall, Maura McGrath, also paid tribute to Ó Súilleabháin, who as a young man studied under the composers Aloys Fleischmann and Seán Ó Riada at University College Cork. Ó Riada’s daughter, Liadh Ní Riada, a candidate in last month’s presidential election, tweeted: “A student of my father’s and always spoke highly of him. Michéal left a great legacy of wonderful compositions & arrangements.”

The University of Limerick, where Ó Súilleabháin was emeritus professor of music, paid tribute to his “series of pioneering solo albums, which repositioned his chosen instrument, the piano, at the heart of Irish traditional music. His richly evocative collaborations with Mel Mercier were a celebration of Ó Súilleabháin’s flinty sense of humour and love of musical exploration.” The professor “left a rich legacy through his own music, as well as the academy he founded, which attracted students from over 50 countries”.