Live review: The Corrs at the Ruby Sessions - ‘Our very own Children of Lír’

The Dundalk band ended their 10-year live hiatus with a secret charity show at the Ruby Sessions. Is it The Right Time for a comeback? 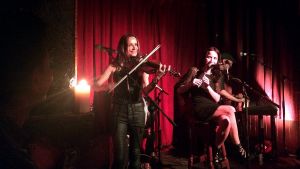 Earlier this week, Bono caused great excitement by tweeting that ‘The Boys are Back in Town’ but little did we know that The Family were back from d’Town for their first gig in 10 years. As U2 play the other side of the Liffey, The Corrs play the intimate Ruby Sessions in Doyle’s Pub, and it’s apparent that none of them has aged in the past 500 years; is it possible that The Corrs are our very own Children of Lír?

Kicking off with I Do What I Like and moving on to their cover of Fleetwood Mac’s Dreams, the energy in the room shifts from excited to ethereal. Super fans Miguel Castillo and Bel Luna – who met on an online Corrs forum and moved to Ireland from Mexico in 2009 because they loved them so much – say that they have been waiting all their lives to see The Corrs play. With approximately 100 people in attendance and all proceeds going to the Simon Community, this gig is testing the waters for their upcoming tour and new album White Light. Things get rowdy once Breathless begins and it escalates during the vigorous reel Toss the Feathers. It would appear that some are ready to dip in more than a toe.

The synchronicity between the siblings comes easily during this short set, making their 10-year absence from the live circuit feel like nothing. The ecstasy of The Corrs is hard to explain but the fervour of the night reaches breaking point during an all-consuming rendition of Runaway. Who knew that their trad-rock fusion would continue to touch us in 2015? Everyone, in a way, is a casual Corrs fan because no home in Ireland is without a copy of their 1997 album Talk on Corners. Their comeback may not mean much to some but for The Corrs and their many diehard fans, this is The Right Time.