Listening cafés: More sedate than a club, more social than your living room 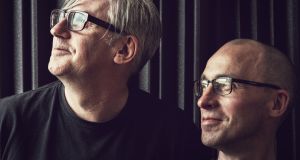 Unlike other musical formats, vinyl has a way of bringing back memories of nights out and gigs of yore.

Eighteen months ago, the team behind This Greedy Pig, a Dublin-based creative agency, hatched a plan to recreate a Japanese listening room in Dublin. Such venues invite patrons to sit back, have a drink, and listen to vinyl records on high-end sound systems. It’s more sedate than a nightclub, but more social than your living room. In recent years, the concept has taken off internationally with several listening cafés cropping up around London, Los Angeles, and elsewhere.

After pitching the idea to Hennessy, the team behind This Greedy Pig set about transforming Hen’s Teeth, a gallery space on Fade Street, into a cosy listening room. Fitted out with a bespoke sound system designed by the in-demand Toby Hatchett, the space became the Hennessy Sound Lounge.

Last July, they hosted a series of events in which well-known vinyl aficionados were invited to share some of their favourite records and discuss their lives and careers through the prism of music, à la Desert Island Discs. It went down a treat with punters and participants alike.

“It’s a very different way of enjoying music,” says Rosie Gogan-Keogh of This Greedy Pig. “It’s more intimate, it’s a bit of a slower pace, and it’s about being able to take a step back and appreciate something in a slow fashion.”

With the recent vinyl revival, the timing of such an event could not be better. As such, the concept is being brought back to life at this year’s Body & Soul Festival. Once again, a number of vinyl collectors will dig into their collections and present a specially curated playlist of their most cherished records.

Additionally, a host of Irish and international DJs will spin tunes into the wee hours. “It’s kind of vinyl only and that in itself… forces people to consider what set they’re going to play and they’ve all really embraced it,” says Greg Spring of This Greedy Pig.

Among the vinyl enthusiasts slated to take part is DJ and producer Mathman, one half of hip-hop duo Mango x Mathman. Mathman says he grew up steeped in vinyl culture. “I was a victim of the peer group that I had when I was growing up,” he recalls. “I was about eleven or twelve, and the older lads on the estate were all DJs.” He started acquiring his own records when he was just fourteen years old.

These days, he estimates that he has thousands of vinyl records, most of which are housed in his mother’s attic. He continues to buy records, often investing in oldies he couldn’t afford as a youngster. “I couldn’t buy them for love nor money when they first came out and now people are practically giving them away,” he says.

Asked to single out his most cherished record, he doesn’t hesitate.

“When I was sixteen, seventeen, pirate radio was a big deal in Dublin,” he says. “All of the radio stations, whether it was Club FM or Energy or Pulse, there was a track that every station was playing. It was big nowhere else but Dublin and it was called Unlimited Dreams by SPQR.

“This song… you couldn’t get it anywhere. Nobody had it and anybody that did have it didn’t want to sell it.

“I heard a friend of mine through another friend through another friend had a copy of this and they weren’t really into DJing anymore. I remember buying it off him for fifty pounds and people were like, ‘What are you doing? Fifty quid?’ I just wanted that record so much. It was just the most incredible record I didn’t have in my collection.

“There are so many cuts to talk about and great memories, but that one stands out.”

Unlike other musical formats, vinyl has a way of bringing back memories of nights out and gigs of yore.

“You can see the fingerprints from where [the record] was played so many times in club,” explains Greg Dowling, one half of the legendary Irish house duo Fish Go Deep. “If you’re scrolling through USB stick, you wouldn’t get the same vibe. It’s just names and numbers.”

Over the years, Dowling has amassed thousands upon thousands of records, many of which are now collectors’ items.

“We owned a record shop in Cork so I have so much early house music that nobody has,” he says. “I see them on [online music marketplace] Discogs and I go, ‘Are they worth that much?’ Back then, a lot of stuff was coming from tiny little labels in New York or Chicago and they might have pressed only three or four hundred copies.”

Has he ever felt tempted to downsize or sell them on? “My wife wishes I would anyway,” he laughs. “There is probably loads of stuff that wouldn’t be that amazing and that I should probably get rid of. But I find it kind of hard, I don’t know why.”

While most DJs don’t tend to use vinyl and turntables anymore, Dowling says something special happens when you mix two records together seamlessly.

“It’s a beautiful thing when they’re right on the button,” he says. “They go together and suddenly you’re going, ‘Woah, those two turned into one’. I don’t ever get quite the same feeling from the visual thing.”

Another vinyl fan set to perform at this year’s Hennessy Sound Lounge is Cian Murphy, one half of I Am The Cosmos and the owner of Optic Music. Optic Music is a record shop based out of The Big Romance, a vinyl bar on Parnell Street. Murphy has spent most of his adult life working in record shops around Dublin and has his own collection of “oddities” and “weird records”.

“I love the classic albums but for me there’s something about finding something unusual and something maybe not too many people have discovered that would connect with me a little bit more,” he says.

As a musician, DJ, and record shop owner, Murphy is well placed to analyse why so many people have opted to rekindle their love of vinyl.

“There is maybe a bit of disillusionment with just having a Spotify account,” he says. “It might also play into people’s egos a little bit in that you can’t take a huge amount of pride in a Spotify playlist in the same way that you can a wall of records you can actually pull from.

“Then there is that obvious ritualistic element of taking the record out, opening up the gatefold, looking at the artwork and actually putting the needle on the record.

“It’s almost a cliché to say that, but I really do think there’s something more valuable there. To some people anyway.”

Visit the Hennessy Sound Lounge at Body & Soul in Ballinlough Castle from June 21-23.