Kim Gordon: The bands, the blues, and other sonic truths 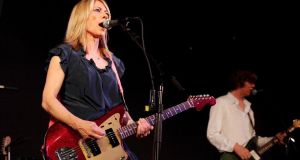 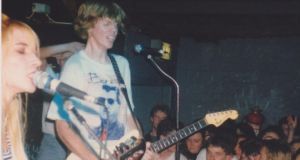 Thurston Moore and Kim Gordon of Sonic Youth at Sir Henry’s in Cork when the band played there in August 1991. Photograph: Eamonn Cunningham

One of the most surprising things about Kim Gordon, when she picks up the phone on the American west coast, is how quiet she sounds. Seeing as she’s the bass player in one of the most musically interesting and decibel-bending bands of the past 30 years, it’s all too easy to conflate the on- and off-stage personas.

Gordon addresses this, and many personal issues, in her memoir, Girl in a Band, and today she is soft-spoken and unfailingly polite discussing aspects of the book that detail her introspection and how it seems at odds with being on stage.

“A lot of performers are, seemingly, quiet; actors too, because you have to put yourself into other roles. So it wasn’t surprising to me that I ended up performing,” she says. “It’s a place where you can act on emotions . . . and no one can touch you there. As a kid, I felt like I couldn’t show my feelings, because my brother teased me so much. It was painful, but I always feel on stage that I’m free.”

Gordon grew up in California, where her father was a professor at UCLA and her mother was a seamstress. Her only sibling was her older brother, Keller, who she describes as “brilliant, manipulative, sadistic and arrogant” and who, she says, taunted and undermined her. He was “incessantly verbal”, and this made his sister more insular and shy. He was later diagnosed as a paranoid schizophrenic.

“He really did influence me, and I think the reason I probably ended up playing music with a bunch of guys was because maybe I was looking for that better relationship with my brother,” Gordon says.

While her brother became interested in poetry, Gordon gravitated towards art at York University in Toronto. It was here, for a project, that she formed her first band, Below the Belt. They played a handful of times, which was enough for Gordon to realise she liked performing. In the audience was Mike Kelley, who became a friend, and they eventually set off for New York together.

On arrival in the city, she stayed with the artist Cindy Sherman, and began a peripatetic period of crashing with friends. One flatmate gave her an old Drifter guitar, and another brought her to see Thurston Moore’s band The Coachmen. After their first date some weeks later, Moore spotted the Drifter in her apartment and told her he had once played that very guitar.

That was that. They formed Sonic Youth in 1981, and punk and no-wave were both influences. Gordon also loved jazz, and found it difficult to define the heavily distorted sound the band had. Dissonant and hypnotic, they were confrontational but capable of humour and occasional tender moments. “I told a dentist once that we were post-Beatles,” she says, laughing. “I also used to say we were post-punk, experimental, or in the vein of the Velvet Underground.”

That tenderness is most evident in Tunic (Song for Karen), a gut-punch paean to singer Karen Carpenter. Alongside her brother Richard in the duo The Carpenters, she was hugely successful until succumbing to anorexia aged 32. In the song, Gordon sings, “I feel like I’m disappearing, getting smaller every day”. She says it had extra resonance because of of her own complicated relationship with her brother.

“I saw them as this success story, and American success stories are rarely what they seem to be,” she adds. “The anorexia issue aside, she really represented the fact that a lot of women use their bodies in different ways. It’s as if their body is the only thing they have control over in their life. This idea of having to be perfect and be able to do everything . . . She’s such an interesting figure and had a sexy and soulful voice.”

Gordon’s own experiences of being a woman in music were, unsurprisingly, very different. When Sonic Youth toured the UK, every journalist asked, “What’s it like to be the girl in the band?” – hence the book’s title – and she grew weary of it. Sonic Youth was a democracy in which each person had their role, and in the book Gordon say that it wasn’t until they signed to Geffen (and released Goo in 1990) that “the need to be a woman out in front never entered my mind at all”.

I’ve interviewed women musicians, from The Slits to Joan Jett to X-Ray Spex’s Poly Styrene, who recounted memories of violence and having bottles thrown at them on stage. Gordon says the worst of her experiences of occasional sexism came from random sound engineers in clubs. “Although, when we were on tour with Neil Young, it felt like a men’s club,” she says. “Not because of Neil, but some of his crew thought it was weird that I was in the band. They were from another time . . . They thought we were punks, so they were waiting for us to act out. Our music was so weird to them.”

The band’s current line-up has remained largely consistent for three decades, with Steve Shelley, Lee Ranaldo and Thurston Moore. Moore and Gordon married in 1984 and have a 20-year-old daughter, Coco. Much has been made of the end of their marriage in 2011, when Gordon discovered Moore was having an affair with a younger woman.

The book reveals the whole story: Moore lied about the other relationship and ended it multiple times while continuing to deceive Gordon. It’s hurtful to read, and it’s hard to be sympathetic to Moore.

“It’s something that happens to a lot of people. It’s not special. Whether I want to be or not, I’m kind of a role model and I think it was important . . .” she trails off and goes quiet.

“I tried to be as tasteful as I could, to not reveal everything and to get what happened across in the most straightforward way. I understand that people change and that you can’t help who you fall in love with, but what it did to my daughter . . .

“ In some ways it made me unstuck from my life, but I’m also grateful for other amazing things that have happened since then.

“It’s sad, but it has also been a way of clearing the air. But it had to be in there, it’s a big arc to my story.

“It plants me where I am now and sets me up for the sequel,” she adds, laughing. “No, just kidding.”

While the book is not about grinding axes or settling scores, Gordon is not afraid to be blunt. Courtney Love – Gordon produced her band Hole’s album Pretty on the Inside – is a “car crash” and “utterly self-absorbed”, while Billy Corgan of The Smashing Pumpkins is a “cry baby”.

Gordon was close to Kurt Cobain and gives a fascinating insight into his vulnerability.

Girl in a Band

“Writing things down gives you perspective,” she says. “It was a way to clear the air and help me figure things out, but give me some distance from it at the same time.”

After the recent traumas, she sounds relaxed and has a lot of good things going on. She has been making art and producing music as Body/Head, and it’s this duality that dominates the book. It’s as much an exploration of herself as a musician as an artist.

“I realised that I had neglected something that was so vital to who I was. In 2003, I started turning more towards art, and it’s been that way ever since. It was always on my mind, and still is.”

Girl in a Band: A Memoir, by Kim Gordon, is published by Faber