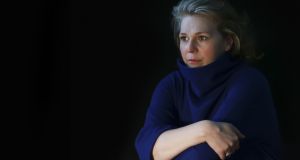 Kathleen Turner: ‘I think that young people from across communities found a lot of hope, singing together and it also gave us a lot of agency.’ Photograph: Deirdre Power

Percolation. That subtle process of filtration is at the heart of Kathleen Turner’s music. She tells stories populated by characters who have lived life close to the bone. Shot through with grit and gumption. Tales of women figuring out their own place in the world.

Turner, a native of Tummery, outside Omagh, and a member of the faculty of the Irish World Academy of Music and Dance at the University of Limerick is a singer-songwriter who’s both delighted and relieved to have released her debut album, Like a Lion.

She’s released two EPs previously: 2014’s Some Stories, and The Lines Between Us in 2017. But the 10 songs she’s gathered together for her first long playing collection are all of a piece: knitted together in ways that are not immediately evident to the listener, but instead make themselves known with a subtlety that bears up well to repeated listening.

“Everything [on her album] is in some way connected to power, vulnerability and agency,” Turner says. “Songs like Shake the Dust are inspired by a story I read on Humans of New York [a photo blog of portraits and interviews collected on the streets of New York city]. There was one particular story where a girl in a refugee camp described her goal of being a pilot as ‘wanting to be a leader in the skies’. I just thought, imagine: to find yourself in such dire circumstances and yet to have that level of ambition. So the songs are all threaded back to notions of power, of agency and of taking up your space, and on the opposite side of that coin, of being very vulnerable. So the whole album is about powerful women.”

Turner has had a long history of engagement with and commitment to community music. It’s been her lifeline, both creatively and academically and its imprint can be felt throughout her debut album.

“Community music in its essence is based on the fundamental belief that everyone is innately creative and everyone has something to contribute,” Turner explains, “and my job is to help people tap into that, to create a space where they are allowed to do that, because they can be quite vulnerable. It can be quite intimidating, if you don’t see yourself as an artist.”

Turner first encountered the power of community music through her own involvement in a choir established in Omagh in the wake of the bombing in 1998. That followed an earlier powerful experience of being part of the United Nations choir, from the age of 13.

“I learned from a very early age that making music collectively can be very impactful,” she says, smiling, reflecting on those early formative experiences. “The Omagh Community Youth Choir made a huge impression on me. I learned how the music we made in that choir became a space for something else. It was about the music, but it was also about connecting back into a space for people to grieve. I think that young people from across communities found a lot of hope, singing together and it also gave us a lot of agency. Suddenly we were singing for politicians, for dignitaries, but we were also singing for grieving families.”

The history of community music is strongly connected with community activism and the concept of equality, both of which are at the heart of Turner’s debut collection.

“A lot of community musicians you will find in spaces where it’s traditionally been difficult to access the arts: places like hospitals and justice systems”, Turner offers, and clearly she’s an artist who thrives in those in between spaces where, as Patrick Kavanagh wrote, “life pours ordinary plenty”. “You might find it in choirs for people with dementia or in youth centres where it may be something that can help young people to articulate pain, to address issues of mental health and things like that.”

I don’t feel angry very often but when I do, I need to do something with it and make it into something else, something bright

Turner is a storyteller. That’s her medium. Drawing the listener into a song by fleshing out its history in her introductions. Much of that capacity for nurturing her audience came from her early experiences listening to her older sister, Juliet Turner. A singer/songwriter who achieved considerable success in the 1990s, Kathleen would tag along with Juliet to her gigs, eventually contribute backing vocals, but mostly just listening and watching.

“Juliet was and continues to be a very powerful and positive influence,” says Kathleen. “I was inspired by how she helped audiences connect to her songs: she loves the story in the song. And the other thing that blows me away about her songwriting is the lyrical content: they’re so powerful, so poetic, and so detailed. Her turns of phrase are so clever, and so ornate, and so now as a consequence I have an allergy to lazy lyrics. She’s so thoughtful about it.”

These days Kathleen Turner finds herself drawn to podcasts and spoken word artists more than to traditional album sources. Words are undeniably the beating heart of how she makes – and distils music.

“In terms of musical influences, I listen to a lot of podcasts, so I’m very influenced by conversation, story and story tellers”, she concedes. “The two most listened to albums on my phone this year have been from Janelle Monae and Kate Tempest, probably for that same reason. Both – in very different ways – are powerful communicators. My go-to places for new music are the Tiny Desk NPR concerts on YouTube. Tank and the Bangas and Common in particular are two I keep going back to. I think I’m influenced more by how people present their work than the specific sound – for example, Tank is entirely at ease in herself. She’s very communicative, and she’s weaving a connection with the audience. I love that.”

The title track of Turner’s album, Like a Lion, is a touchstone for much of what has informed not just her music, but this country, over recent years, thanks to the marriage equality and Eighth Amendment referendums.

“I don’t feel angry very often”, she says, “but when I do, I need to do something with it and make it into something else, something bright. That song and its title came out of a conversation I had during my fellowship year, when I was on the Clore Leadership Programme [in London]. I was travelling and experiencing so much in Glasgow, in New Zealand, and I attended a conference in Tbilisi, Georgia. Alongside it the referendum was going on and I was looking around me at powerful women like Róisín Ingle and [performance artist] Amanda Palmer. I made it my business to study and watch the different ways that women were being creative.”

I’ve stopped putting myself in boxes

Percolation. There it was again. Ideas began to jostle, and to find purchase in the wake of this tidal wave of a political movement that defined Repeal so powerfully.

“I used to train in Thai boxing and I used to go in like a lion and leave like a lamb,” Kathleen says, by way of explanation for the genesis of that ferocious opening track. “And the coach I had during my fellowship just said to me: what would it be like if you just went in like a lion, Kathleen, and stop trying to be like a lamb. And what if you applied that to loads of things? So that stuck in my mind.

“Then the [abortion] referendum happened and the notion that when you collectively act, you can make things happen. And I suppose that lyric just made sense to me: ‘Our teeth and our claws, yes/We’ll tear it apart with/The might of our jaws, yes/The muscle of the pride/Daughters at our side/Look what happens when we go in/Like a lion.’

Between her songwriting, singing, research, multimedia collaborations (with aerial dance artists who are contributing to a video for Puzzle, one of her songs) and teaching, Kathleen Turner seems to have mastered the art of managing the multiple facets of her own identity.

“I’ve stopped putting myself in boxes,” she laughs. “My PhD helped me to see that: that these are all just parts of me. It’s no longer the case that I see this space as being me as a community musician, and that space is me as a performer. There’s a connection between all of them and I carry all of myself into all of those spaces.”

Kathleen Turner’s debut album, Like a Lion is out now: kathleenturner.bandcamp.com