Janelle Monáe in Dublin: ‘We have to fight for immigrants, the disabled, the LGBTQIA+ community’

Review: Monáe is as inventive as she is exhilarating at her Trinity College concert 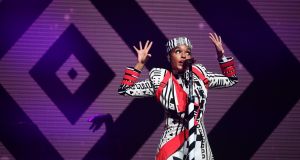 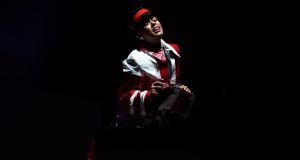 On a sunny Dublin evening, the residue of Pride weekend has barely evaporated from the streets and the skin of marchers and ravers. Janelle Monáe is in town.

With a career rooted in concept records, Monáe professes to come from the future, but her urgent, brilliant music is all about right here, right now.

Grace Carter opens Wednesday’s Trinity College Summer Series evening, a young woman singing songs largely written about childhood experiences, excelling with the brace of Heal Me and Fight For You. “You’re all so friendly, I want to live here!” she exclaims at one point. There’s definitely something liveable and loveable about Trinity College in the sun of a Wednesday evening.

Janelle Monáe’s set at Glastonbury was one of the most buzzed about gigs of the festival, in a festival loaded with buzzed-about sets. That weekend is over, and she has landed in the Irish capital to fill a slot in a packed summer schedule of outdoor shows, like this one at MCD’s summer series.

With Dirty Computer, Monáe rose into the stratosphere of the pop heavens, and her concert here is anticipated with the type of fizz from a crowd who are going to give just as much love as she found on Worthy Farm.

Descending a white staircase crowned with a sparkling mic stand, Monáe’s presence is electric. The track Screwed slams from the speakers, with visuals of riots in the streets on the screen. Then dancers shoot the crowd with water pistols as she announces: “I’m tired of Republicans telling me how to feel.”

Sitting on a gold and red throne, Monáe is one for drama and spectacle, just like her mentors, Big Boi and Prince, with the latter working on that most recent album, Dirty Computer, before he died in 2016.

Serving a type of emphatic, forceful, euphoric power, Monáe is as inventive as she is exhilarating. Citing the importance of performances becoming memories embedded in people’s psyches, a flock of phone torches goes up among the crowd and her guitarist wails the outro to Prince’s Purple Rain.

With the tune PYNK, Monáe and her dancers emerge wearing those trousers that made the song’s video an iconic piece of visual art. The set is relentless, a tailspin of choreography and energy. She straps on an electric guitar for Make Me Feel, moonwalking across the stage.

By the time she invites audience members to jump on stage and dance, the divide between performer and audience has been breached, but there’s more to come.

With the curfew approaching, she says she’s going to sing until her mic gets cut off. Something magical is about to happen. With absolute power and control, she implores the whole audience to crouch on the ground – they obey – and climbs the barrier, striding on hunkers through the audience before everyone leaps to herald the closing bars before the sound does indeed get cut off, and she and her band finish by the skin of their teeth, bowing to the crowd.

In a pop landscape dominated by black women, queer women, and black queer women, Monáe stands out as a singular, captivating artist. She may feel like a very contemporary musician, but the history of black music permeates her work, from the funk of Prince, to the soul of James Brown, to the eclecticism of Grace Jones, to the rock outs of Hendrix, to the surrealism, prog and Afrofuturism of Sun Ra. Psychedelia and sci-fi are situated alongside queerness, her pansexuality, and feminism. And then there’s the wildness of Atlanta’s ever-innovating music scene, a fertile ground that pumps our curveballs like t-shirt canons at a Braves game.

Tonight she showed Dublin a type of alchemy that very few possess.

Saoirse Ronan, a self-assured cover star since the age of 13
7

The wise man, a short story by Donal Ryan
9

Bad sex in the movies: from Top Gun to Fifty Shades
Real news has value SUBSCRIBE