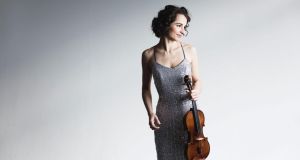 James Taylor, Tom Ó Drisceoil
St Mary’s Cathedral Chapter House, Kilkenny; 4pm; €15/€10; 086-1777017
For all the growth in the worlds of early music and period performance, harpsichord recitals are still something of a rarity in Ireland. And recitals for two harpsichords are rarer still, although the Royal Irish Academy of Music’s Baroque Ensemble did give an outing to Bach’s Concerto for four harpsichords late last year. Music in Kilkenny is now offering, in the intimacy of the Chapter House at St Mary’s Cathedral, an all-German programme of two-harpsichord works played by James Taylor and Tom Ó Drisceoil: JCF Fischer’s Le Journal du Printemps and Suite No 1 in C, Krebs’s Concerto in A minor, and Bach’s Concerto in C minor, BWV1061a.

Irish Chamber Orchestra/Jörg Widmann
University Concert Hall, Limerick; 8pm; €25/€22/€10; uch.ie
Keyworks is the title the Irish Chamber Orchestra is giving to the preview of its upcoming concert at the Heidelberger Frühling (Heidelberg Spring) festival, in Germany. The soloist in Mozart’s Piano Concerto in A, K488, is the great Georgia-born Elisabeth Leonskaja, whose belated Dublin debut, in 2009 (in Beethoven with the National Symphony Orchestra) prompted me to write of her “near miraculous balance between old-world nobility and adventurous individuality”. As well as the Mozart she’ll be performing in Jörg Widmann’s Fieberfantasie (Fever Fantasy) for piano, string quartet and clarinet (Widmann himself). The rest of the programme follows Widmann’s deep passion for the music of the German romantics: Weber’s Clarinet Concertino, Mendelssohn’s String Symphony No 13 and Schumann’s Second Symphony. Between Limerick and Heidelberg the orchestra also appears in Essen, playing Weber, Widmann and Mendelssohn on Sunday, March 25th.

RTÉ National Symphony Orchestra/Clemens Schuldt
NCH, Dublin; 7.30pm; €15-€35/€13-€31; nch.ie
Appalachian Spring, the ever-popular ballet Aaron Copland wrote for Martha Graham in 1944, is an interesting test case for widespread assumptions. It’s a wartime work but has nothing to do with war. And the composer liked to tell of people who came up to him to say, “When I listen to that ballet of yours I can just feel spring and see the Appalachians.” But when he wrote the music, he said, “I had no idea what Martha was going to call it. Even after people learn that I didn’t know the ballet title when I wrote the music, they still tell me they see the Appalachians and feel spring. Well, I’m willing if they are.” The RTÉ National Symphony Orchestra’s performance under the visiting German conductor Clemens Schuldt opens a programme that also includes Khachaturian’s 1940 Violin Concerto (with the wonderful Alina Pogostkina as soloist) and the teenage Shostakovich’s First Symphony.