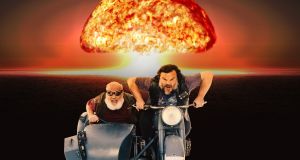 Join Margie Jean Lewis, Simon Cullen and Chloe McHugh as they guide you on a meditative evening of music and restoration. You have the option of sitting or lying down during the performance, during which musician and sound therapist McHugh will work with gongs, singing bowls and other instruments, Lewis will provide ambient vocals along with violin looping and manipulation, and Cullen will fill the room with immersive electronic music. Guests can feel free to bring their own drinks, mats, pillows and blankets to the event. LB

Skipping the grey of January, the good-time kids from Telephones are all revved up to assist you in making the most of your weekend for their first party of 2020. Specialising and heartily dealing in disco, Brazilian, Afrobeats, boogie, funk, hip-hop, house and world music, they tend to attract a fun-loving crowd every time. On the night, you can catch Papa Lou, Calum Kennedy and Sulan and Naoise taking turns behind the decks. Tickets are priced from €5 and doors are from 10pm. LB

Unsurprisingly, comedy rock has neither a good name for itself nor a sizeable success rate. Add to the pile of misfires that started in the 1960s with the debatably humorous UK group The Barron Knights, we are now at a point where Tenacious D – who have been around in some form for the past 25 years – are regarded as torchbearers. The two primary members, actor/comedians Jack Black and Kyle Gass, fuse metal/rock with absurdist jesting that is more puerile than anything else. If you like this sort of thing, then you will like this sort of thing. Otherwise, approach with caution. TCL

Even after a three-year hiatus (2016-2018 inclusive), UK act Bombay Bicycle Club just couldn’t shake off their fans. This time last year, following what could fairly be described as a mix of fallow solo work and non-music activities, they announced their return. By the end of last year, a comeback single, Eat, Sleep, Wake (Nothing But You), was announced as the first song from their recently released fifth album, Everything Else Has Gone Wrong, their first new work in about six years. Gig announcements have been greeted with the sold-out signs. Red carpets have been rolled out. And so on. It all goes to show that you can rarely keep a good band down, and this time around you can say with some truth: welcome back. TCL

Following on from their sold-out event in January, G005 coincides with Rag Week, and they’ll certainly be serving up some riches. In the main rooms, Belfast-born but Glasgow-trained Hammer (Feel My Bicep/Sulta Selects) will be getting to grips with house and techno, while Belfast DJ and multi-instrumentalist Peter Brien aka Brién (Soft Boy Records and Pear) will be spinning hip-hop, jazz, neo-soul, broken beat and house tracks upstairs. Tickets are priced from €12.16. LB

Listen – anyone who’s a friend of Shura’s is a friend of ours, and so let’s give Lily Somerville and Megan Markwick a warm howdy-doody as they walk onto the stage at this sold-out gig. Fusing warm vocals, supreme pop music and ambient electronica, the pair have been in Dublin before (they supported Sigrid), but tonight is their night. Expect songs that, noted The Observer’s Kitty Empire in her review of Ider’s debut album, Emotional Education, last year, “ping confidently around the post-genre electro-pop landscape”. Special guest is the very fine Irish singer-songwriter Eve Belle, who will be performing new tracks (Smithereens, Homesick) and older tunes. TCL

FLOAT DOWN THE LIFFEY
The Sugar Club, Dublin

As nightclubs continue to shut their doors and dancefloor space becomes even more limited in Dublin, Float Down the Liffey is a mixed-medium show celebrating the remarkable music scene that perseveres. Syncing a dialogue-free film with live performed music, this event brought to you by DabbledooMusic aims to remind the audience just how diverse the music community is. The score, written by Chris Rooney and Alex Borwick, will be performed by Rooney, Borwick and Brendan Doherty on the night. LB

Rarely have two musicians worked together as well as Ryan Vail and Eoin O’Callaghan. The former has released electronic music that can sit side by side with the likes of Ólafur Arnalds and Nils Frahm, while the latter has released song-based music under various group guises. Together, however, they have broadened the remit of what it means to make politicised music. “If you’re going to write about something,” Vail said recently to New Sounds magazine, “then write about something.” The result – released last year – is Borders, a criminally underrated album that blends polemic with poetry, ambient music with melody. An audio-visual treat for the senses? Step right up. TCL

“Folk has a new Pied Piper,” wrote the Guardian almost 14 years ago when Co Wicklow musician and songwriter Fionn Regan released his debut album, The End of History. What has happened since is more down to Regan not wanting to be the Pied Piper of anything rather than a decline in quality. Indeed, if anything, Regan has developed into one of the country’s most assured songwriters, with superb albums (2011’s 100 Acres of Sycamore, 2017’s The Meetings of the Waters, 2019’s Cala) delivering a treasure trove of delicate, finely woven songs. Special guest is Dubliner Aoife Nessa Frances, whose recent debut album, Land of No Junction, is a beaut. Both Dublin shows are sold out. TCL

Texan post-rock band Explosions in the Sky have spent the past 20 years presenting what they term “cathartic mini-symphonies” to anyone that cares to listen. The band’s instrumentals have been featured on many movie and TV soundtracks (The Kite Runner, Friday Night Lights), so we’re guessing you’ve heard the music even if you’re not fully aware of the musicians behind it. With no obvious signs of a new album (their most recent is 2016’s The Wilderness), we can expect a trip through the back catalogue. Special guest is US songwriter AA Williams. TCL

There was always something reassuringly comfortable about Supergrass, the Oxford group that got caught up in the Britpop scene, and who enjoyed chart success with albums such as I Should Coco (1995), In It for the Money (1997), and Supergrass (1999). Five years after their Ramones-referencing, punningly titled 2005 album, Road to Rouen, however, they split up, leaving singer Gaz Coombes to reap some solo reward with three robust pop albums. Whatever grievances occurred in the past, however, have been resolved and, with a new compilation album (The Strange Ones, 1994-2008) plugging the band’s tour dates, it seems Supergrass Phase 2 is well under way. NB: the Dublin shows are sold out. TCL

In a quest to help you find your soul connection, H&G are bringing together the elements of water, earth, air and fire via art installations by Dodeca, music, food and glitter, so that the cosmos can work their matchmaking magic. In other words, put on your finest gladrags for a party that will tickle all of the senses. With house, disco and pop music provided by Przem, Mother’s Rocky T Delgado and more, hopefully the stars align for all attending in more ways than one. LB

Making their grand return to Ireland after their appearance at last year’s All Together Now, London noisemakers Black Midi – one of 2019’s biggest breakthrough acts – are making their headlining Dublin debut in the Button Factory. Their debut album, Schlagenheim, was nominated for the Mercury Prize and they’ve generally been tearing apart any venue they’ve graced their presence with. So with all that high praise, this gig is, of course, sold out, but keep an eye out for people selling tickets through #ticketfairy on Twitter. LB

Jerry Fish has been part of the Irish music landscape for over 30 years, and yet there are no signs of audience fatigue – as the guy in the radio ad says, he must be doing something right. Much like the rest of us, perhaps, throughout the years he has been ducking and diving, but you don’t survive by that alone. What Mr Fish has, then, is a genuine Master of Ceremony vibe, a distinctive voice, more than several good songs, a few great ones and a compelling stage presence. The man is also a committed plugger of his art – the latest is a lovely shop-worn cover of Daniel Johnson’s The Story of an Artist. Expect to hear this and much more at these shows (and at further gigs in March). TCL

Eh? “Fashion-rock”? What fresh hell is this? Actually, no, hold on – come back. What we have with this Canadian music act is a love of flair and theatrics crossed with a presentation of punk/rock/pop that brings to mind a Stooges/New York Dolls/My Chemical Romance hybrid. Named after a 1950s Toronto dancehall, and dressed to the nines in satin and tat, the trio (Remington Leith, Sebastian Danzig, Emerson Barrett) put on a helluva show. They are also the only rock band I’m aware of to have merchandise that includes pyjamas, socks, necktie scarves, sunglasses and make-up products. TCL