Is this the Eurovision winner? Dara Ó Briain and, er, Russell Crowe love it 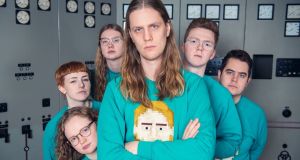 Eurovision 2020: Daði & Gagnamagnið are front runners with Think about Things

This year’s Eurovision Song Contest may be more than two months away, but Iceland has emerged as an early front runner, with its entry taking social media by storm.

Over the weekend, Think about Things, by Daði & Gagnamagnið – rough translation: Dadi & the Data – was selected to represent the country in a public vote. Now the synth-pop earworm and its accompanying music video have caught the attention of everyone from Russell Crowe to Dara Ó Briain.

The video, which has clocked up millions of views on Twitter, features the band performing the song in a living room in front of a bemused family. They wear identical sweatshirts, perform Napoleon Dynamite-style choreography and play the keytar. In other words, it’s everything one could ever want from a Eurovision entry.

Daði Freyr formed the band specially for the competition; it consists of his wife and sister and some friends. This is not their first time at the Eurovision rodeo. In 2017 they narrowly missed out on representing Iceland when they finished second in the country’s national song competition.

Posted this late last night, worth a bump again. Iceland's brilliant Eurovision entry for this year. Even better when you know it was written to his 10 month old daughter. https://t.co/JagmIeLoAe

Freyr told ESCBubble that the song’s lyrics are inspired by his baby daughter. “I am talking about the feeling you get in the first few days and weeks where you know that you love this person with all your heart even though you don’t really get that much interaction,” he told the website. “In the start she doesn’t do so much, so I am very excited to know what she thinks about all kinds of things.”

The song’s unexpected virality has even prompted sceptics to suggest that Netflix is behind its success. The streaming service is reported to have sponsored Iceland’s national song contest and is set to release a Eurovision-themed comedy this year. Starring Will Ferrell and Rachel McAdams, Eurovision follows two Icelandic singers as they represent their country at the song contest. Could the success of Think about Things all be part of an elaborate plot to generate publicity for the film? The fact that it is even being suggested illustrates just how popular the song has become.

The Eurovision Song Contest final takes place in Rotterdam on Saturday, May 16th. Over the past few weeks, a number of participating countries have unveiled their entries. Notably, the United Kingdom decided to eschew a public vote after a string of poor showings at the contest. Instead, it enlisted the BMG record label to select its entry. Last week, it was announced that singer-songwriter James Newman will be the UK’s representative in Rotterdam.

This year’s Irish entry will be revealed this Thursday. The song will make its debut on 2FM Breakfast with Doireann & Eoghan and will be performed on The Late Late Show this Friday.

Philly McMahon, one of the founders of the acclaimed Thisispopbaby theatre company, will be creative director for this year’s Irish entry. Philip Connaughton will choreograph the performance.

Whoever represents Ireland will be hoping to improve on last year’s Eurovision performance. In 2019, Ireland failed to progress to the final, Sarah McTernan’s 22 finishing last in its semi-final.