Ian Wilson on why RTÉ needs to ‘take chances, be ahead of the curve, be a leader'

He steered Dave Fanning and Gerry Ryan to fame and helped devise ‘Mrs Brown’s Boys’, but as he prepares to leave RTÉ, producer Ian Wilson chides the national broadcaster for being risk-averse 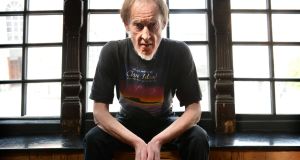 Radio head: Ian Wilson, who will leave RTÉ in 2018 after 40 years with the station. Photograph: Dara Mac Dónaill

Everyone in the RTÉ canteen seems to know Ian Wilson. The radio producer has a nod and words for every table, from the production team taking a break from recording All Round To Mrs Brown’s to a group armed with spreadsheets and calculators. There’s even a few words in Polish for the woman at the till.

RTÉ is Wilson’s domain. In 1979, when the broadcaster launched Radio 2, he came out here armed with a genetics degree from Trinity College. He’s been here ever since.

He’s seen the relaunches and the rejigs, witnessed the arrival of new station names and logos, and witnessed the U-turns along the way.

Through all of this change, Wilson has been a constant, overseeing the night-time shows when Dave Fanning and Gerry Ryan were getting into their stride in the 1980s, and throughout it all he has pushed an agenda for Irish acts.

Wilson has always had strong views about what the station should be doing, even if station bosses and managers would wish he’d just shut up and stay quiet. You can say many things about Wilson, but shutting up and staying quiet is not one of them.

Wilson will leave RTÉ in 2018. He doesn’t use the word “retiring” during our interview and it’s hard to think of this idiosyncratic, colourful livewire actually downing his biro and cycling out the gate of Project Montrose for good.

As he looks back on nearly 40 years in RTÉ, he circles back again and again to why the broadcaster should take more risks.

“Public broadcasters only succeed by taking risks and taking chances. They fail if they follow the herd. If you want to imitate McDonald’s, they are going to f**king slaughter you, which is what happened to RTÉ when they went down the commercial radio route.

“RTÉ succeeded when they took chances. When they put Gerry Ryan on in the 1980s, when they put Gay Byrne on back in the 1970s, they won in spades. When it was timid, pathetic, cowering and following the herd, it failed. This is not rocket science, this is a proven model.

“You should take chances, you should be ahead of the curve, you should be a leader. If you’re not, you will not take on the commercial competition. If you want to do market research-led, heavily organised, publicity-driven radio, you’re going to lose every time.”

Wilson arrived in RTÉ after running gigs and open-air shows as a student in Trinity College in the 1970s. He put on gigs with Planxty, Mushroom, Spud, Tony McMahon, Louis Stewart and dozens more. He brought in The Clash, The Stranglers and Al Stewart.

“It was a real buzz, but very stressful because I was a full-time student with a part-time job, which involved running three gigs a week for over 1,000 people.”

A year after he left college while writing for In Dublin, he saw an ad for RTÉ Radio Two.

“They were looking for someone who was into music, was highly educated and who knew about radio. Bingo, that was me.”

Wilson arrived at the birth of the new station. “Why it worked was that the old-school, wise, showband, showbiz heads like Bill O’Donovan involved us newcomers fully. We drew up the schedule and it was half existing RTÉ people like Pat Kenny, Vincent Hanley, Ken Stewart, Larry Gogan, and half pirates like Gerry and Dave.”

The first session was U2 in 1981. They were good lads, they were young and keen

He was put on the Fanning show and the pair formed a partnership that helped shape that radio era. Wilson took over the station’s recording studios – “they were fantastic studios, well equipped with top-of-the-range equipment, and they’d been sitting idle for five or six years” – and brought in new bands for sessions.

“The first session was U2 in 1981. They were good lads, they were young and keen, and we were supporting them already on the station. No contract, no guarantee, we said we’d play it once and put it away because it was to try out the studio. They did 12 or 14 takes of four songs which got one play and have never seen the light of day again. It sits in the archive, U2 have a copy, I have a copy and that’s it. Probably worth a lot of money but, f**k it, no one’s going to get hold of it.”

The 1980s were a golden age for the station and especially the night-time shows.

“We started to establish our credibility. We started to associate ourselves with new music, we were giving opportunities to bands in a new way, we’d gone beyond Dublin, we’d tied ourselves in with the indie movements. Fanning has a great reputation, he became respected as a great music interviewer.

This was not po-faced, this was not the station of the cross, which RTÉ was seen as at the time

“We had Gerry Ryan and Mark Cagney around us so there was a throughline. We had everything going for us because we had stumbled on something that other radio stations used all the time. You had a show where you discovered a new act and then Gerry would take it over and it would drift into daytime.

“Because we took chances and made risks, the audience loved us. This was not po-faced, this was not the station of the cross, which RTÉ was seen as at the time.”

Wilson kept taking chances. He instigated events like the Cork Rock showcases in Sir Henry’s, the Lark in the Park live gigs and the Beat on the Street open-air discos (“The larks made Dave a big star and Beat on the Street made Gerry a megastar.”) He got heavily involved in such European Broadcasting Union (EBU) projects as Eurorock and Eurosonic. He played a major role in the station’s dance music initiatives in the late 1990s and the video production which went hand in hand with that.

He also helped introduce Mrs Brown’s Boys to the world.

“I was thrown off the Fanning show because they decided it was time for me to do something on daytime and sent me off to produce the Gareth O’Callaghan show. We’d a dip in the show around 3pm so I commissioned a soap opera. Gareth introduced me to Brendan [O’Carroll] and Rory [Cowan] and said they’d an idea called Mrs Brown’s Boys and they sold it to me.

“They came in for the rehearsal and the woman who was supposed to play Mrs Brown couldn’t come in so Brendan did that. At the end of the rehearsal, I said to him, ‘Don’t bring in that woman, that was perfect, you do it.’ That was Mrs Brown’s Boys. Don’t shoot me.”

His run with 2fm ended with Breakfast Republic.

“I walked out of 2fm after that, I had a disagreement with [station head] Dan Healy and walked, which I felt a bit guilty about because I think Breakfast Republic had quite a lot going for them, and I should have done better for them. I hold my hands up there. But I had a row with Dan Healy over his approach to music and just walked. It was mutual – he was happy enough to get rid of me,” he says laughing.

He moved to RTÉ Radio One where he produced The Business show and, most recently, CountryWide.

“For many years, I specialised in music production and new music. Now, I produce agriculture programmes.”

“I applied for gigs in BBC Radio One and worked on submissions for a couple of licences, but we didn’t get them. God, I’d get fired for that, but I don’t care at this stage.”

Yet he remained at RTÉ despite everything.

Kicking against the pricks

“I like being the awkward one, the one kicking against the pricks, but I like the security of a place like this too,” he says. “If you’ve enough intellect and ability and you move fast enough, you can survive in here.

“My thing was to look around and see what structures worked and try to use them to your benefit. The inertia of an organisation cuts both ways – find a way to cut through the inertia and use the structures and infrastructure and facilities and capital resources to do what you really want to do. I could harness those resources and whatever wit I had and whatever association I had to get things done. And that’s what I did.”

What would 2fm look like with Ian Wilson as boss?

“I’d put more edge in, as it’s too safe and lame. You also have to be careful and take account of who your audience is ... It’s a very fine balance.

“I’d play music. I know that sounds obvious, but you’d be surprised. Strict playlists, but people would have a musical identity about their programmes. More Irish music. That piece on how little Irish music was on 2fm that you did gave them a shock, gave them a real fright, and they now realise you have to support Irish music.

“The people they have are all right, to be honest. I’d take the breakfast crew off breakfast and move them to the middle of the day and tell them to run riot. Jenny and Nicky would be on breakfast. Tomorrow. I’d force them on, I wouldn’t give a f**k what they’d say. They would clean up. Jenny Greene is brilliant, she’s a star.

“I’d move Eoin McDermott up the schedule. He’s a big music fan and he could be very good with a bit of direction. Chris and Ciara would be in doing drivetime. Run riot, take risks, do what they want. Lovely, bright, brilliant people.

“I would make the evenings music, music, music, and would not be afraid to have David Fanning in there to curate stuff.  Dan Hegarty and Mr Spring ... All of these people are the talent – they should be the driving force of what we do.”