I Useta Love Her: How the song that rhymed Mass and ass became an Irish anthem

The Saw Doctors song, released 30 years ago, went on to conquer all before it 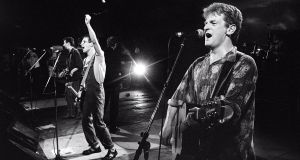 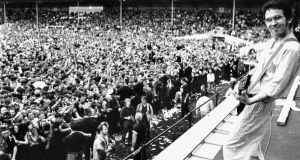 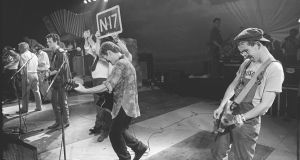 When I was young and stupid I hated the Saw Doctors. For the briefest of spells in the late 1980s we were even rivals on Galway’s music scene. I say rivals but that would suggest they knew who I was. They almost certainly didn’t.

I was the drummer in – what I thought was – an effortlessly cool indie band that played our own impenetrable material with the odd cover from carefully curated bands such as the Velvet Underground and Jonathan Richman and the Modern Lovers in dingy venues to shuffling shoe gazing crowds of rarely more than 100.

The Saw Doctors, by contrast, played much larger Galway venues to much larger crowds and had much more craic than my band. But they were not, by any measure, cool. Not like us.

I remember they released their first single in the spring of 1990. It was called N17, after the road from Tuam to Galway of all things. “Ridiculous,” I probably thought as I flicked through the pages of NME and Melody Maker judgingly while wearing my not-at-all ridiculous uniform of outsized woolly jumper, 10-hole Docs with red laces and black trousers which may or may not have been tucked into the boots for added coolness.

I was definitely certain that The Saw Doctors were going nowhere, save perhaps, back up the N17 from whence they came.

I went off on my J1 that summer and shared a lovely studio apartment overlooking Boston’s Fenway Park with 14 other Galway students and didn’t give The Saw Doctors much thought – sure why would I? There was no internet back then and virtually no way to keep in touch with home, although my dad did send me copies of The Irish Times and recording of Eamon Dunphy famously throwing a pencil in a TV studio during Italia ’90, so I wasn’t completely out of the loop.

Fast forward to the end of September of that year when my dad picked me up from Shannon in the early morning. Driving home in the gloom of an Irish autumn he turned on the radio.

“I have fallen for another she can make her own way home,” someone sang in a thick west of Ireland accent.

“It’s The Saw Doctors,” my dad exclaimed. “This is brilliant!”

How does my dad know who The Saw Doctors are? Why are they on the radio? Why is he saying they are brilliant? What are they singing? Why is my dad singing along? What number are they in the charts? One? WHAT IS HAPPENING?

All these questions raced silently through my head as the band played on. It was the first time I heard the song. And I hated it. Or so I told myself. But with each further listen in the months that followed I found myself at first humming along and latterly singing along. In secret obviously – I couldn't let any of my cool spliff-smoking friends know I was developing uncool tendencies.

The more I listened to it the more I loved it and everything about it from the infectiously joyous music to the lyrics which were in equal measure irreverent, edgy, funny, creepy and beguilingly smart. You could also sing and dance to it in a pub – but I was far too cool to let my hair – which I had loads of – down in such a unseemly fashion.

I didn’t realise it then but The Saw Doctors were on the road that would see them writing songs which captured like a Polaroid what it was like to live in the west of Ireland in the 1980s and early 1990s.

It was an almost uniquely homogenous society back then, a place where being Protestant was as exotic and multicultured as it got. We all knew the people who had done the 48-hour fast for Concern and we all knew what it was like to be hormonally charged and eying up the objects of our desire to alleviate the endless boredom of a Sunday mass. But it was only The Saw Doctors who had the wit and the balls to picture a woman going up to communion and then rhyme Sunday mass with “the glory off her ass” in a fashion which would have enraged the one time Bishop of Galway Michael Brown, if not necessarily the other time Bishop of Galway Eamon Casey.

“I walked right up and made an ostentatious contribution. And I winked at her to tell her I’d seduce her in the future. When she’s feelin’ looser” – not perhaps a lyric that would sit comfortably on a Hozier album but all the better for that.

And in case you’ve forgotten, why the singer fell out of love so swiftly and perhaps brutally with his “obsession”, was because even though the “thoughts and dreams I had of her would take six months in confession” he’d simply moved on.

He “met this young one Thursday night” – in the Warwick, I’m guessing – “and she’s inta free expression. And her mission is to rid the world of this sinful repression. Then we had a session.”

Never would I have guessed back then that the song would be as timeless as it has turned out to be and I would be singing its praises in The Irish Times 30 years later or that I would still be able to sing it without missing a word or a beat much to the, um, delight (?) of my wife.

But I Useta Love Her was no one-hit wonder in the wilderness of rock’n’roll – to steal a jingle from the peerless Larry Gogan – and The Saw Doctors were no flash in the pan. They were able to write funny songs and sad songs and deadly serious songs and songs full of heart – Clare Island and To Win Just Once, to name just two.

A year after I Useta Love her was released, I blagged my way into the Féile rock festival in Thurles with Toasted Heretic – another Galway band who were chalk to The Saw Doctors cheese but not necessarily any better for that, just different. The drummer Neil Farrell secured me an access all areas artists pass. I thought I was the business, at least until I was thrown out by security with the band’s lead singer Julian Gough for reasons which are properly lost in the mists of time.

Hours before that unpleasantness, I saw The Saw Doctors play to what was most likely their largest crowd to that point. I wanted to hate them but it was impossible. How can you hate a band who write a song that has tens of thousands of people shouting “Bale em, bale em, hay, hay” as they wildly mosh in the summer sun scatting haystacks to the four winds?

But that’s all beside the point really and it’s moving away from the Birthday Song. It’s 30 years today that The Saw Doctors really began to play and I Useta Love Her is still an Irish classic and one of the biggest selling records in Irish music history. It deserves all the birthday cake and Buckfast it can stomach today. I useta love it once. I still do. I probably always will.