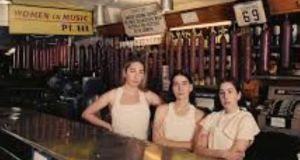 The title of their third album may be primarily a jeering nod to the journalists who persistently ask them the inane question, “How does it feel to be women in music?”, but Haim have a point to make.

A few years ago, not long after the release of their second record Something to Tell You, the Los Angeles sisters fired their booking agent after discovering they were being paid 10 times less than a male artist on the same festival bill. As they put it on album track Man from the Magazine – a song that’s part-laundry list of the sexist comments they’ve faced, part-scathing riposte – “I don’t want to hear ‘It is what is it’; it was what it was.”

1 John Cleese has a faulty sense of humour about the Irish
2 World, look away now – these are dark days for the United States
3 Health officials ‘very concerned’ about foreign travel, says Donnelly
4 Why are markets booming when a crash is on the way?
5 Michelle O’Neill will not step aside ‘under any circumstances’ despite calls from other parties after Storey funeral
6 ‘Ten of the best books set in Ireland’: Does the Guardian get it right?
7 Bobby Storey: The IRA's planner and enforcer who stayed in the shadows
8 How much do Irish people earn? And what will Covid-19 do to our wages?
9 ‘Grossly irresponsible’- Waterford mayor condemns house party of 60 people
10 Irish holidaymakers have been thrown under the bus
11 Sex, swearing and flushing the loo: 10 films that broke taboos
12 ‘I felt something furry move under my hand. Man alive, I am terrified of rats’
13 Who are the new junior ministers? All their profiles are here
14 Trump says Covid-19 will disappear after US reports record increase
15 Sentence for attempted murder by teen in Dun Laoghaire too lenient, court finds
16 Open Ireland as soon as possible - Tourism chief warns of 'catastrophic' impact of pandemic
17 Shared parenting: fathers being forced to go down ‘adversarial route’
18 Full line up of junior ministers unveiled as Taoiseach accused by one TD of snub
19 Netflix: 10 of the best new shows and films to watch in July
20 Woman who said ‘I have the virus’ and coughed in direction of paramedics jailed
21 Dunnes Stores trials online ordering from Cornelscourt outlet
22 Thousand acre Offaly farm guiding €9m biggest land sale in years
23 Could your old car be giving away all your secrets to its new owner?
24 In turmoil on and off the pitch: Where did it all go wrong for Barcelona?
25 Limerick people ‘grossly insulted ’ by Micheál Martin appointments, says Willie O’Dea
26 Irishwoman in Athens: ‘Being stuck in Greece isn’t exactly a hardship’
27 Newton Emerson: A unionist-free Seanad? Nobody minds really
28 How the Government can woo young Sinn Féin supporters
29 Husband of Jean Eagers charged with her murder
30 Dara Calleary given Gaeltacht responsibility after controversy over Cabinet snub
31 Tánaiste questions number of construction workers on pandemic payment
32 Up to 400 jobs saved in Cavan as MML takes stake in CG Power Systems
33 Trophy Curragh stud farm with exceptional pedigree for €4m
34 Permission sought for €150m film and media campus in Wicklow
35 ‘I wouldn’t fly if I didn’t think it was safe’ says passenger boarding flight at Dublin Airport
36 Covid-19: Publicans and restaurateurs row over calls for VAT cuts
37 Dog gone. Brazil president’s mascot has 15 minutes of fame
38 Galway Clinic gets orders dismissing action over board decision
39 Ireland’s Covid dead: Bill Taylor was a Bohemians player and a man of learning
40 Who is in the new Cabinet? Members in profile
Real news has value SUBSCRIBE