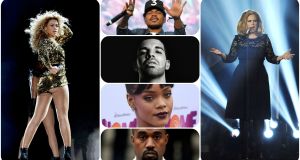 The nominations for the 59th annual Grammy awards, which will be handed out on February 12th, had some expected outcomes – Beyoncé dominated, with Lemonade and its affiliated properties garnering nine nominations, while Adele’s 25 scored her five nominations. As with any attempt to winnow down pop music to some semi-arbitrary notion of “bests”, though, the real stories come from what might be missing.

Perhaps the most quixotic of the Big Four cross-genre categories was album of the year. Adele’s mega-selling 25 and Beyoncé’s conversation-altering Lemonade were pretty much givens for this category; Nashville fringe-walker Sturgill Simpson’s epistolary A Sailor’s Guide To Earth, too, was a somewhat expected honoree. But in an eligibility year when so many artists – Rihanna, the late David Bowie, even Kanye West – crafted albums that represented creative leaps, rounding out the category with Justin Bieber’s Purpose and Drake’s Views, two albums that were commercial smashes but decidedly uneven craft-wise, seemed almost like a defiant act.

In past years, the Grammys have been mocked for being out of step with the pop times – recall Herbie Hancock’s Joni Mitchell tribute beating out Amy Winehouse’s Back To Black in 2008, or Steely Dan’s Two Against Nature edging out Eminem in 2001, or even 2015, when Beck’s tranquil Morning Phase topped Beyoncé’s self-titled album.

Nominating Purpose, Bieber’s redemptive plunge into pop-EDM, and Views, which smashed streaming records upon its release in April and just passed the quadruple-platinum mark, would seem like a rebuke to those observers who believe the Recording Academy to be populated exclusively by old-guard types whose favourite artists have remained etched in stone since the 70s.

That both those albums were nominated, though, while Bowie’s omnivorous parting statement Blackstar was left out in the cold seemed like the biggest snub; Rihanna’s Anti, a withering statement by a major star showing off newfound range, would have been a better pop choice.

Perhaps the general bloat and navel-gazing of Views appealed to those voters who prefer albums by overly ponderous dudes who treat the women in their lives as mere inconveniences – or maybe they were just dazzled by its ability to dominate streaming charts for months.

Song of the year

Chart-dominating women and guitar-assisted men in pensive mode are all over the song of the year and record of the year nominations. Adele’s world-conquering Hello and Beyoncé’s potent Formation grabbed nominations in both categories, as did Danish act Lukas Graham’s nostalgia whinge 7 Years. Rounding out record of the year, which is given to the people behind a song’s recorded version, were Rihanna’s sinewy (and Drake-assisted) Work and rock duo Twenty One Pilots’ sour Stressed Out; Mike Posner’s lightly neurotic I Took A Pill In Ibiza, which received a new lease on pop life after being remixed by the EDM duo Seeb, and Bieber’s spiteful Love Yourself filled out song of the year, which goes to songwriters.

Best new artist, the final category of the Big Four, has a fairly strong field. Kelsea Ballerini, who specializes in twangy refashionings of mid-tempo pop, and winking upstart Maren Morris, who brings power-pop and reggae influences into her sprightly songs, represent Nashville’s new guard of up-and-coming ladies. Anderson .Paak’s kitchen-sink music fuses funk, soul, hip-hop and anything else the omnivorous rapper-singer can get a handle on. The bro-EDM duo The Chainsmokers, whose laconic Closer had an iron grip on the top of the US pop charts this year (and who were nominated even though their crashing 2014 single #SELFIE soundtracked a slew of TV montages showcasing snap-happy millennials), and the Chicago MC Chance the Rapper, whose third mixtape Coloring Book fuses gospel, hip-hop and magical realism in a thrilling way, are the category’s two biggest names.

The Grammys’ attempt to throw their arms around the musical world is borne out in its genre-specific categories, which can range from the satisfying to the perplexing. The R&B categories show how strong of a year the genre has had, honouring artists like Fantasia and Solange. The new-ish best urban contemporary album, which pits Lemonade and Anti against Anderson .Paak’s Malibu, R&B trio KING’s sumptuous debut We Are KING, and velvet-voiced crooner Gallant’s Ology. Best rap/sung performance also has Beyoncé (this time, for the defiant Kendrick Lamar-assisted track Freedom) and Drake (for his meme-friendly Hotline Bling), as well as D.R.A.M.’s sparkling left-field hit Broccoli and two tracks from West’s sprawling The Life Of Pablo – the devotional Ultralight Beam (which features Chance the Rapper, Kelly Price and Kirk Franklin) and Famous, which features Rihanna as well as the Taylor Swift insult that inspired her snappish album of the year acceptance speech at 2016’s Grammys ceremony.

On the rock side of things, though, the nominations stumble over themselves. Is a previously unreleased White Stripes track (City Lights, from a compilation of Jack White acoustic recordings) really one of the best American roots songs? Did Disturbed’s unplugged cover of Simon & Garfunkel’s 50-plus-year-old The Sound of Silence really stand head and shoulders above most of the other rock performances recorded between 1 October 2015, and 30 September 2016? (And did White tip the scales for Beyoncé’s Don’t Hurt Yourself getting a nod in that category?) Meanwhile, best alternative music album this year feels like a lifetime achievement award surrogate, with Bowie’s Blackstar facing off against Iggy Pop’s Post Pop Depression, PJ Harvey’s The Hope Six Demolition Project, Radiohead’s A Moon Shaped Pool, and Bon Iver’s 22, A Million.

With 84 categories from record of the year to best music film (where the Beatles will square off against Beyoncé), the Grammys always have as much room to be off the mark as they are on target. The 59th ceremony will likely offer a sometimes-frustrating mixture of both, no matter who wins the night’s top trophies.

Best dance recording: Bob Moses – Tearing Me Up; The Chainsmokers – Don’t Let Me Down; Flume – Never Be Like You; Riton – Rinse and Repeat; Sofi Tukker – Drinkee

Best R&B performance: BJ The Chicago Kid – Turnin’ Me Up; Ro James – Permission; Musiq Soulchild – I Do; Rihanna – Needed Me; Solage – Cranes In the Sky

Best music video: Beyoncé – Formation; Leon Bridges – River; Coldplay – Up and Up; Jamie xx – Gosh; OK Go – Upside Down and Inside Out