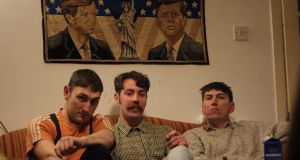 As gigs and music festivals continue to be postponed or cancelled during these very strange and unpredictable times, artists are coming up with alternative ways to create, perform and uplift through social media. Whether you’re watching streamed gigs, subscribing to curated playlists or watching movies communally through Twitter, our methods of consuming entertainment may be different but we should use this time to reassess the value that music and art brings us.

After experiencing a rush of cancelled gigs scheduled for St Patrick’s weekend, Mary Wallopers and TPM member Charles Hendy says the band’s immediate reaction was to create fun for people when they are stuck indoors. “I was just thinking about everyone being at home and I was like well, you know what, like, the people can still have a few cans or drink a cup of tea at home and we can still play a gig,” he says over the phone.

Together with band members, his brother Andrew and Seán McKenna, he decided the best way to go on with the Mary Wallopers show was to stream gigs on YouTube over the coming weeks from a bar they’ve built in their living room. While there will be a donation link on the livestream, they’re more concerned about giving people a break from reality rather than earning back the money they’ve lost.

“We are so used to being poor that we’re like okay, of course. We’ve been this poor two years ago doing music so we’re just trying to get through this,” he says. “When you’re faced with older people dying or people with immunity issues dying, that’s more important than finances.”

There’s a new sense of solidarity built into the seams of streaming and there’s no shortage of artists offering up their time and talent. Fiddler Colm Mac Con Iomaire played a gig from his own living room, a video that’s available to watch on his Facebook page, and the loveliness of that was heightened by the appearance of his cats, who sniffed and pawed at every wire.

Elsewhere, Cork band the Altered Hours are spinning records from home and inviting people to dance with them via YouTube; Cork DJ Stevie Grainger is posting live DJ sets on Twitch TV, creating child-friendly sets in the morning and party vibes at night; singer-songwriter Ailbhe Reddy released her entire discography to buy for just €8.25 on Bandcamp; and the open mic night in Galway’s Róisín Dubh has moved its Sunday night slot to Facebook Live, with each performer dialling in and playing from home.

Other artists are taking this time to set new challenges for themselves. Ciarán Bryne from post-rock band Search Party Animal is working on his first full-length project, called Music to Self-Isolate, releasing new tracks every day on Soundcloud, and Dublin alt-pop singer CMAT is dancing her way through Instagram live in the lead-up to the online launch of her debut single Another Day (KFC) on April 15th. And if you feel like expanding your skillset, synth app Moog and Korg are now free for a limited time for beginners and advanced players to mess around with.

At the moment, there is an element of keeping everyone entertained. But because we don’t know how much longer our movements will be restricted, we need to show more long-term support for musicians. Cormac Larkin, who runs the Sofa Sessions in Billy Byrne’s pub in Kilkenny, has done that by setting up a GoFundMe page to raise money for artists whose gigs he had to cancel.

“The plan is to try to pay the musicians at least what they would have been paid if they had been able to fulfil their engagements,” he says. “Since we started it, a lot of more ambitious plans have been launched by various people, but our focus is just to make sure that for any gigs we cancel, the musicians get paid anyway.

“Apart from the immediate assistance, which will be modest enough, I guess this was an opportunity to draw attention to the precariousness of the life of artists and musicians in our society,” he adds.

This precariousness is an incredibly important thing to take note of with all artists anyway, global pandemic or not. While musicians like Laoise and Emma Langford (and many, many others) have taken the Patreon route for this lull, and fans are encouraged to buy merchandise to keep a rolling income for their favourite acts, hard techno DJ Roo Honeychild and co-founder of Club Comfort has moved her skills to the new music platform Currents FM to maintain a steady source of income throughout the year.

Currents FM, which provides bespoke playlists for subscribers, is a way for club DJs or musicians to share their musical knowledge but instead of just posting their picks on Spotify or Twitter, they can earn royalties for their expertise.

“What you’re providing and what people are paying for is a humanised version of the Spotify algorithm,” she says, explaining the service in layman terms. “What’s cool for me as a DJ is that people who are like I like Roo Honeychild’s music so I’m going to follow her on Currents to get a cross-section of her tastes. So if I like her in the club, I’m going to like the music she’ll show me.”

Her income is reliant on live events, which can be seasonal at the best of times, but this subscription model is particularly vital for her now. “€2.50 a month as an asking price is less than the price of a coffee. It’s half the price of a pint of Guinness,” she says. “It’s not a lot to ask that you would ask someone that you respect as a curator or as a selector to support them long term.”

It speaks volumes that in times of the unknown, we turn to music for hope. With bars, clubs and music venues closed until March 29th – perhaps even longer – and some festivals being postponed, the artists we love are seeing their livelihoods being put on hold. For all the appreciation we’re showing them now, it’s important to remember what they gave us when everything was shut down.

“We’re good at entertaining people, I think, so the best thing we can do is to give people a bit of craic away from just everyday counting numbers and not knowing what to do and being panicked,” says Hendy. “Maybe we can just have a nationwide hoolie and not actually leave the house.

“The weird thing will be no applause after we finish singing songs,” he adds. “We’ll just have to be like wasn’t that great everyone and congratulate each other.”

While we are on lockdown, MC and Rusangano Family member God Knows shares his five-step creative guide to help us weather the storm.

1 Planning
Before we even attempt recording and performing, structure is an important but often overlooked aspect of creativity. Giving your ideas and intentions shape can provide a much-needed safety net as you explore other ways to flex your creative muscles. Strategy is a big part of what makes us effective, especially as independent artists. It all starts with an idea.

2 Inspiration quests
Going on “inspiration quests” usually means travelling but now is as good a time as any to broaden your definition of what qualifies as a source of inspiration. Imagination is everything so read, listen to podcasts and new or old albums, watch interviews and movies. This is a fantastic way to start the creative process of writing. It’s not where you take it from, it’s where you take it to.

3 Practice
Simple and difficult. There’s honestly no substitute for hard work, and taking the time to go to the mountain, sit under a waterfall and sharpen the sword is good in these times. You can always get better. Having more time than usual means you have more space to pay attention to yourself and fine tune the details.

4 Learning a new skill
Not everything has to be commodified so do something that you know you’ll have fun with. Paint, crochet, take an online salsa class even! Every hobby has a transferable skill and a new lens to see the world with and that’s invaluable, to be perfectly honest. Last time I had extended time off, I learned how to DJ and having that skill has helped me grow as a musician and a writer in ways I’ll be discovering for a while.

5 Recording
Recording has been made infinitely easier through technology and some incredible albums have been made by artists in solitude. If you are not so tech savvy, you could record demos using your smartphone so that when it’s time to lay down the tracks, the process will be much easier. Not to mention all the voice loop/garage band style apps – some of which are free – that are a great way to stretch the bounds of your comfort zone. It’s just you, your voice recorder and the limits of your imagination.