Fire and triumphalism at this year's Kilkenny Arts Festival 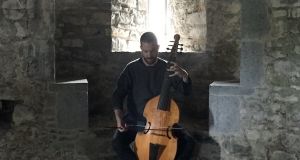 One-on-one performance is not a new idea. Jennifer Walshe’s Bed of Soft, presented at Dublin’s Project Arts Centre in 2005, invited listeners, one at a time, to enter a room and lie on a bed. But the bed was not really a bed. It was more on the lines of specially designed musical instrument disguised as a bed. And the composer, hidden from view under the bed, performed for each individual listener.

The first New Music Dublin festival in 2013 opened the doors on many of the National Concert Hall building’s smaller rooms to introduce a popular strand of 1:1 concerts. This time everything was in full view.

Kilkenny Arts Festival is now exploring a similar idea. For four afternoons over two weekends, viola da gamba player Liam Byrne sits in Talbot’s Tower and welcomes one listener at a time for a performance of five minutes or so.

The tower, part of Kilkenny’s old city wall, has a gravel floor and glassless windows which provide not only a noticeable draught but also admit the everyday sounds of the surrounding city. The “road train” that ferries tourists around the city was making its slow way past as I waited for my turn.

For me the experience of those five minute – during which I listened to an Allemande by Marin Marais – connected to a thought I had many years ago in a very different and altogether more salubrious building, at a concert in the serene surroundings of William Chambers’s late 18th-century chapel in TCD.

The beauty of the building was quite at odds with the musical experience I was having. I was almost within arms’ reach of the performers. But many of the sounds they were making seemed somehow to have been plucked out of the air before they could reach me. Instead of the immediacy of musical experience that my eyes suggested, what my ears picked up was oddly diffuse and remote.

The music I was listening to, of course, was not actually intended for public performance. I don’t remember exactly what was on the programme, but it was in all likelihood written for royalty or aristocracy, for people who could command a performance of it, and hear it played or sung in the circumstances that most suited them.

Of course, what most of us cannot do is command an actual performer. And the very special illusion of doing just that is what Byrne momentarily offered.

For a brief moment, I started thinking about how alien the idea of a command performance is to modern listeners. And then I caught myself on. It’s exactly the opposite.

We can listen to the idealised soundscapes of modern digital recordings at home, in a car, on a bicycle, deep underground in a cave, or six miles high over the ocean.

We command musical performance in a way no humans have ever been able to command it before. In one sense, even Louis XIV has nothing on what we can take for granted today.

Of course, what most of us cannot do is command an actual performer. And the very special illusion of doing just that is what Byrne momentarily offered. It is, of course, the 21st century. So it was Byrne who chose what to play, not his listeners. But it would not be too difficult to put the listener back in charge of that too.

The weekend’s big event in Kilkenny was a concert performance of Handel’s 1724 opera Giulio Cesare. And the big musical event in Dublin was a concert in St Patrick’s Hall, Dublin Castle, with Peter Whelan and his Marsyas Ensemble setting out on a path of Rediscovering Irish State Musick, that is, exploring the music that was performed and/or written in Dublin, not just by a permanent ensemble employed by the Lord Lieutenant, but also by singers associated with Dublin’s cathedrals and churches.

If you wanted a measure on how much US president Donald Trump has changed the world since January, you could not have found a better pair of events. The glorification of triumphalism, anger, vengeance and threats in the Handel, are pure Trump, and the gross sycophancy of so many of the texts in the Dublin programme (which was also repeated in Kilkenny) reflect the kind of responses we are now used to hearing from the circle around Trump in the White House.

Musically, both evenings were a real treat. Countertenor Iestyn Davies’s Caesar and Hilary Summers’s Cornelia were both of a standard to turn a well-worn piece of musical advice on its head.

Instrumentalists are often told to listen to singers for inspiration when it comes to phrasing and expression. But one of the qualities that made Davies and Summers so unusual and exciting was the almost instrumental freedom and accuracy of their delivery, characteristics which help make Handel’s often virtuosic writing shine as it should.

Conductor Christian Curnyn and the period instruments players of his Early Opera Company kept the music on a tight rein, and there were strong contributions from Anna Devin’s powerfully seductive Cleopatra, Rachel Kelly’s defiant Sextus and Callum Thorpe’s resonant Achilla.

Peter Whelan is, I suspect, at the start of what’s going to be a long journey uncovering a neglected aspect of Ireland’s musical legacy. Sunday’s programme ranged over mostly vocal works by Handel, Boyce, Purcell, Roseingrave, Cousser, Vivaldi and Corelli, before devoting most of the second half of the evening to excerpts to pieces by Matthew Dubourg.

There was a real flame in Whelan’s approach, and his soloists – Rachel Redmond, Emilie Renard, Gwilym Bowen, Nicholas Mulroy and Edward Grint – made clear that they felt the heat too. Above and beyond the actual music, he drew in theatre and opera director Tom Creed to put some theatrical flesh on the evening. He clearly wanted this largely unfamiliar music to make a big impression. In that he was entirely successful.